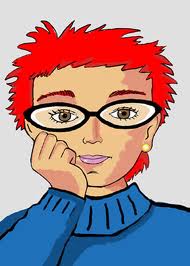 This  post is written in conjunction with the Feminist Ethics Course Dialogue project sponsored by Claremont School of Theology in the Claremont Lincoln University Consortium,  Claremont Graduate University, and directed by Grace Yia-Hei Kao.

Besides being a Feminist Ethics student, Peggy is a Physical Therapy Assistant specializing in Barnes technique myofascial release; Deacon (soon to be priest) in charge under special circumstances at St. Martin-in-the-Fields Episcopal Church, Twentynine Palms; a fourth year joint M. Div. student at ETSC/CST; a multi-moved(while her husband was off flying) military wife 20 of 43  married years; privileged oldest of four daughters of medical professionals; 21-year grateful member of Al-Anon; mother and grandmother; budding feminist;  all in no particular order of importance.

It’s never too late to be something new like a budding feminist. It doesn’t take rocket science to learn that the system oppresses its members, but it does take a clear-eyed look at privilege. “The man” keeping folks down isn’t just an excuse for school or job dropout; it may be a colloquial naming of patriarchal society.  Solidarity is action to name oppression and take steps to push back against injustice. I learned all this in grad school since the big 60th and find in it the best hope for survival of our world.

I was lucky. I was born to health professional parents in a western border state who loved and respected Mexico and her people. Holidays and vacations were spent in Mexico learning as children how not to be Ugly Americans trading on privilege but respectful guests of a culture not our own, or on a farm in Virginia in the midst of an economy based long ago on slavery and still unjust to slavery’s children. Oppression wasn’t named but injustice was. The inequities were so great that the double inequities faced by women of color at the hands of white patriarchal society were glossed over in the unfairness of separate water fountains, little to no opportunity for education; in bigotry, racism, and grinding poverty. Mom made sure we saw and understood the specific personal pain caused by the classist racist society without using those names. She taught us that we owed a debt to those less privileged.

The awareness of uneven balance of women’s experience against men’s arose in the 1960s during high school. The consciousness-raising conglomerate of civil rights, feminism and Viet Nam shaped activist concerns at the local college level and in some high school classmates. Feminists took the first clinic dispensed birth control pills, marched against the Viet Nam war, boycotted grapes, registered voters in the barrio or bussed to Mississippi. I was too timid to consider doing anything like the activism that awed and frightened me. To further confuse matters, the emerging pacifist away at college fell in love with a young Marine dedicated to serving his country in Viet Nam. Support the partner or the pacifist effort, not both. The man won an internal battle he never even knew had happened.

Meals On Wheels in the poorest part of the ghetto in Meridian Mississippi was as activist as a young mother could manage with an infant on her hip, but it was supremely satisfying. The business of college classes, small children, frequent moves and a career, privileges all, were punctuated by encounters with a single mom friend supporting her child and education as a sex worker; by living in a town composed of wealthy whites who disrespected and excluded from political power the poor Hispanics who did all the manual labor that supported the town; by recognition that there was not a single black pilot in the squadron, that macho was ugly and based on disrespect.

The system, military and business and organized religion, supported white men, then white women, then men of color, then women of color. Recognition awoke of the systemic oppression of women. Oppression recognition bubbles beneath daily living for women when they gather for lunch or book club or work. It expresses itself in man bashing, as harmful to the men caught within the system as for the women. A budding feminist recognizes the value of naming oppression to combat the disease, even when the treatment cannot be agreed upon. Even a newby feminist knows feminism isn’t about man bashing but about women teaching and supporting each other in sisterhood that all God’s children might reach their potential. Relationship, mutuality, collaboration, consensus takes more work than hierarchy, non-participatory decision-making. Change demands new skills even for newcomers. Failure can’t be an option.

The names feminists give themselves are awesome, evocative of power and grace; feminist, womanist, mujerista. The names come into being and embrace change and new meaning and let more of us into the sisterhood. Lesbian sisters experience community different from their straight sisters, have led into change critical for the world’s survival, and deserve to be honored for their activism and leadership into new feminist ethics. The feminist vision of equality and healthy systems looks to this newcomer a lot like heaven on earth, the real, now time fulfillment of God’s vision for God’s beloved children. The vision informs the work for change, inspires this new feminist to read, study, learn, and participate.  Thanks for the invitation.

Like Loading...
‹ Recession Proof Devotion By Valentina Khan
Part I: Advent as the Active Wait By Cynthie Garrity-Bond ›