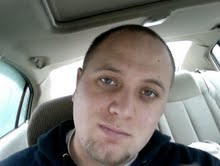 As most of us are aware by now, there is a “feminist-sextremist” group from Ukraine called “Femen.”  This group has been very controversial by their public demonstrations of nudity, the words they paint on their bodies, and their explicit condemnations of political structures and organized religions.  They were started by Anna Hutsol in 2008 and have now spread throughout Europe and the Middle East.  The question I pose for this post is: Does Femen harness or hinder the power of the feminist critique? 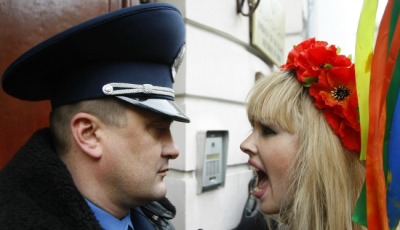 Femen is precisely the kind of movement that pushes us in our understanding of feminism, the means by which it is best expressed, and the issues surrounding moral condemnation and religious sensitivity.

First: Our Understanding of “Feminism”

Femen shows that the feminist community is not homogenous; some love them, some hate them, and some are simply undecided.  A few of the criticisms I have heard are that they are simply promoting themselves, their bodies, and not bringing about any serious social change.  The critics think Femen are just young girls wanting to be seen naked in public.  Either that, or they are damaging the image of feminism that took countless more “respectable” women to accomplish.  After all, isn’t genuine feminism the kind that pursues advanced degrees, promotes dressing modestly and professionally, and uses “brains over boobs”?  This kind of feminism, they might argue, is simply conceding to a sex-obsessed male dominated society by going topless and scantly clad.

On the other side, many see what Femen is doing and consider it absolutely necessary.  I mean, radical times call for radical measures, right?  For supporters of Femen, feminism is about sexual freedom and liberation from the norm and not puritanical chastity.  These types harken back to the 60’s sexual revolution in the United States (and if you look at many of their pictures, they often wear what resembles hippy flower headbands).  Many think they are doing important work by raising issues of prostitution, sex tourism, patriarchy, and women’s issues in Ukraine and abroad.  As Maria Mayerchyk from Lviv University said, “Femen is a “positive, radical and important phenomenon that is able to raise social issues.”

Second: The Means by which (feminism) is Best Expressed

In my opinion, much of the controversy within feminism surrounding Femen is one of pragmatic means.  Are nudity, painted bodies, and public demonstrations the “best means” for achieving their stated goal of protecting women’s rights?  Femen’s brand of activism is often referred to as “hooliganism,” which is exactly what “Pussy Riot” was charged with.  This same question of means was also asked of the now (in)famous “Slutwalks.”

The main problem that I find when the public discusses means is an either/or mentality.  It assumes that both cannot be beneficial for women in different ways.  In fact, given different cultures and societies, it is strange to even think of one way as being “best.”  However, if we put “better” on one end of the spectrum, and “worse” on the other, we can begin to evaluate Femen’s means.  We can ask ourselves, in a consequentialist manner, whether the outcomes of Femen’s activism outweighs the problems some find with it.  We can ask an even more basic question as well: Is it better to have groups like Femen or not?

One of the frequent criticisms of Femen is their lack of religious sensitivity.  Let’s see how many people we can offend with some of what they paint on their bodies: “Fuck your morals,” “No Islamism, yes Secularism, “No to Hijab,” “Fuck God,” “No Sharia,” “No Church,” “Muslims lets get naked,” “Pope No More,” and “Islamist Sadist.”  They have dressed up as half-naked nuns and sprayed canisters labeled “Holy Sperm” and “Jesus Sperm” in protest of those against the legalization of same-sex marriage in France.  They had a “Topless Jihad Day” where they wore beards and burqas and spoke out against “Islamism” in solidarity with Amina Tyler.  All that to say, many have a problem with these kinds of tactics.

It is obvious that Femen has a strong anti-religious perspective.  They belong to a kind of feminism that has long condemned organized religion in its myriad of forms.  But does this kind of no holds-barred, visceral expression harness or hinder the power of the feminist critique?  As far as I am concerned, I consider Femen a radical exercise of free-speech.  And since they are not inflicting physical pain on anyone, I cannot find any good reason to oppose them, other than simply disagreeing with some of their tactics and choosing not to conduct myself in a similar fashion.  Certainly, if we consider what they say religiously insensitive hate-speech that ought to be censored, we would also have to throw in a large list of other satirists and feminist authors that have said similar things.  Other than exceptions like shouting “fire” in a theatre, I tend to think that the possible negative effects of free-speech outweigh the evils of censorship.  But that is just me.  What say you?

Kile Jones holds a Bachelors of Theology (B.Th.) from Faith Seminary, a Masters of Theological Studies (M.T.S.) and a Masters of Sacred Theology (S.T.M.) from Boston University, and is a current Ph.D. in Religion student at Claremont Lincoln University.  He also holds a Certificate in Science and Religion from the Boston Theological Institute. He is the Founder/Editor-in-Chief of Claremont Journal of Religion (www.claremontjournal.com). His interests include religion and science, atheism, secularism, and philosophy of religion.  He also reviews books for Reviews in Religion and Theology (RRT) and is a Contributing Scholar for State of Formation (www.stateofformation.org), an academic blog for emerging religious and ethical leaders.

Like Loading...
‹ For the Love of Gaia by Jassy Watson
The Language of Flowers by Barbara Ardinger ›