To be able to walk down the street holding the hand of the one you love is a great feeling and an action that some of us aren’t able to perform without fear.

A line has been drawn in the sand between those who support gay rights and those who do not.  While some call it being on the “right side of history,” I simply now refer to it as not sounding and looking like a bigot in the halls of history and in the various books, Facebook posts, and Tweets that our children will one day read.

I’ve spent a lot of my activist life attempting to educate, or save for lack of a better term, individuals who say hateful things similar to Duck Dynasty’s Phil Robertson. In a recent GQ profile, the patriarch of the A&E series called being gay a “sin” and compared the sexual action between same sex individuals to bestiality.  Robertson said:

While this may seem like a run of the mill statement coming from someone with this man’s views and beliefs, his statement has created quite the controversy as he has been placed on permanent suspension from the show, his family refuses to film without him (something that is economically harmful to A&E since the show has broken many broadcast ratings records pertaining to reality shows and is a proverbial cash cow for the network and their investors) and, the craziest point of all, the people defending him are stating that his statement isn’t homophobic but rather an expression of his deeply held religious beliefs.

While I would usually just brush off the man’s statements as the actions of another delusional homophobe, I can no longer sit idly by when statements like his not only influence my personal life but also the way in which my human rights are restricted by a man who influences millions of people who tune into watch him on a weekly basis and buy his family’s countless products.

Does being against gay people make you a homophobe?  Yes.  Does being against gay marriage make someone anti-gay? Yes.  It is that simple.  We live in a country and exist in an academy where we can’t make value statements against those individuals standing on the wrong side of history and totally taking advantage and profiting from the homophobia they produce and I have a problem with that.

People are forming a metaphorical human shield around Robertson and the rest of his Duck Dynasty clan and I’m here to say that those individuals, defending him and toting the declaration that homosexuality is a sin are on the wrong side of history and people will not forget who stood on what side of that proverbial line in the sand when this is all over.

Is Pope Francis’ statement groundbreaking?  Yes.  Has Pope Francis, being the leader of the Catholic Church with major social, political, and cultural influence, changed any of the church dogma pertaining to homosexuality?  No – and that’s the problem.  People and groups in power need to create the change that we all need to see in the world and until they and their cohorts are willing to do that, I will not sit idly by and feel bad for calling someone or something a homophobe and leaving it at that.  The time has come for activists from all walks of life, who no longer are willing to sit by and watch as their rights are taken away from them, to take up the reins and finish the hard work that our brothers and sisters not only fought for but also died for.

Lately, this problem has become all too personal.  From Facebook status’ that declare Robertson and his clan have the right to say whatever they want because the Bible told them so, to individuals who are openly upset (as they should be) about his statements, I know now that we no longer can live in a society where people can walk the line of the homosexuality argument, examine both sides, and come to the conclusion that it is wrong based on scripture – when you’re against homosexuality and you base your reasoning on your faith that God condemns it or that you’re simply following the teaching of Jesus, you’re wrong.  Jesus never said anything about homosexuality and Jesus, a man who hung out with the poor and downtrodden, wouldn’t be hanging out with Robertson who openly preaches hate.  Jesus loved sinners and Jesus would rather be dancing with me in West Hollywood on a Friday night than lugging through a swamp luring ducks into a trap with a duck caller made by a clan who thinks that my sexual actions are similar to that of an individual having sex with an animal. 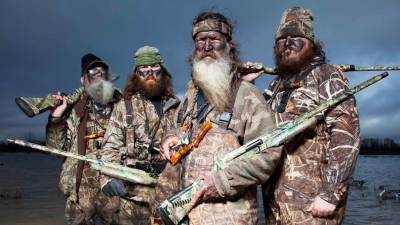 Call me simplistic or call me a reductionist, but whether or not you call someone a faggot to their face or behind their back doesn’t make you any less homophobic.  Using hegemonic biblical texts that no longer define or reflect the views of many individuals from all walks of life fighting for gay and lesbian rights and emphasizing the correct usage of genitalia that deduce a minority class of citizens down to nothing more than whom they decide to love is homophobia plain and simple.

Just like radical feminists in the 1970s who no longer stood by as patriarchal forces took away their personal, political, bodily, and social autonomy to the ways that African American refused to be silent about how they had (and have continued to be treated) by racists, homosexual, lesbian, bisexual, transgender, queer, intersex, and asexual men and women can no longer remain still in the face of targeted hateful attacks upon our communities. Until religion, politics, and society treat LGBTQIA people as equals no one is safe and until people are held accountable, both publicly and privately, for their actions and statements, this world will never change.

I recently tweeted that: “If it walks like a duck and quacks like a duck, it’s most likely a duck; and in this case, its most likely a family full of homophobes hiding behind a statement that lies near the condemnation of shellfish.”  I stand behind this statement and I stand behind the millions of LGBTQIA people who know more about G-d’s love than a man and family who claim to be deeply religious. 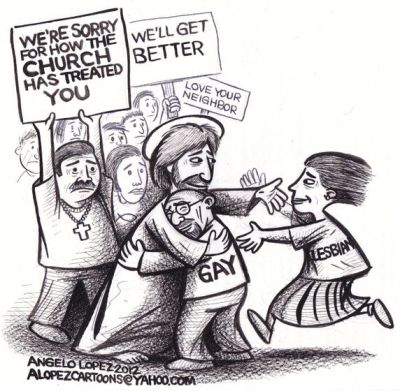 Although I find it difficult to understand at times, I respect the position of those individuals and groups that frequently contribute to this blog who choose to remain in these types of traditions and fix the various problems equal rights activists must overcome from the inside.  I am clearly not from this camp and although I claim no religious identity, I do respect their call to action to make a difference in many of the conservative religious and faith-based communities I may and may not have mentioned above.  From the fight for women’s rights to the inclusion of LGBTQIA people in religious communities, the fight for equality, in my opinion, needs a flare of the radical.  Historically, I would call this the Alice Paul vs. Carrie Chapman Catt debacle – while some individuals choose to cozy up to those individuals in power and work for change from the inside out there are those who will literally starve themselves to death just for the ability to taste freedom.  Both are valid and worthy of respect but what one, at the end of the day, will achieve the equality we all so crave?

If the Duck Dynasty debacle has taught us anything, it isn’t that we live in a country where people like Phil Robertson (and many others) have the ability to say whatever they want by hiding behind the Bible, but rather the fact that there are millions of people who only wish to have the same inalienable rights as he does and which he takes for granted.  To be able to walk down the street holding the hand of the one you love is a great feeling and an action that some of us aren’t able to perform without fear.

John Erickson is a Doctoral Student in American Religious History at Claremont Graduate University. His research interests involve an interdisciplinary approach and are influenced by his time as working at a women’s center and active member in the LGBTQ and women’s rights movements. His work is inspired by the intersectionality of feminism, queer identity, religious, political and cultural rhetoric, and American Religious History. He is the author of several articles dealing with Feminism, Eco-Feminism, and Queer Theory and Identity. Alongside his academic interests John is also a published poet and can be followed on Twitter at @jerickson85.

Like Loading...
‹ Of Birds, Angels, and Tidings of Great Joy by Carol P. Christ
Blessed is the Womb By Dawn DiPrince ›