Home › Ancestors › In Search of Ancestral Wisdom by Max Dashu

In Search of Ancestral Wisdom by Max Dashu 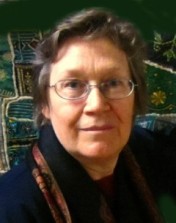 In a world in extremity, we are searching for the wellspring, the inexhaustible Source known to all our ancient kindreds. Many of us have been cut off from our deep roots, and especially from the ancient wisdom of women, and female spiritual leadership.

My long quest has been to discover the lost strands of my own roots, the old ethnic cultures of Europe, and to reweave those ripped webs. I have spent decades searching for authentic cultural testimony about women’s spiritual ways before Christianity, before the Roman empire, before men commandeered all positions of religious leadership. My book, Witches and Pagans: Women in European Folk Religion, brings together these ripped strands of the cultural web.

In the beginning I thought: they’ve destroyed everything, we will have to rebuild from scratch. But I began to find treasures in archaeology, folk orature, and medieval Irish and Norse literature. In the Icelandic Edda, I found the Völuspá – “Prophecy of the Seeress,” where the völva says, “The fates I fathom, see far and wide the worlds around.” Her prophesy repeats the ritual phrase, “Know ye further, or how?” 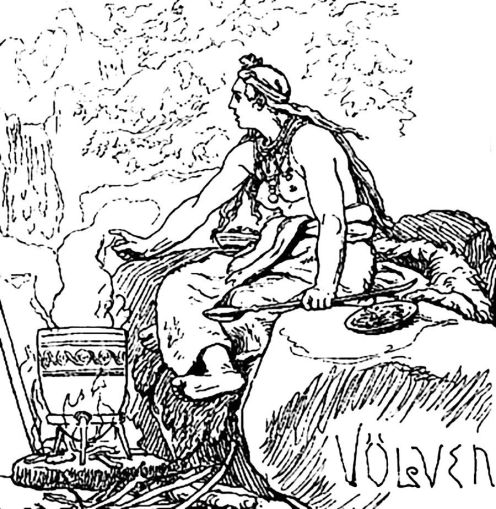 Völven, by 19th century Danish artist Lorenz Frølich. Note her distaff-shaped seidstafr, dozens of which have been found in Scandinavian women’s burials around 800-1000.

I also found the Norse practice of utiseta, “sitting out at night for the sake of evoking spirits, or for the sake of gaining knowledge.” They would “sit out” on the land as dreamers: gazing, listening, gathering wisdom. In Old High German this was called hliodarsaza, “hearing-sitting.” You could call it heathen Zen.

I found Old English gnomic proverbs that philosophize about Fate as goddess. They say, “Wyrd is mightiest.” They speak of “What Wyrd wove for me,” and of “time woven on Wyrd’s loom (wyrdstæf). Lithuanians also described the goddess Laima as a spinner and weaver of destiny.

I discovered that the witch’s wand had a historical basis, in the northern German wickerode and the völr or sei∂stafr, ceremonial staff of the Norse seeresses. Scattered mentions refer to dream-readers, sooth-sayers, and herb-chanters, fire-gazers in Switzerland, or water-gazers in France and Spain. A thousand years ago, Anglo-Saxon women were described as going out in the night to hold dialogues with the spirit of a fountain, “asking questions and waiting for answers.”

The priesthood forbade all this, and used confessional manuals to interrogate people about heathen observances. Some would ask, “Is there any woman who… ?” Around 1015, a German bishop demanded to know, “Have you done as some women do, at certain times of the year, spread a table with meat and drink and three knives, so that if those Three Sisters come… they can regale themselves?” These women were making offerings to the Fates.

The same bishop asked, “Hast thou come to any other place to pray other than a church or other religious place which thy bishop or priest showed thee: to springs or stones or trees or crossroads, and there in reverence for the place lighted a candle or torch, or carried there bread or any offerings, or eaten there, or sought there any healing of body or mind?” This is the ancestral wisdom! What people does not share this heritage of going to the land for healing, to the waters for vision? Of lighting fires and making offerings? But an authoritarian mindset demanded that spiritual practices be policed by an all-male priesthood.

The priests fought a long battle—never entirely successful—to stamp out ancestor veneration. The Dutch came to consult their witte wieven, “wise women” spirits of the grave mounds. In late 8th century France, people went for healing to “old monuments, that is, the ancient Sarandas [probably megaliths] which they likewise call the Greater Ones.” So says the Sermon on Sacrileges, which is what priestcraft called our sacraments: sacrilege, blasphemy, devil-worship. 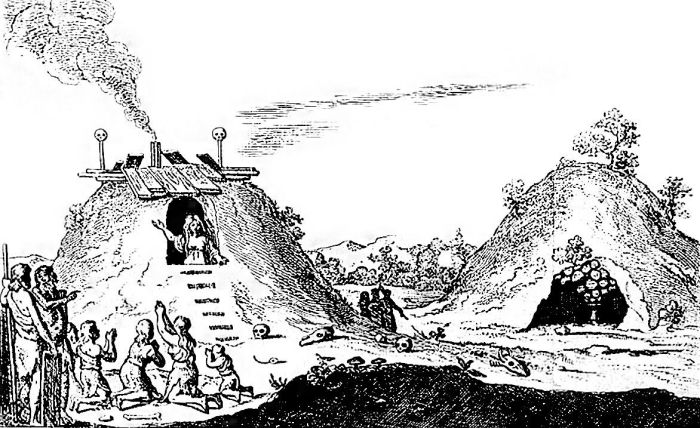 Witte Wieven in Gravemounds, by Gerrit van Goedesbergh, 1660. The ancestral woman emerges from the mound to prophesy and heal.

Germans observed wakes “surrounded by pagan rituals,” burning grain for the dead, clapping carding combs over them, and sprinkling water under the bier as it was carried out. Irish women preserved the caíone, keening praise-songs over the dead who were laid out at the wake—a custom priests were still fighting to stamp out a century ago.

Britons had tree weirding and well-weirding, when weorðung meant “reverence.” The Irish knew the spiritual arts of imbas forosnai, “the wisdom that illuminates,” and teinm laida, the “heat of song.” And we also had dichetal de chennaib, “chanting from the bones”—from the core of the being.

So we rediscover the crone’s wisdom of the Dísir, the Cailleach, and la Vieille qui court par le temps (“who travels through time / the seasons”). We learn of Berthe, who proverbially spun at the beginning of time, and is also called the Swanfoot Queen and Mother Goose. We savor stories of the Miracle of the Bones, as the Goddess brings back to life the cattle that the witches had feasted on with a touch of her wand.

This Goddess of the Witches is attested in the orature of many countries. The priests inveighed against Diana, “the goddess of the pagans,” also called “the witch Holda.” This single mention ties in with Holle and Perchta and a broad swath of goddesses that women honored in their spinning and weaving, in rites of birth and death, and in the natural sanctuaries of lakes and caves and peaks.

It was these folk goddesses who were demonized in priestly denunciations of “devil-worship.” This ideology wrought havoc in the European witch hunts and, later, in the European conquest of the world. The diabolist framework is responsible for an unprecedented record of culture-destruction, the suppression of ancient wisdom ways of many peoples. But diving under that ideology, we can still find traces of the old ways.

Once we access the deep reservoir of European heritages, even if it is just a few sips, their connections to cultures in other parts of the world are revealed. For example, we find sweat-houses in Ireland, Russia, Finland, and Portugal. Over and over, we find incantation and smudging with herbs and medicine bags. These connections are shared truths, and recovering them is part of reweaving the world.

Max Dashu is the author of Witches and Pagans: Women in European Folk Religion, an ethnohistorical sourcebook just published by Veleda Press. She founded the Suppressed Histories Archives in 1970, and is known for her visual talks on global women’s history. Her two videos are Woman Shaman: the Ancients (2013) and Women’s Power in Global Perspective (2008).

Like Loading...
‹ A Maternal Perspective Towards the Body by Lache S.
Continued Adventures in Somatic Spirituality: Navel-Gazing by Kate Brunner ›