Home › Film › It is Over, It is Just Beginning by Kate Brunner

It is Over, It is Just Beginning by Kate Brunner

“In this nation of thinkers and philosophers, poets and artists, idealists and enthusiasts, the world will recognize nothing but a people of conquerors and destroyers. …we are neither loved nor respected, but only feared. We are deemed capable of every wickedness, and the distrust felt for us grows ever more pronounced….”

These are the private musings of German prince, Friedrich Wilhelm Nikolaus Karl, — Friedrich III (or apparently “Fritz” to his friends) — on the disturbing nature of the Second Reich under his father, Wilhelm I & the “Iron Chancellor”, Otto von Bismarck. Friedrich wrote these words in his diary roughly a century and a half ago.

It is somewhat disheartening and downright eerie how the words of history echo so familiarly into the present moment sometimes. My children & I read this primary source excerpt together during our homeschooling studies last week and it struck me in the heart.

This week, I began writing my monthly piece in the days leading up to Election Day 2016; a piece that would publish shortly after my state and my nation made a slew of very crucial decisions about our future as a people.

When I thought about those decisions, I didn’t actually mean the official returns.

Yes, I knew we’d elect a President, a new variety of Representatives and Senators, some Governors, and an assortment state-level officials. We’d answer the fate of ballot initiatives, state constitution amendment questions, and bond referendums. But more important to me was and is the question of what would happen and is now happening in our hearts, minds, and communities now that the returns are in.

The most tumultuous election cycle of my lifetime will be over when you read this. It will finally be over. But life post-Election Day 2016 is just beginning.

I didn’t know how I would feel until it happened. And now I do. I am heart-broken, sorrow-filled, and angry. Very, very angry.

As they often do during times of personal turmoil, I find my thoughts turning towards stories that help me process. Sometimes, those stories are ancient — mythology from thousand year old cultures — and sometimes the stories that guide me are drawn from our modern bardic repertoire know as television & film. As a self-proclaimed Whedonite and a wannabe Scooby, sometimes I ask myself WWBD? — “What would Buffy do?”

In the sixth season of Buffy the Vampire Slayer, Joss Whedon and the show’s cast & crew put together a musical episode that was later nominated for an Emmy and even involved in subsequent Emmy ballot drama. So, the show is no stranger to election politics of a sort. The musical episode, “Once More With Feeling”, contained the major emotional pivot point of the sixth season, when all the things Buffy Summers and her friends have been keeping from each other are revealed in song and dance. By the end of the show, everyone knows everyone else’s secrets; big, little, dirty, or clean. Everyone is revealed for who they are in the moment. Not unlike what we’ve experienced over the last couple years in our American electoral politics – our country is revealed for who we are in this moment.

In the final musical number of the episode, the entire cast stands at a loss. It’s over. Everything is out in the open. And they find themselves singing, “Where do we go from here?” It’s all over. And yet, it’s just beginning.

I am trying to look past the hard results of this election, past who won and lost, who will be sworn in to which offices, and in these scary, challenging moments, I find myself singing the same refrain. Where do we go from here?

We’ve done an incredible job of convincing the world and ourselves that we are “nothing but a people of conquerors and destroyers” who should be “neither loved nor respected, but only feared.” and “deemed capable of every wickedness”. So where, indeed, do we go from here?

The election is over. Life after Election Day 2016 is just beginning. We still wake up and live through our days. We still have families and friends and strangers to care for. We still have obligations to fulfill, prayers to make, meals to share, jobs to do.

“Why is the path unclear
When we know home is near?
Understand we’ll go hand in hand
But we’ll walk alone in fear
Tell me!
Where do we go from here?“

I am going to try to start by remembering we are still a “nation of thinkers and philosophers, poets and artists, idealists and enthusiasts” and begin again to live into that. I am going to try to reject continuing to “walk alone in fear“. As hard and as scary as the prospect is, I will try to love, hope, create, serve, breathe, stretch, help, pray, dance, sing, think, grow, and walk together in remembrance of the best, most beautiful, most compassionate teachings of humanity’s myriad faith traditions. This is where I hope I can eventually get myself to, even with all of today’s sorrow and rage.

The election is over. Thank God/dess. Many of us are left questioning whether or not we are still the home of the free any longer. But what I do not question is that we are still the land of the brave. What we do with this ending, this beginning is entirely up to us.

So, maybe a better question to ask myself than WWBD? is WWYD? What will you do? Where do we go from here?

ETA: Today, I’ve decided that I am going to start small and take a page from the post-Brexit #safetypin & Australian #illridewithyou campaigns. For the foreseeable future, I’ll be wearing a single suffragette “pearl” on a safety pin, fastened over my heart to let anyone who crosses my path know I am a safe person to ask for help should they ever feel unsafe or threatened in my country. And notice I said anyone — I mean it too. ALL of my fellow Americans. Even the ones who would seek to strip me of rights and protections. As challenging as it may be, the service my faith demands of me does not discriminate. So does the call of the Slayer, for that matter. WWBD? I’ll let her answer that for herself:

“From now on, every girl in the world who might be a Slayer, will be a Slayer. Every girl who could have the power, will have the power. Can stand up, will stand up. Slayers, every one of us. Make your choice. Are you ready to be strong?” 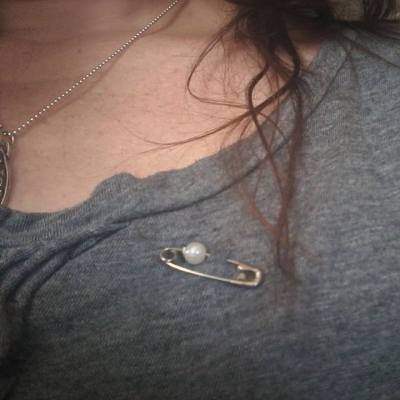 Kate M. Brunner is a writer, healer, ritualist, & member of The Sisterhood of Avalon, studying at the Avalonian Thealogical Seminary. She is a resident of Heartwood Cohousing in Bayfield, Colorado & a homeschooling mother of three. She holds a BA from Tulane University, where she studied Economics, International Relations, & Religious Traditions. Kate hosts seasonal women’s gatherings, priestesses labyrinth rituals, and facilitates workshops on an assortment of women’s spirituality topics. During 2017, she will present at the SOA’s annual online conference, AvaCon, & at the second annual Ninefold Festival in Colorado. She is also published in Flower Face: A Devotional Anthology in Honor of Blodeuwedd and The Goddess in America: The Divine Feminine in Cultural Context.

Like Loading...
‹ My Reaction to the Election Results by Elise M. Edwards
Painting Our Lady of Light: Winter Holidays 2016 by Angela Yarber ›