Home › Activism › The Bird No Longer Perches by Esther Nelson

The Bird No Longer Perches by Esther Nelson 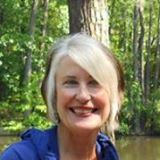 Except for a couple of Dr. Phil shows, I have not watched TV since last November’s presidential election. I don’t want to be assaulted by the images of men (and a few women) occupying positions of power and leadership in the United States. I’m still outraged that so many inept, mean people are at the helm, being led, at least symbolically, by the “tweeter-in-chief.” I struggled for weeks after the election to achieve some balance. I cried. I raged. I signed petitions. I marched in protest. After the frenzy of all that physical and emotional activity, I have calmed down.

I’ve accepted the inevitable (and unnecessary) suffering—animals, humans, the Earth—that the new administration appears inured to and hell bent on continuing. I’m not hopeful things will improve.

The dictionary defines “hope” thusly: “to cherish a desire with anticipation:  to want something to happen or be true.” I don’t anticipate my desire for a more just society to happen in spite of my wanting that to be the case. Nevertheless, I refuse to live passively. I continue to rage, sign petitions, and march in protest.

When Emily Dickinson, American poet (1830-1886), died, she left behind hundreds of poems in her desk drawers. Wanting to help me cope with my sadness and angst over our current political situation in this country as well as the desperate state of affairs worldwide, a friend of mine encouraged me to read and “mull over” the poem below: 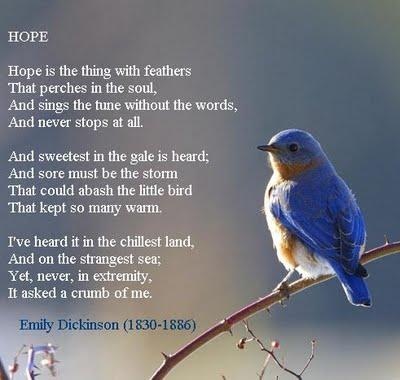 I read the poem several times. Although cleverly written, I took no comfort from it. The narrator seems to be saying that hope is a “given”—always there—perched like a bird in our soul. We don’t even have to sustain “the thing with feathers” since it asks for nary a crumb. It’s possible, though, for a “sore storm” to destroy “the little bird” although that would take some doing. I feel as though that “sore storm” swept right through my world when we elected a blatantly racist, sexist, anti-intellectual, volatile, thin-skinned, and xenophobic president. That act, along with all its ramifications, destroyed the thing with feathers perched in my soul.

Earlier this week, Bryan Stevenson, author of Just Mercy, came to Virginia Commonwealth University to talk about his work with the Equal Justice Initiative, a legal practice he founded in Montgomery, Alabama, to help people on death row obtain justice—one of the many services the organization provides.

Bryan suggested four steps “for those who want to change the world.” The first: “Get proximate to people and their problems.” This enables us to see the details and nuances of the particularities of people’s lives. “There is power in proximity.” Second: “Change narratives that sustain inequality and injustice.” By using a narrative that calls some (usually black or brown) children “super-predators,” we make it acceptable to throw some children away. The fourth step (I’ll get to the third): “Be willing to do uncomfortable things.” For example, Bryan had to tell (and attempt to comfort) a mentally-challenged client that his execution would go forward. Bryan’s third step, especially appropriate to this essay: “Stay hopeful.” “Hopelessness,” Bryan said, “is the enemy of justice.” “Hope,” he added, “is your power.”

Bryan admits his work can be discouraging. Innocent people are often denied justice. “Our system is broken.” So, why does he continue forward? “Because I’m broken too and within that brokenness, I find redemption.”

I admire and laud Bryan’s work. I don’t understand how that bird perched in his soul has not been crushed. How does he remain hopeful in spite of racist (and sometimes predatory) law enforcement officers carrying out blatant injustices within our broken system day in and day out? He didn’t say. Just told us to remain hopeful.

My good friend, Dale Smith, identifies as Christian. He worships and is active in one of the Episcopal churches in town. He’s discouraged with the flagrant display of injustice both in our country and throughout the world. He’s marched in protest. He also has his government representatives on “speed dial” so he can easily call them every day to make sure they hear his point of view. On Good Friday, the day before he traveled to Washington DC to take part in a protest march yet again, he sent me the following message:

The atonement language in the liturgy does nothing for me, but the idea of Jesus being willing to die for the Kingdom of God does. The world has changed so little since the first century, really—at least not in important ways. Power structures remain and continue to hold onto power and do their damage.

Dale understands the core of Jesus’ message to be a subversive one. “[M]any who are first will be last, and the last will be first.” (Matthew 19:30) Unfortunately, the subversive message of prophets often gets co-opted by the dominant power structures and the subverted message, instead of liberating, becomes oppressive, upholding the status quo.

These days, I cope with the political landscape by accepting the inevitability of disaster. I don’t ruminate over it. What I do is focus on the here and now. What needs to be done right in front of me and right at this time within my particular space? So, I teach students. I read books. I collaborate with and spend time in lively conversation with my colleagues and friends. I care for members of my extended family. I tend to those mundane chores we call “activities of daily living” and travel when possible.

In spite of my rather dark worldview, I do experience a degree of personal peace—even joy. However, I am convinced the broken system which we all inhabit has become irreparable. As my friend, Dale, so aptly put it, “Power structures remain and continue to hold onto power and do their damage.”

So sore have been the recent storms, the little bird perched in my soul has been abashed.

Like Loading...
‹ Moonlight Reflections by Elise M. Edwards
Painting Our Lady of Sorrows: Mother’s Day and Resurrection by Angela Yarber ›