For those of us living in Southern California, it has been a tense week to say the least: flames ravaging up and down the coast, homes lost, thousands displaced, freeway and school closures, smoke thick in the air, and ash raining from the sky.

And the fires are still raging.

Whether or not one is directly impacted by the wildfires here in Ventura and Los Angeles County, you can’t walk through the grocery store, turn on the radio, or get a cup of coffee without engaging the fear and concern, or hearing about the devastation left behind. We are sharing a trauma, howbeit differently, and with different levels of need.

I have been lucky during the fires.  I live just south of Ventura. My work is on the Getty side of the 405: it was threatened, but not in flames.  I spent the week checking in with family and friends, offering my home, and breathing the toxic air. I also made dinner, picked my brother up from the airport, attended a baby shower, and graded papers. … This is a strange juxtaposition, and like many Californians, I have had a hard time processing what’s going on.

On Sunday afternoon, surrounded by the unnatural darkness of an ash filled sky while traveling down the 101 freeway, I wrote the following. This is my effort to make sense.  And I offer it to you all here, in case this helps you make sense too.

The Earth’s sun covered in wildfire smoke turns a kryptonian red, and I put my glasses back on- the opposite of Superman- my disguise complete with tortoise shell glasses.
I’m grading papers, exams, journals. A school stands empty across the pass from a field of flame.
What is my superpower again? It might not make a difference.

If I were filming a movie about the apocalypse, I would shoot today- no need for special effects. The sky is brown, and the stale winter yellow dotted with dark green that usually covers the California coastline is thinly powdered with grey. That is, unless it is black. The charcoal left behind. Short little cactus bushes, now withered, green weeping into dead brown, stubbornly cling to life- like our heroes, or whoever’s starring in this film. Human survival belying the surrounding devastation. (Just like in real life.)

“This is the new normal,” they say. In other words: get used to it. But isn’t it odd that we feel our planet scream in the inaccessibility of the mundane? Or in its midst? I can’t get to work today- or all week. I cancelled my finals. I put my finals online. I have to pick up my daughter from grandma’s house, and everyone else whose driving is wearing a breathing mask. Maybe I should pick up a breathing mask? But the store is out of them- and here I have spent all of this time driving and walking around outside with no mask. Grandma was supposed to go out, but the party was canceled because the host’s house burnt down. Firefighters pull a Christmas tree from a burning home. I strap my daughter into the car seat while ash is falling from the sky.

It’s three pm; and I know I am safe, though I’m driving into the black-brown again.

I sit at my desk, safe in my home. We moved out of Ventura last year. I adjust my glasses. I know a little too much about religion not to wonder if some people are stirred by the fires in the City of Angels. In fact, I don’t really wonder- I know this is true. But prophesy is an interesting excuse for irresponsibility. A hope for a second coming, a sad reason to hasten the end of the world.

I say to myself, coming home from work, “in the movies, this is when Superman comes.” But Superman didn’t save Krypton. Trying not to stare into our planet’s red sun, I think to myself: maybe we’ll be like Krypton one day.

And fire can burn it all away.

A friend, and near neighbor to our old apartment in Ventura, took this photo last Week from his street corner. 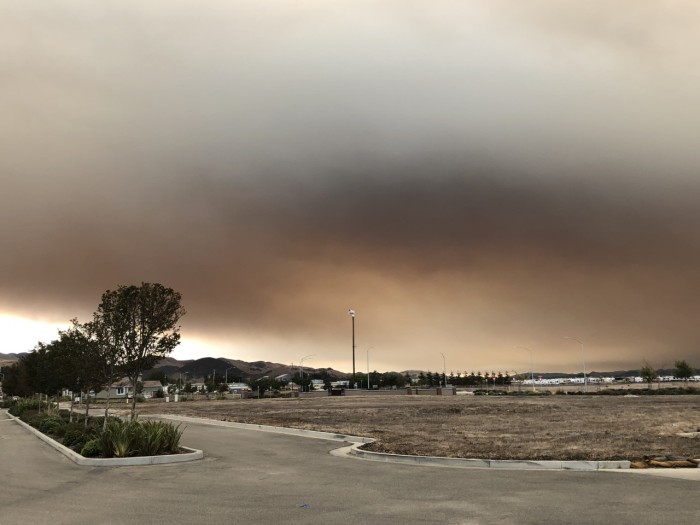 Sunday morning. Smoke in the air in San Luis Obispo. 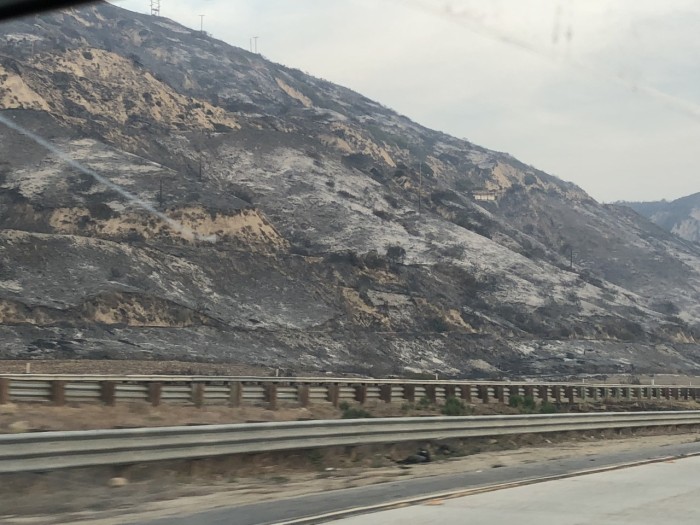 The 101 Freeway, just north of Ventura.

Sara Frykenberg, Ph.D.: Graduate of the Women’s Studies in Religion program at Claremont Graduate University, Sara’s research considers the way in which process feminist theo/alogies reveal a kind transitory violence present in the liminal space between abusive paradigms and new non-abusive creations: a counter-necessary violence. In addition to her feminist, theo/alogical and pedagogical pursuits, Sara is also an avid fan of science fiction and fantasy literature, and a level one Kundalini yoga teacher.

Like Loading...
‹ A Winter Woman by Molly Remer
Religious Studies is Too [?] for Education by Lache S. ›