Like many in the FAR community, I participated in the world-wide 2017 Women’s March.  So did Madge, the bodacious cartoon character who took me by surprise in 1990 and went on to become the narrative character of The Maeve Chronicles. Her life in print, as the first century Celtic Magdalen, satisfied her until….November 8th, 2016 when Madge returned, mouthy as ever, to rejoin us in our own times.

On the first anniversary of the historic march, I’d like to share a little of Madge’s millennia-spanning story and a few images from her two books of cartoons, now published in one volume.

Madge first appeared to me in 1990 as a line drawing of an ample woman sitting naked at a kitchen table drinking coffee. I had recently finished writing a novel, The Return of the Goddess, A Divine Comedy, and felt I had nothing more to say. I decided to play with magic markers for a while. Madge, as the naked woman introduced herself, was far from done with words. Fleshed out with peach magic marker, Madge told me she wanted “fiery neon orange” for her hair color. She also required speech balloons for her theological queries. (For example: If we are all members of the body of Christ, who is the twelve-year molar, the kneecap, the colon?) Enchanted with her sass, I invited her to be in my next novel. I pitched ideas to her. She rejected them all as too dull and said, “I want my own book of cartoons first.”

As I listened to the Congressional hearings for the First Gulf War (back in the days when such debate was taken more seriously) The Book of Madge (Her Book) began to evolve. Turns out, Madge was a painter, a prostitute (hard to make a living in the arts) and a peace activist, founder of TWAT (Tarts With Attitude Triumph) POWER (Prostitutes Opposing War Everywhere Rise) and WITCH (Women Inclined to Create Havoc). Her rich political fantasy life included an address to Congress. 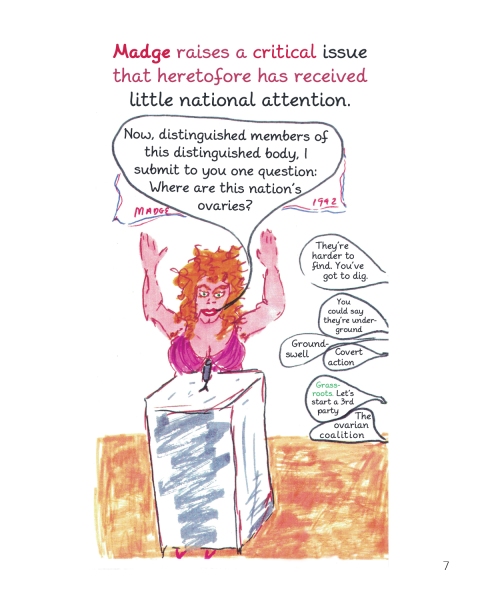 When war was declared, Madge and her friends took to the streets. 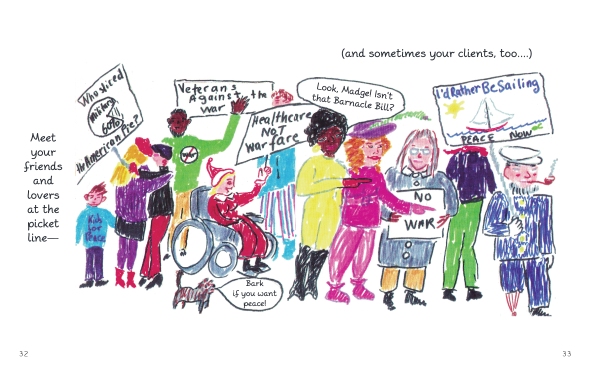 The book, which became a serious-comic peace witness, includes some choice images which cannot be reproduced here. For example, the first George Bush was fond of saying “read my lips.” Madge put a whole new spin on that phrase. The Madgic Oracle/orifice made regular political commentary. She also began a series of paintings entitled “Penises for Peace” and invented the whole-body-no-holds-barred school of art.

The pages in her book ran out as the First Gulf War came to what seemed at the time like an end. Madge decided starring as Maeve, the Celtic Magdalen born on the Isle of Women, was sufficiently outrageous to her. We spent the next twenty years writing The Maeve Chronicles. The Book of Madge stayed on the shelf, dusted off now and then for friends, until the aforementioned date.

In her sequel, Madge Returns, Madge sports some wrinkles and now requires five different markers for her hair, but remains very much herself. She and Australia (in yellow above to her right) are still best friends, semi-retired from the oldest profession and full of entrepreneurial spirit. They invent “Pussy Guard” in three distinctive models: snapping turtle, toucan, and classic tabby claws. They are also still activists and travel to Standing Rock. And of course, they go to the Women’s March. 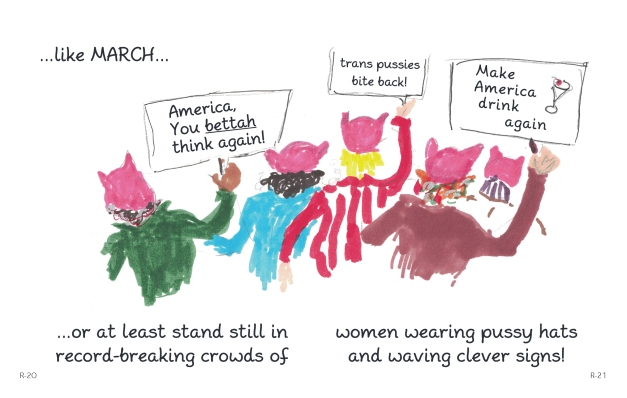 Not only are Madge and I older, but times have changed. We created The Book of Madge in six weeks, our focus being the protest of one war. With Madge Returns we worked at a breakneck pace for six months, hurriedly sketching in pencil and later adding marker. As we all know, so much was and is happening so fast, on so many fronts. The drawings reflect the rush to keep up. 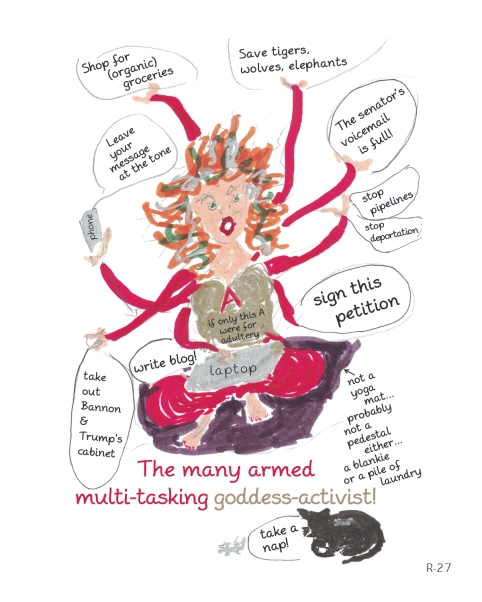 Though I continue to do my part as a citizen, (petitions, calls, demonstrations etc..) in the spring, Madge and I put away the markers and returned to the garden, literally. Her comic spirit is always with me, giving me the courage and the laughs to go on. I’ll close with one of my favorite images from Madge Returns, drawn during Native Nations Rise, Indigenous Peoples and Allies March on Washington. 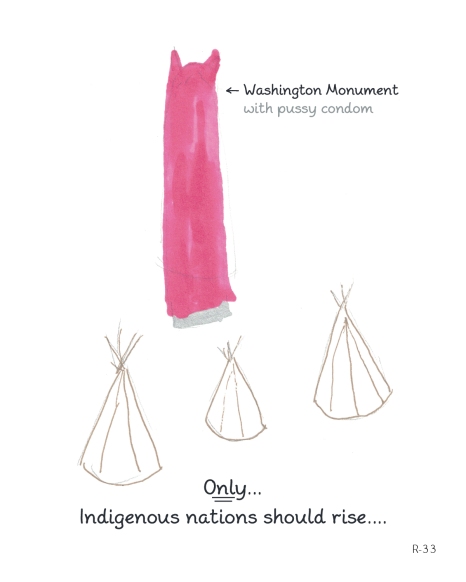 Happy Anniversary, Women’s March! Many happy returns of the day!

Elizabeth Cunningham is best known as the author of The Maeve Chronicles, a series of award-winning novels featuring a feisty Celtic Magdalen. She has recently released the 25th anniversary edition of The Return of the Goddess, A Divine Comedy. Her graphic novels The Book of Madge and Madge Returns, having sold out as a signed limited edition, are now available in one volume from online purveyors. She is also the author of three collections of poems as well as the classic cozy mystery novel Murder at the Rummage Sale. She is at work on a sequel. A fellow emeritus of Black Earth Institute, she lives in New York State’s Hudson Valley.

Like Loading...
‹ #MeToo and the Idolatry Trap by Tallessyn Zawn Grenfell-Lee
The Beauty Way by Carol P. Christ ›