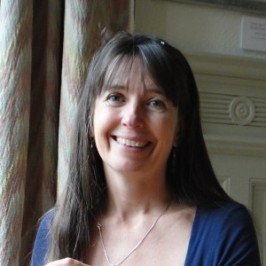 Summer is here, and even with the terrible troubles going on in our world, I hope that some of us are managing to take time out and enjoy pleasant evenings outside under the stars. Gazing up at the heavens, we see the same starscape our ancestors saw, thousands of years ago.

In the worldwide Sacred Circle Dance network of which I am part, many dances have been created or choreographed which work with the energies of the sun and the moon. The power these heavenly bodies have in the human world is obvious, but many people do not realise the importance which the stars and planets also had to ceremonial practice in the ancient world. The architecture of Greek temples in antiquity was oriented to the rising of specific constellations and other astronomical phenomena, which also alerted people in far-off locations that the time was drawing near for celebrations or ceremonies in particular places.

The concept of ‘right timing’ was therefore essential to ancient Greek ritual practices, and remains important today. Ritual dance or any other ceremony still aims to bring about the experience of beauty and goodness which is summed up in the Greek word oraía (ωραία), from óra (ώρα), hour or season. The original meaning of oraía, ‘good’, was ‘timely’ or ‘ripe’, occurring ‘at the proper moment’ and therefore in the proper way.

According to one theory, the word óra or hóra is also linked to the name of the Goddess Hera, one of the most revered of the Greek Goddesses. Queen of Heaven, Queen of the Gods, Hera was considered the ‘origin of all things’.(1) The first monumental Greek temples were dedicated to her (2), and pilgrims came to her worship from Armenia, Babylon, Iran, Assyria, Egypt and the rest of the ancient world. Along with Demeter and Athena, Hera has many characteristics of pre-Hellenic Great Goddesses. She is associated with women and childbirth, home and family, as well as healing herbs and flowers.

According to archaeologist Marija Gimbutas, Hera is descended from the prehistoric Snake Goddess, and shares with the Egyptian Goddess Hathor the attributes of serpent as well as cow. Ancient Greeks believed that the Milky Way was created by drops of milk from Hera’s breast, so that the night sky itself cast the protective mantle of Hera’s divine maternal influence over those who stood on earth under the stars. This would have been especially apparent to worshipers at the Heraion temple on Samos, which had 155 columns but no roof, so that it was open to the heavens.

For the ancient Greeks who built these temples, ritual was a way to maintain cosmic order, and to link the human world with the divine.(3) The universe was seen as a circle; round dances were thus a mirror of the cosmos, and formed a central part of rites at Delphi, Knossos, Eleusis and other sacred sites.(4) Altars stood in front of the temples under the open sky, with space around them which may also have been used for dancing. In the same way, every Greek Orthodox church  – many of which were built on the foundations of earlier temples – has a dance place in front of it, where the priest and priest’s wife still lead the ritual dance on joyful occasions such as weddings (including mine). 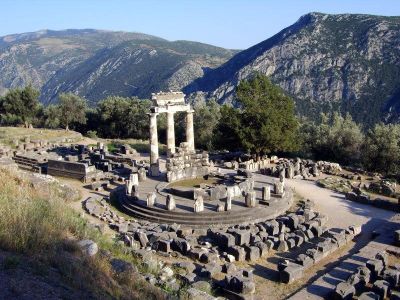 Round spaces in temples facilitated round dance rituals, for instance at the Tholos of Athena at Delphi, or around the Well of the Beautiful Dancers at Eleusis. Not every region had such a grand temple to dance in, and in any case the temples were destroyed under the Roman emperor Theodosius in the 4th century CE. However, every village had, and still has, one or more alónia, circular threshing grounds sacred to Demeter, Goddess of grain. These provided ideal venues for ritual dances and are still used for such in many remote places, for instance in the villages of Pieria on the slopes of Mount Olympos.(5) 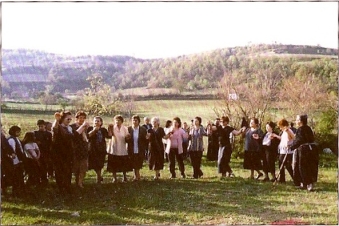 As scholar of Sacred Dance Maria-Gabriele Wosien tells us, dance ritual is an ‘affirmation of creation.’(6) Ritual dance served to celebrate the sacred cycle of life and human participation in it. Marija Gimbutas has shown that an emphasis on cosmological wholeness and unity of being was fundamental to the Old European Neolithic worldview. This ancient culture, in which today’s circle dances very likely have their origin, saw the individual not as the centre of the universe (as modern philosophy has it) but as an inseparable part of the great cosmic whole. Gimbutas identified an entire symbolic language in Neolithic archaeological finds, featuring elements of the cosmos such as the circle, star, sun, moon, spiral, and zigzag. (7)

Throughout the Balkans and the Near East, and particularly in Greece, vestiges of the ancient cosmic dance can be found.  As in Pieria, people still dance in sacred places at appropriate sacred times, and the cosmic signs and symbols of Neolithic art still feature in the woven and embroidered motifs of traditional folk costumes worn for ritual dancing. 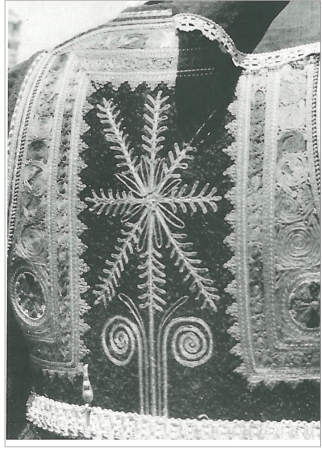 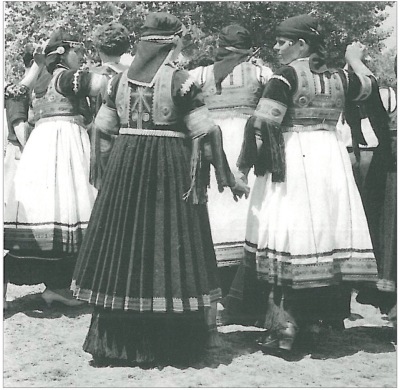 These highly elaborate folk costumes invariably involve a headdress, sometimes very elaborate, which resemble crowns or incorporate flowers in another link to early depictions of Goddesses, including Hera. I believe these costumes are remnants of an ancient tradition of ceremonial adornment which sought to align the human and the cosmic realms. I will explore this connection further, beginning with a discussion of the word cosmos, in Part Two of this article.

Like Loading...
‹ To Dread and To Savor: Mothering in Real Time by Marcia Mount Shoop
On a Friend’s Departure by Vanessa Rivera de la Fuente ›