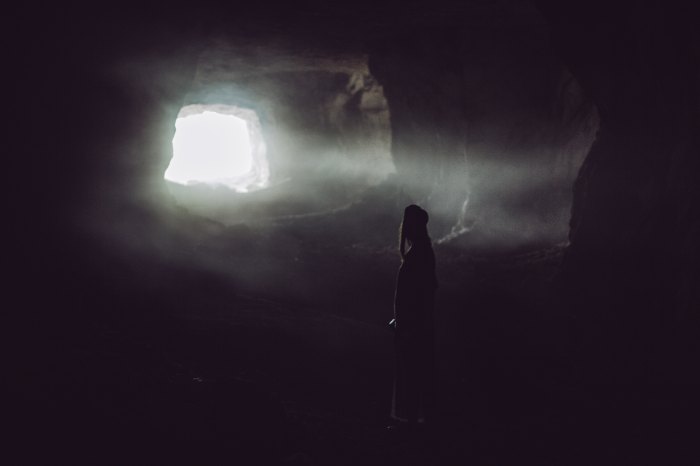 As I finalize my manuscript for Women Rise Up, to be published with the FAR press in early 2019, I want to share this excerpt from my chapter on Mary Magdalene.

The Spirit of God moves at unexpected times and places. When I spot a single red bloom among the barren trees in wintertime. When I watch my daughter takes a bite out of sun-ripened strawberry. When something catches me off guard and pulls my full attention to the present moment. These breath-taking moments illuminate the presence of Spirit at work.

One frigid Saturday morning I took the two-hour train ride from New Haven, Connecticut where I was living at the time to New York City for the day. I’d been invited to join a gathering of advocates working to end gender-based violence. Around a hundred of us made our way to an upper-floor classroom at The New School in Greenwich Village. When we entered the room, most of us were strangers, but in a matter of hours, we managed to form a sacred community of survivors. We took turns sharing our own pain-filled  stories of violence, betrayal, survival, and hope. Both gut-wrenching and healing, the act of naming our collective suffering fused us together: our cacophony of individual experiences blended into a unified chorus for justice. What once was hidden had now come into the light.

As we were preparing to leave, the song “Walking on Broken Glass” by Annie Lennox filled the room. Without hesitation or prompting, we all began to dance. I distinctly remember thinking, I don’t care what I look like. I don’t care what anyone thinks. I want to dance! I felt free, uninhibited. For the first time I understood the meaning of “You have turned my wailing into dancing”  (Ps 30:11).

I couldn’t tell you how long we danced in that room. It felt like forever — and like a moment. But I remember thinking, I never want to leave this place. I longed to soak in that newfound feeling of joyous freedom. Eventually the music died down. It was time for me to catch my train back home. As I walked the twenty blocks back to Grand Central Station, I couldn’t quite wrap my mind around what had happened in that room, but I knew that I’d had an unexpected encounter with God and that I would never be the same.

When I think about biblical moments of divine surprise,  Mary Magdalene’s appearance at Jesus’s tomb immediately comes to mind.

The morning when Mary Magdalene comes to the place where Jesus has been laid to rest, the early light of the sun has yet to break. The world, having returned to its normal rhythms, is still heavy with darkness. But she cannot sleep, not with the harrowing images of his death haunting her dreams. She makes her way alone through the darkness to her friend’s tomb where she will present her humble offering of unencumbered grief. There she will give in to the waves of mourning as they crash over her again and again.

Her plans to grieve in the solitude of night are thwarted by a stunning discovery: the stone that had been placed in front of Jesus’s place of burial is no longer there. She seeks the help of some of the disciples who confirm what she most fears: the body is gone.

Mary feels compelled to enter the empty tomb herself.  As she peers inside the lightless space, she encounters two angels standing by Jesus’s burial garment. But then a voice calls to her from outside the dark tomb:  “Woman, why are you weeping?” She peers outside, her eyes unable to make out the figure shrouded by the darkness. It must be the gardener. But then he speaks her name. With the utterance of a single word the impossible has been made possible. Jesus is not dead. He is here. He is alive. He knows her name.

Only a handful days have passed since her heart was ripped open by the violent murder of her friend and teacher. She comes to the grave to grieve only to discover that his body is gone. She is devastated, her grief compounded. But in an instant, her weeping is transformed into dancing when she hears Jesus speak her name. She must want to stay in that place with him forever. But Jesus has other plans for her.  He says, “Go and tell what you have seen.”

Like Mary Magdalene, each of us is called to be witnesses to the ways that God brings forth life from death. In our sharing of these resurrection moments, we become the bearers of hope through which community is formed, truth is revealed, and lives are redeemed.

We will be like Mary Magdalene in our truth-telling. We will usher in a new era of justice, kindness, and mercy.

We will rise up.

To sign up for book updates, please visit kateyzeh.com/women-rise-up.

Rev. Katey Zeh is an ordained Baptist minister, a nonprofit strategist, writer, and speaker at the intersections of faith and gender justice.  She is the Executive Director of BrightDot Academy, a personal and professional enrichment initiative of the performance consulting firm Crouch & Associates. She is the co-host of Kindreds, a podcast for soul sisters. Her book Women Rise Up will be published by the FAR Press in early 2019.  Find her on Twitter at @kateyzeh or on her website kateyzeh.com.

Like Loading...
‹ The Women of Lech Lecha by Ivy Helman.
We Have 12 Years. Luckily, Climate Lovers Are Usually Feminist by Tallessyn Grenfell-Lee ›