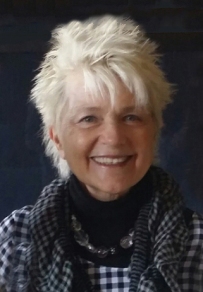 What does it mean to approach the idea of a Godma, a mother-of-all, as an act of the imagination, as a pure act of speculation? I particularly love the word speculator: one who is mining for the diamond, one who is going off the map, a voyager, a voyeur, a seer. A spiritual adventurer. A gambler, a trader in divine currencies.

I am a writer of fictions—speculative fictions. I am a poet-philosopher. Acts of the imagination and divine currencies are my trade.

I like this phrase: In the beginning was an of the imagination, a movement of mind. Or better—an act of procreation, a giving of birth. I love how words lead an idea deeper into the woods. A chance to get lost in variations and find new places to hide and seek. Perchance to meet an angel. Or a wolf. Or yourself in disguise.

Here is a speculation: what if religion is the way the mind leaps towards the ineffable.  Leaps towards the intangibles, the unknowables. Then those free-form leaps become poems, prayers, gods, beliefs which calcify over time into dogmas and orthodoxies.

In world where men created most of the extant religions, what happens when a woman takes the leap?  Or maybe the better question is: what are the preconditions for her leap?   Must she first de-colonize her mind, shedding encumbrances, divesting herself of the rag tag ends of the dominant mythos? Or perhaps she sheds as she goes, becoming lighter and lighter until leap happens.

For me, at the beginning of my journey, the leaps happened close to home, and the decolonization was a scrappy affair.  I was a child born with a speculative mind, prone to questions. Almost immediately, almost unwittingly, I began modifying the religion I was schooled in.

I was seven, being prepared for first holy communion in the Catholic Church, when I made my first radical divestment. Sitting in the classroom, coloring a pair of monkeys to place in the ark, I learned that the god on offer had drowned all the children, and saved only two of each of the animals. My mind slid away and out of his grasp. When I got home, I removed that god from my deck of holy cards.

Doubt is a spiritual gift. Doubt is a ferocious guardian. As a child, this guardian kept my mind and soul inviolate. No matter what dogmas the nuns fed me with my daily bread, the spiritual world that I inhabited remained a secret, sacred garden. If the dogma offended, my childmind dismissed it. The idea of original sin deeply and viscerally offended me. I refused to conceive of it. Refused to picture a smudge on a soul that I had already imagined as a pristine, silvery, winged transparency.

Some companionable spirits from the Judeo-Christian pantheon got into my secret garden.  These welcome divinities often came from images on the Renaissance paintings that I first encountered on the holy cards that the Sisters passed out as good conduct prizes. Many of these angels and Marys and Eves eventually enter the world of my poetry and the world of my novel.

In my teens, I looked backwards and sideways for other gods, from other cultures. I minored in comparative religions at University, majored in philosophy. But rather than adopting a new belief system, or adopting newly encountered gods, the discarding of old beliefs and familiar gods picked up its pace. I leaned deeply into the abyss, the glittering cosmic void, the hum of nothingness—the volatile womb of creation, where it becomes possible to know one’s own mind.

I’ve come to see these early acts of divesture as foundational—the building of a springboard into the next mystery.

That said, one mischievous foreign deity did make its way into my secret garden. I was in my thirties when I first read the Hindu Ramayana, and Lord Hanuman, the monkey god, leapt into my mind, knocking over plates and planets, wreaking holy havoc.

Starting over, became my personal mantra. Always making it new.  Leaping like Hanuman into other worlds and other minds. Starting over, the leaps became poems, songs, a Magdalene Mass. Then plays. Then, most recently a novel, White Monkey Chronicles.

As I wrote the novel, I became aware of the abiding presence of my seven-year-old self. Her spectacular freedom to range wide and wildly in realms of spiritual creativity, her freedom to speculate chased me, tagged me. An uninhibited girl ran at my side. A girl who combined the divine and the ridiculous with unselfconscious élan. A dancer in her own light.

White Monkey Chronicles tells the story of a rogue order of nuns who adopt an undocumented deity. At some point I realized that the order of nuns was based on my seven-year-old’s notion of the Sisters who taught me at Blessed Sacrament School in Hollywood, California. These religious women would never recognize themselves, so thoroughly have they been invested with some of the fanciful qualities, I gave them as a child.

I was always a girl who invented gods. Thus, Mother Mary Extraordinary entered the world of White Monkey.

The invention of the gods—that is real subject of this essay.  The first god that I invent in the course of writing my novel is a multi-cultural bastard, the divine issue of the Biblical bachelor Jew and the very married Hindu deity, Sita. Admittedly, this is one of my more transgressive acts of the imagination.  Lord Hanuman just whispered in my ear, “blame the monkey.”

In truth, I believe that the freedom to deconstruct, reconstruct, joke about, play with, recreate the stories about the gods is tantamount to the freedom to have one’s own thoughts. (Paraphrasing Salman Rushdie, who got into boodles of trouble doing just that—having and writing thoughts of his own.) Without these vital speculations there is no spiritual adventure. One never really leaves home if the destination is all too familiar.

It is noteworthy, that the traditional pilgrim is told exactly where they are meant to arrive before the journey is even begun. Mecca, for example. Or in the classic Pilgrims Progress, the destination is The Celestial City. The path is mapped, the obstacles noted, and the destination marked. These closed systems leave the true seeker with nowhere to go. The adventurous mind longs to roam in a spacious cosmocracy, where there is freedom to move and time is elastic.

As a practicing spiritual speculator, I feel most akin to the ancient tribe of poets and oracles who invented the very notion of gods and angels. These are my ancestors, and I suppose I have always been waiting for my moment to arrive—my chance to step up and create a goddess.

Writing White Monkey Chronicles—so many beautiful midnights passed, staring into the infinity that is the computer screen, my fingers tapping out incantatory phrases on the keyboard—I was increasingly aware that the momentum of the story was bending towards the appearance of the Creatrix Mundi: She From Whom All Flows.

First, I gave her a name. I called her the Godma. With her name on my tongue, I felt I had taken my place in a tribal story circle that stretched back to the beginnings of myth-making. My turn had arrived. My turn to tell her story. I gathered a lifetime of gleanings and glimpses.

I wanted her image to personify the motility of spiritual evolution. She could not true to the world-as-we-know-it and be a static entity.  So, I invented a goddess who embodies change, an evolving goddess who is made of the stories that humankind makes, a co-creatrix who is constantly remade by serial acts of the imagination. Made by leaps and bounds.

The poet, the painter, the icon-maker, the prayer-maker, the sculptor, the dancer, the musician, the meditator, the speculator—all of us are her necessary co-creators. She is multi-faceted. Her faces are the multitudes. She is not away. She is here. We evolve together.

We conscious beings are paradoxically both the makers and the made in the divine matrix of her being.

She is every child whispering:

Tell me a story.

There are no direct experiences in her epistemology, merely shifts in the patterns of signals, the electric flash dance of dendrites that link and ignite identities and narratives alike, link and ignite all the infinitesimal points of consciousness. Her personal nirvana is to submerge herself in the illuminated minds of other beings, bathe in the ecstatic effusions of sentients flooded with insights, riddled with game plans.

Isabella Ides is a poet, playwright, and novelist. Most recently her trilogy, White Monkey Chronicles, has garnered critical praise for its multi-culturalism and feminist depiction of radical spiritual hospitality. Winner of several theatre accolades, including a Critic’s Forum Award for Coco & Gigi, and Echo Theater’s National Big Shout Out for The Early Education of Conrad Eppler, Isabella is also the author of a collection of poetry, Getting Dangerously Close to Myself, the creator of the acclaimed Magdalene Mass. www.WhiteMonkeyChronicles.com

Like Loading...
‹ When “The Storm Left No Flowers” – A Review by Sara Wright
Ancient Dreamer by Elizabeth Cunningham ›