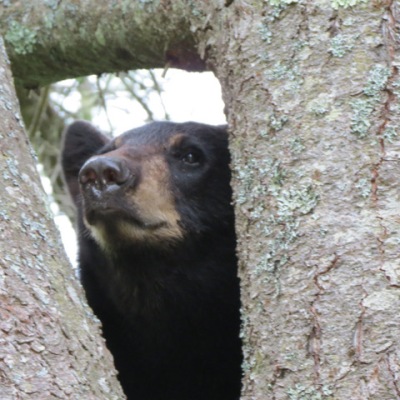 When I look into his face

what he is thinking

as he loses himself

His fear of the unknown

standing on two legs to see

No wonder he climbs trees.

He’s not yet two.

Did she warn him

the need to destroy life

who will gladly spew fire

strike out an eye, maim a paw

so he cannot flee?

He slaps at chipmunks

clasps a metal can to his belly,

kicks it down the hill in play.

circles back for protection

in a thicket of

if not as friend

at least as one

to whom I am speaking.

when I caution him

Do not trust them.

I am the exception

Most want him dead

a shroud on the wall,

in an impossible roar.

Death stands at his door.

Black bears are much maligned and when one befriends one it is hard to understand why these animals are so feared. They evolved with trees as a prey animal and remain this way today. In truth they are immensely curious and shy animals and the hardest part of trying to study them in the wild is finding one who will tolerate my presence.

Early in the spring the young – yearlings – are tolerant of me, but by this time of year they have had enough terrifying experiences with the men around here to turn them into “night bears”. They no longer trust me.

In between there are moments of grace. TB loves to smell lilac blossoms, and gets irritable when brazen chipmunks or mice wish to share his food. He loves rubber balls but punctures them immediately. He plays with sticks and pulls tree branches up on his belly, plays hide and seek with me.

Although the transition from day to night bears signifies the negative experiences these animals have had with others – around here – men who use semi-automatic blasts to terrify and wound them illegally – and hunting season draws near, I have at least had moments that we shared in peace, and for that I must be grateful.

**This is Part Two of a two piece series see Part One here. 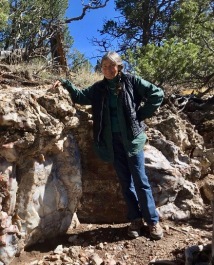 Like Loading...
‹ If Holly Near’s Simply Love Album Were a Musical by Lache S.
Scoring the Goals: US Women’s National Team and the Global Growth of Women’s Soccer by Anjeanette LeBoeuf ›