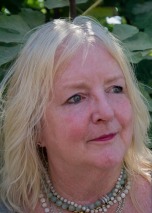 A few days ago while watching the movie The Wife, I kept hearing the words “Ursula Niebuhr, Ursula Niebuhr,” in my mind. I knew the reason was Ursula’s unacknowledged collaboration on the work of Reinhold Niebuhr, which I discovered while writing an earlier blog on uncredited co-authors.

I had not been particularly interested in seeing The Wife because I assumed it was the familiar story of the woman who gives up her career interests when she marries. Want to become a rabbi? Marry one. Want to become an artist? Live with him and become his muse. This is a very old story, and for me, not a very interesting one.

A few days ago plus one, I was watching reruns of Judge Judy on Youtube when the recommendation to watch Sarah Plain and Tall with Glenn Close came up on the screen. While watching it, I was directed to an interview with Glenn Close that turned out to be about her starring role in The Wife. Close told the interviewer that for her the big question was: “Why didn’t she leave him?”

This question was in my mind when I watched the movie the next day. I was surprised to discover that the wife was not simply the woman behind the man, the woman who attends to his every need, assuages his ego, and types his manuscripts. The wife was the author of the books that were published under her husband’s name! I had not expected this turn in the plot. My question became: why did she do it?

The film offers three answers to this question. When the soon-to-be wife tells her lover and professor that his writing isn’t good enough to be published, he suggests that their relationship is over. She says something like “but I love you” and offers to revise the manuscript for him. This saves the relationship.

Her love eventually turns to contempt in the face of her husband’s narcissism, affairs, and heavy drinking. So we why doesn’t she leave?” One answer is provided by a flashback to when the wife is in college. She meets a bitter older woman writer who tells her that no matter how good she is, no one will read her books, because the literary world does not take women writers seriously. At this moment, the wife understands that there is no career as a writer to give up—not because she is not good, but because she is a woman.

Towards the end of the movie, we are given a third answer: “I am a kingmaker,” the wife says. With this revelation we see that the wife takes a twisted delight in creating the fiction of her husband as a great writer that fooled even Noble Prize committee. Through this fiction the wife also got her work published and honored—albeit under a living pseudonym.

“Ursula Niebuhr, Ursula Niebuhr.” Even before the film ended, I began to google her name. This time I found Rebekah Miles’ article “Was Ursula Niebuhr Reinhold’s Coauthor?” Miles suggests that after Reinhold’s stroke in 1952, it is probable that Ursula played a large role in the production of his later works. Ursula’s daughter agrees–with the caveat that her  mother played a major role in all of her father’s books. Ursula’s contribution was acknowledged by Reinhold in his 1965 book, Man’s Nature and His Communities:

I will not elaborate an already too intimate, autobiographical detail of a happy marriage except to say that this volume is published under my name, and the joint authorship is not acknowledged except in this confession. I will leave the reader to judge whether male arrogance or complete mutuality is the cause of this solution.

There are transcriptions of taped conversations between Ursula and Reinhold illustrating “her” contributions to the development of “his” ideas in the couple’s archives. “Complete mutuality” is nothing more than a reiteration of the old adage, “the two become one and that one is the man.” Ursula may not have insisted that she be recognized as co-author of the work, but Edith Turner did so in the case of the book she wrote with her husband Victor Turner, Image and Insight in Christian Pilgrimage. The Turners’ co-authored work was published during the second wave of the feminist movement; Ursula did not have such support.

The Niebuhrs’ relationship was both the same and different from the one portrayed in The Wife. Ursula was not the author of Reinhold’s works. Reinhold’s commanding intellect is not in question. Nor is there any question that Ursula and Reinhold loved and respected each other deeply.

Nonetheless, the relationship cannot have started out on a completely equal footing, given the  differences in age–she was 23, he was 39–and status, and the fact that Ursula had already experienced sexism in her chosen field. Ursula’s application to study as a “fellow” at Union Seminary in 1930 was summarily rejected by its President Henry Sloan Coffin and reinstated over his objections. Despite her own commanding intellect, Ursula not doubt understood that no matter how hard she worked, she would never become a professor at Union Seminary.

Ursula must also have known that her husband’s career would come first, that she would have the primary responsibility for him, and for their home and children. She probably felt incredibly lucky to have fallen in love with the kind of man she would have liked to become. Later, she must have felt thrilled that her theological contributions to her husband’s work were being read by theologians, the general public, politicians, judges, and Presidents–even if she received none of the credit.

Ursula may have compared her “marital happiness” and “theological influence” to the lot of Reinhold’s sister Hilda and decided that she had chosen the better path. Denied the education that was her brothers’ birthright, Hilda went to college only after their father died, and never married. Perhaps having the same theological potential as her two brothers, Hilda chose the “feminine field” of Christian Education. Ursula might have thought:

I don’t have it all, but I helped to create the works that made my husband one of the greatest and most influential theologians of our time. I am not a spinster like my sister-in-law. I love and am loved. I was offered an academic position in the end—not at Union, but at Barnard, where I founded and chaired the Religion Department for twenty years. Who am I to complain about the life I chose?

Not being recognized as her husband’s co-author may not have been something that kept Ursula most up nights. Nonetheless, there was at least one moment when she questioned her choice. She told her daughter’s husband’s mother Claire Sifton that:

it was nice for both the Siftons that the writing they did together was published under both names. Claire Sifton had insisted, in response, that the Niebuhrs’ work had had a tremendous influence, after all, whatever the title page said—to which Ursula Niebuhr replied: “Yes, but my name isn’t on any of the books.”

In our 1972 article “For the Advancement of My Career: A Form Critical Study in the Art of Acknowledgment,” Judith Plaskow and I noted that wives are sometimes thanked as co-authors of their husband’s work. I am not sure how we missed Niebuhr’s classic example of this! Reflecting on the “wife as co-author,” we remarked that the wife might better “be encouraged and given the leisure to do her own work. The husband’s recognition of his wife’s contribution to his work is a reflection of the unequal division of roles in marriage and in society as a whole.”

According to the article “Remembering Ursula” by Julia Stoud, Rebecca Miles is (or was) working on a new edition of Man’s Nature and His Communities to be published under the names of Reinhold Niebuhr and Ursula Niebuhr. This edition has yet to see the light of day, but hopefully it’s day will come—and soon!

Carol P. Christ is an internationally known feminist and ecofeminist writer, activist, and educator currently living in Pachia Ammos, Crete. Carol’s recent book written with Judith Plaskow, Goddess and God in the World: Conversations in Embodied Theology, is on Amazon. A Serpentine Path: Mysteries of the Goddess is on sale for $9.99 on Amazon. Carol has been leading Goddess Pilgrimage to Crete for over twenty years: join her in Crete. Carol’s photo by Michael Honneger.

Like Loading...
‹ A Lover of Bears by Sara Wright
“This Golgotha of Modern Times” by Joyce Zonana ›