When I returned to Lesbos in mid-October, I imagined I would be living in my new apartment in Crete for the holidays. In fact, my lawyer and my realtor insisted that I arrange to transfer money to Greece quickly, as they expected the contract to be ready soon.

When I opened the door and entered into what had been my dream home in Lesbos, I was greeted by the smell of damp and the sight of peeling paint. The previous winter had been the rainiest in many years, one of my living room walls is partially underground due to a slope, and moisture had seeped through the walls. I wanted to move out—and fast.

The house had been empty for most of the previous year and was suffering from neglect. All I could think was how happy I was that I would no longer be living in an old home with a large garden. I found myself camping out rather than moving in: I had no desire to undertake the thorough cleaning and repairs that were needed.

About a week after I arrived, a friend called from the island’s main town where she had spent the night; she had missed the second ferry that would take her from Turkey to Athens. Due to a Greek holiday, she would be stranded for a few days. Could she come to stay? My feelings were mixed. On the one hand I wanted to see her, but on the other, the house was hardly in a state for visitors, I was exhausted, and I was desperately trying to get everything organized for the move.

My friend did not complain about the state of the house. She did, however, comment that I seemed overly eager to leave a house that held many happy memories and a beautiful island that had been my home for two decades. She agreed that the move was the right one for me. Her worry was that I seemed to be throwing a black stone, cursing a village and an island I had outgrown, rather than allowing myself to remember the beauty I had known in the place I was leaving.

She reminded me that I had spent many happy hours watching birds in the wetlands, and she insisted that we visit them together one last time. The island did not disappoint. The sun was shining and the birds confiding. Her favorites were a flock of goldfinches while mine were the juvenile grey flamingos that, unlike their elders, feed on the outer edges of the salt pans.

After my friend left, I threw my energies back into the move: arranging for the carpets to be cleaned; speaking with a moving company; listing my home on a for-sale website; collecting the paperwork for the new land registry; finding workmen to dig three big holes in my garden in the presence of the archaeological service (hoping no antiquities would be found) in order to legalize a 1.71 meters square extension of my bathroom.

Because it was olive season, I could not find anyone to help me clean the house or begin the needed repairs, so I was still camping out. But my cleaning lady finished her olives one day and cleaned the house the next; a day later we worked together clearing the basement; and then she and her husband attended to neglected garden. I began to see the beauty of my home again.

A month had passed and the contract was delayed. The owner took almost two months to submit his paperwork, and we still needed a certificate from the municipality. With the holidays approaching, my lawyer told me that the contract would not be ready until the end of January at the earliest. I was disappointed, but also relieved. I realized that I had been in a manic state, and with time on my hands, I began to slow down.

I had already spent a month working with photographs and floor plans, designing the changes I would make to the new apartment. I had figured out where the furniture and even the mirrors and pictures would be placed. There was nothing more to do.

I decided to polish all my furniture, one room at a time, a job that had also been neglected while I was testing my wings in Crete. Opening drawers and cupboard doors, I remove the things I do not need to take with me. I find this work strangely satisfying and grounding. It allows me to appreciate the beauty of the home I created, while anticipating the beauty of the one I will create.

One of the reasons I decided to move to Crete was that I do not have enough friends in my small village. Had I been in Crete, I would have had several invitations for the holidays. But here in Lesbos, the likelihood was that I would be alone. I toyed with the idea of traveling somewhere on my own, but I had nowhere to leave my elderly dog.

Alone for the holidays I was. We had high and unsettling winds over the weekend, followed by rain and dark skies. I had no desire to leave the house. With my little dog cuddled next to me, I spent the holidays binge-watching television. I found some really good series, including Unforgotten and Unbelievable. The time passed pleasantly: I slept long hours and woke in the darkness to see the sun rise over the castle from my bed. Friends called.

In one of the moments when I was feeling sorry for myself, I remembered my mother’s remedy: do something for someone else. I made a number of end-of-the-year donations to charities. Then I got dressed up, loaded my dog into the car, and took us to a near-by village for day-after-Christmas lunch.

In the early morning dark on December 27, I realized this too is part of my transition. Being alone over the holidays is not so bad, but it is also not so good. It is an important reminder of why I made the decision to move. I will not be alone for the holidays next year in Crete. I already have an invitation.

In the meanwhile, I wait in liminal space. 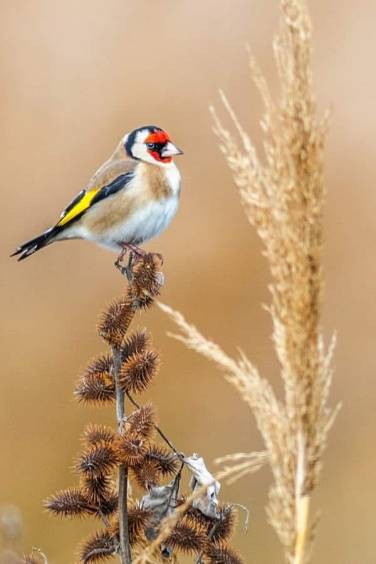 Happy Winter Holidays wherever and however you are!

*Thanks to Cristina Nevans for good advice. Photograph of European goldfinch by Michael Bakas.