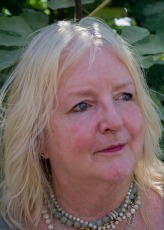 In the 1960s and 1970s, American-born Genevieve Vaughan was living in Rome with her husband, philosopher Ferruccio Rossi-Landi, and their three daughters. When Rossi-Landi, using Marxist models, began to write about language as a form of “exchange,” Vaughan was inspired to articulate her alternative theory based on the idea that language was developed and is learned through the gifts of the mother to the child. From that beginning, Vaughn developed an alternative theory of culture based on what she calls the “gift economy.”

We are born into a Gift Economy practiced by those who mother us, enabling us to survive. The economy of exchange, quid pro quo, separates us from each other and makes us adversarial, while gift giving and receiving creates mutuality and trust.

According to Vaughan, the “exchange economy” is based in the gift economy, while at the same time it denies the gifts it has received from mothers and mothering figures and disparages mothers and their work. Mothers rear children who enter into the exchange economy, but these children would not be alive to enter the exchange economy unless they had first been nurtured by the freely given gifts of mother. Vaughan writes that prior to patriarchy, cultures and societies valued the gifts of mothers and were organized around the principle of gift-giving. Vaughan states that gift-giving economies are based in the idea of meeting the needs of others, while exchange economies are focused on the enrichment of the individual self. She believes that re-valuing and re-instating the gift economy is the only path to creating and restoring peace and justice in the world.

Vaughan’s work has been enthusiastically received by Goddess and matriarchal scholars, who, like Vaughan, intuit that there is a different way of understanding and structuring the world in which we live. Her work has also been embraced by a growing number of indigenous scholars who have found that Vaughan’s theories illuminate the way of life practiced by their communities.

In order to introduce the idea of the gift economy to a wider audience, Vaughan invited Vandana Shiva, Darcia Navaraez, Mary Condron, Heide Goettner-Abendroth, and Sherry Mitchell to join her in a virtual conference that aired on November 27, 2020. This conference was itself an example of the principles of gift-giving. Vaughan funded it, the speakers donated their time and labor, and participants paid nothing. This conference can be viewed on YouTube:

In what for me was the most inspiring talk in the session Sherry Mitchell articulates the connection between valuing the mother and valuing Mother Earth, stating that the gift of life originates for us in the body of the mother, but that after birth, the child must be taught to recognize that all life is nurtured and sustained by the gifts of Mother Earth.

The conference will be followed by series of salons, the first of which, featuring Vicki Noble and Letecia Layson, aired on December 6, 2020.

The next salon will focus on the Nashira eco-village in Columbia which is an attempt to re-instate the values of indigeneous gift-giving economies in the modern world. It will take place on December 19, 2020 and, again, registration is free.

I urge you to tune into the conference and the salons and to share this blog and other information about the maternal gift economy widely on social media. The future of life on our planet may indeed depend on revaluing the gifts of mothers and on re-envisioning the gift economy.

Like Loading...
‹ It’s a New Day By Barbara Ardinger
The Body is a Nation by Sara Wright ›