Home › animals › Toadwise: A Tale for a Life Lover – Part I by Sara Wright

Toadwise: A Tale for a Life Lover – Part I by Sara Wright 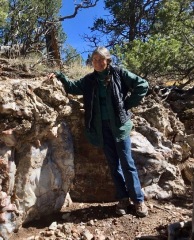 Last night I was thinking about the giant western toad that is living in my garden when I had a peculiar thought: Write a story about the Toad and an Old Woman and call it A Tale for a Life Lover. At this very moment I heard my toad’s rasping guttural cry outside my window. I was so shocked I got up and went out on the porch, hoping to hear the call again, but the toad only spoke once. Afterwards, I wondered if I had imagined it.

When the giant western toad appeared in my yard last week I had been in a state bordering on despair over baffling health issues and the ravages of Climate Change. Maybe it is no longer possible for me to separate the two? After the visitation I sensed that the toad’s abrupt appearance meant something beyond the amazing fact that I had met a giant toad who apparently had been living here all along.

Some preliminary natural history research revealed that the western toad is becoming extinct in the Southwestern states due to UV light, chemicals polluting water, vulnerability to other toxins, loss of habitat etc. so I was even more grateful to have a venerable Grandmother Toad living here near the river’s edge. She must be a grandmother of many thousands –her impressive size suggests her sex and her age.

Toads literally change forms; they are shapeshifters beginning their lives in vernal pools as strings of eggs becoming “toadpoles.” They metamorphose quickly into lung/skin breathing terrestrial toadlets moving away from the water, who, if they survive predation, become adult toads that inhabit meadows and mesas. Most toads also have poisonous parotid glands whose secretions can irritate the skin; a few are deadly. Toads deal with the heat and lack of rain by spending most of the day under protective leaves in gardens, underground or in a burrow, emerging at dusk or during rain to hunt. During a drought, they do not breed. In the winter they hibernate. Toads also shed their skins and often eat them. Mine still had sloughed off skin attached to her back legs. Adults are also long lived, even in the wild.

Two days after meeting Toad who had just shed and eaten a skin I also found an empty snakeskin. Discovering two creatures that shed their skins almost simultaneously couldn’t be coincidence and helped me to prioritize the probable importance of some kind of personal transformation that I was undergoing.

I have intuited by living my life and following my dreams that if I want to learn more about how to be in the world I needed to turn first towards Nature to provide me with a Guide and then to mythology to unravel her/his story. I know a lot about toads having raised so many from tadpoles… so I investigated Toad’s mythology.

Christianity demonizes both women and toads attaching both to evil, darkness, sorcery, and poisoning, a too obvious distortion of Patriarchy which seeks to control both Nature and women and therefore isn’t of much use. Too one-sided. However, what emerges in other mythologies is Toad as a powerful figure, a literal manifestation of the Earth Mother.

Marija Gimbutas mytho – archeologist and scholar traces the toad back to the early Neolithic period 8000 – 5000 B.C. in old Europe when a toad shaped figurine with a flower shaped head was discovered at Sesklo 6000 B.C. – 5800 B.C. The toad/frog motif is common in Neolithic pottery, especially in Italy and Crete. Gimbutas doesn’t make it clear what the distinction is between the Frog and Toad Goddess beyond that the former seems to be associated more frequently with birth and the latter concerns herself more with death and regeneration, a possible distinction I find useful. Certainly both are two facets of one female goddess as Creatrix/Destroyer.

More recently the Egyptian Goddess Creatrix Haquit was portrayed as a woman/frog. Hecate of Greece has a name Baubo that also means toad. Gimbutas also writes that the names given to the toad link it with the goddess in many European languages, for example, hexe in German, and fata in Italian dialects. All words refer to the ability of this goddess to read the future as prophetess. But primarily the toad was associated with the powers of death and her ability to restore life.

Come back for Part II tomorrow…

Like Loading...
‹ Breathe with me by Trelawney Grenfell-Muir
Toadwise: A Tale for a Life Lover – Part II by Sara Wright ›