It Was a Rainbow Graduation by Grace Yia-Hei Kao 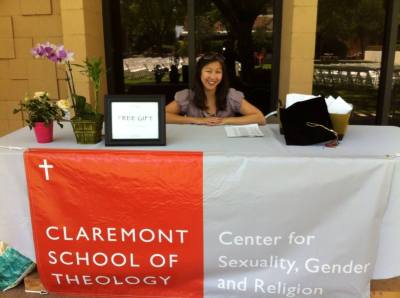 I have the privilege of serving as Co-director of the Center for Sexuality, Gender, and Religion at Claremont School of Theology. I am ecstatic that we just hosted our version of a “rainbow graduation” at this year’s Commencement.

The day before graduation, all CST graduates received a rainbow tassel as a free gift from the CSGR, with the following accompanying letter:

This tassel is a gift from the Center for Sexuality, Gender and Religion (CSGR). It carries with it our congratulations as you receive your diploma from Claremont School of Theology. Well done!

We invite you to wear this rainbow tassel at Commencement and to display it after graduation in a place where you and others will see it on a regular basis.

The colors of the rainbow carry significance in many spiritual traditions; in the Abrahamic traditions of Judaism, Christianity, and Islam, the rainbow signifies God’s covenant with the earth. The rainbow can also signify the diversities of human love, identity, and experience.

A unique part of theological education at CST is a public commitment to the flourishing of, and justice for, persons of all genders and sexualities. On October 11, 2010, National Coming Out Day, the CST faculty unanimously approved the following statement:

Claremont School of Theology affirms its longstanding welcome to LGBTQI students, faculty, and staff. This commitment is in harmony with the specific call of the United Methodist Church toward inclusiveness. It reflects our hope and expectation that welcome and inclusiveness will become the accepted norm throughout the world.

Since 2011, the CSGR has been one of the sponsoring institutions of the Human Rights Campaign’s LGBT Summer Institute in Religious and Theological Study. CST was also selected in 2012 by the Religious Institute as one of the twenty most sexually healthy and responsible seminaries in the nation. Given that CST is a nationally recognized leader in these areas, we hope you will proudly reflect our values in the world as a CST alumnus.

Wherever you serve after graduation, remember that this tassel communicates our best wishes and confidence in you. You are equipped to lead diverse religious, racial-ethnic and social communities, and we look forward to hearing great things from and about you.

I was ecstatic to see the vast majority of graduates, as well as the faculty, staff, and other luminaries participating in Commencement eagerly don their rainbow tassels (n.b., when I told the president of CST of our plan one month beforehand, he said with a smile “I want one, too!” which then prompted us to purchase enough tassels for other non-students participating in regalia to wear one at graduation at their discretion as well).

The tradition of hosting a “rainbow” or “lavender” graduation began at the University of Michigan in 1995 and honors the achievements, hopes, and struggles of graduates whose identities span across the spectrum of gender identity, gender expression and/or sexual orientation. These ceremonies usually take place at a separate time from the formal graduation ceremony and can include awards to outstanding individuals, a guest speaker’s exhortation, some reflections by the graduating students, and a commemorative gift (e.g., tassel, cord, stole, pin) that the graduates are encouraged to wear with pride during the formal graduation ceremony.

As HuffPost blogger Amy Shiner has observed, “the journey is not the academics but the self-discovery,” which is why every college and university should host one. Her conclusion leads me to wonder about the prevalence of this tradition at other seminaries or divinity schools. Does anyone know?

Another tradition that we at the Center for Sexuality, Gender, and Religion instituted this year is the Jeanne Audrey Powers Award. The Award recognizes graduating students from CST and CLU who have demonstrated outstanding service or leadership in LGBTQIA communities and displayed a commitment to be an activist for social change on gender and sexuality issues. Winners receive public recognition, a cash prize, and a gift of a rainbow stole embroidered with their school’s logo.

We named this award in honor of the founding donor of our Center. The Rev. Jeanne Audrey Powers is a retired member of the member of the Minnesota Annual Conference of the United Methodist Church and one of the first women ordained in the UMC (1958). At the time she came out as a lesbian in 1995, she was the highest-ranking UMC official to have done so (n.b., Powers was then Associate General Secretary of the UMC’s General Commission on Christian Unity and Interreligious Concerns).

At a celebratory event called Selah! the day before graduation, the Dean saved the announcement of the creation of the Jeanne Audrey Powers Award and its inaugural recipients for last. My heart soared when the audience gave thunderous applause to Jeanne Audrey when she stood to be recognized when invited to do so. My heart soared again when the three recipients received the recognition they richly deserved for their leadership, service, and dedication.

On a more personal note, I was delighted to have been able to “make a difference” in my community by taking the lead in enacting these new traditions. I am well-aware that these actions are more symbolic than anything else, but I would not have pressed to make these things happen if I didn’t believe that symbolism matters.

I should add that my faith in what can be done in small institutions was also renewed in the process. Had we tried to push through these new student awards or a rainbow graduation ceremony at a larger, more bureaucratic institution like my former one, the process would have required the approval of countless committees and likely taken years to actualize, if ever.

But at a progressive school like Claremont School of Theology, the entire process from inception to the solicitation of nominees for the awards to the purchase and distribution of rainbow tassels and stoles took less than 2 months. Hurray for that!

Grace Yia-Hei Kao is Associate Professor of Ethics at Claremont School of Theology. She is the author of Grounding Human Rights in a Pluralist World (Georgetown University Press, 2011) and is working on two co-edited book projects–one on Asian American Christian Ethics, the other on a theological exploration of women’s lives.

She congratulates all 2013 graduates for their hard work and perseverance and wishes them discernment, personal growth, and success in next steps and future endeavors.

Like Loading...
‹ Third Time’s the Charm by Kecia Ali
Over the Rainbow or…“Over” the Rainbow? by Marie Cartier ›