The ideas that here follow are an effort to organize insights from meditation practice over the past several months.  I submit them to FAR not because they are particularly profound or even well-developed but because I am, as everyone is, navigating meaning in unchartered ways during this epoch.  I find my old truths not only no longer fit; they were imposed, inherited, mind-binding patterns that have caused me damage from which I am ready to heal.  I have discovered that rigorous meditation practice is transforming my experience and understanding in ways that very closely align with the outcomes of feminist deconstruction of patriarchal value norms.  Renewed and serious application of this work, in my opinion, has never been more timely, more universally needed, or more psychically therapeutic.

The teaching of impermanence discloses itself in what might be described imperfectly as both the foreground as well as the deep background of human experience.  It is imperfect to use the terms “foreground” and “background” because these words suggest a stacked-dimensional and binary experience in human life, which is, to say the least, inadequate.  I defer to these terms only for the purposes of suggesting different value experiences that the teaching of impermanence meets along the range of aspects of cognition and self-awareness.

The foreground here refers to the whole realm of conscious patterns that constitute normative, interpretive modalities for being and conduct.  This includes dominant scientific paradigms; accepted social agreements about work or savings or retirement; the value of education and professional success; relationship constructs such as marriage, filial, and parental obligations; and so on.  Foreground narratives or scripts that govern perception can be easily punctured by the teaching of impermanence, which is not to say that the ego easily accepts the breakage of these scripts since it doesn’t.  It is merely to suggest that sooner or later, all such “realities” are experienced as illusory when they fail or exceed one’s grip, whether on account of age, fortune, see change, war, famine, some other tragedy, or simply the inevitable passage of time.

The intentional practice of sitting with impermanence upends foreground constructions in an anticipatory or preemptive way, such that the self is not wounded by the fact of impermanence but rather liberated by it.  To say this more simply, it is easy enough to accept the fact that my job and its value; my relationships and their meaning; the structure of my house; and even the integrity of my body are all subject to inevitable change.  The sooner I understand this, the less wounded I am when it happens.

The teaching of impermanence interfaces with the deep background of human experience in more complicated, more risky-feeling, ways, though.  Deep background here refers to architectural structures in the mind that form the conditions of experience.  This includes notions of good and evil; the concept of love; perception of transcendentality of personal being in self and others; moral being; desire; persistence; and so on.  I find this more challenging to the ego because, while it is easy enough to accept the inevitable dismantling of one’s life (again, not because we want to but because we have no choice in the matter), it is cognitively disruptive to deconstruct (perceived) essential substructures of meaning.  To do so, means that “meaning” itself is at risk. 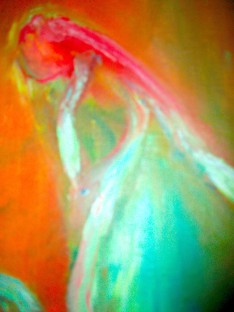 In the intentional practice of sitting with impermanence, I find my own ego here, at this level, flailing like a drowning man, reaching for some driftwood to cling to, as the illusion of specialness or permanence or eternal meaning to my own iteration goes under.  Of course it would…  I like myself.  I like the idea of love.  It seems almost unconscionable that something like my understanding of goodness isn’t somehow attached to some actual Goodness.  It is here, and places like this, that the teaching of impermanence meets existential fear, and this feels varyingly terrifying or heartbreaking, as mind in the apex of clarity perceives not only its own non-being but also the non-absoluteness of everything that made one’s own being seem special in the first place.  This is the 360th degree of the ego, fighting for its meaning even as it dissolves, and it seems like a conflict.  It seems like a conflict, that is, until the illusion of the conflict is also comprehended as merely perceptual.  What remains in its stead is simple, still, awareness. No bright lights; no choirs, just IS (which is, if I may be permitted a joke in all this seriousness, perhaps, after all, the meaning of Is).

In meditation practice, we have discussed two interrelated ideas: whether the teaching of impermanence is nihilistic and what it means to love without attachment.  I think my answer to this is that nihilism still retains an attachment to the ego, which is yet enraged about what it is not, that is, permanent.  Nihilism is an expression of anger and disappointment, such as to say, “If I am not, then, damn everything – it won’t be either!” But, impermanence is not the same thing as nothingness.  And, impermanent things are not valueless, even though “value” is neither more nor less than the momentary relationships of transitioning being.  Yet, here, this is where the possibility of love without attachment dreamily arises.  For, love without attachment does not mean that I myself love in an unattached way, freed of the demand and greed I have for the object of my affection (although that is certainly an improvement).  It means, rather, that real relationship is possible when a self can be delivered of its existential fear.

A self that can manifest itself in a particular way, as myself, as such and such a person, without having any particular agenda, can actually attend to this moment, this person, this situation.  It is a self that can actually meet someone or something else, precisely because the encounter is not colluded with the assertions of ego as conditions of engagement.  I would go so far as to say that love can only be love truly when it is unattached in this way, and even more, that all being that manifests without the encumbrance of ego is truly love.

It is easy for me to point at the greed of politics and business and say, ah, “see how they have failed!”  It is even easy for me to look at the things that are falling away, such as work and overtime, especially right now, in the conditions of this epoch, and say, “ah, so be it.  Don’t be attached.”  Here, though, I am still dabbling safely in the foreground.  But, in quieter moments, when I sit, I understand that it comes around quite deeply to what I would typically call “soul,” and there is much work to be done.  Here I glimpse how simple and elegant and light we are already, we all could be.  There is no need even for some grand metanoia.  There is only a need to wake.  There is no chastisement for any of it; just a summons to open the mind, just to not be fear.

Like Loading...
‹ The Grace of Letting Things End by Mary Sharratt
Post-Hysterectomy Reflections: Not All Women Bleed by Ivy Helman ›