How I Loved Myself through Charismatic Worship by Andreea Nica

Breaking up with your first love can be an excruciating process; especially when it happens to be completely entangled with your being. God was my first love and he stayed for a long while. We had many exhilarating times together, particularly within the branch of Christianity I was raised in: Pentecostalism. I fell in love with God when I uttered his divine language at 13 years of age.

Currently, I’m writing my memoir and narrative nonfiction, Freeligious ™, for which I explore the scientific explanations of my charismatic experiences in the church, which inevitably led to a closer attachment to God. In the Pentecostal church, we were encouraged to connect with God through supernatural phenomena.

Examples include: speaking in tongues (glossolalia), healings, trances (drunk in the holy spirit), visions (hallucinations), prophetic messages (delusions), rebuking evil spirits (paranoia), and many more god-friendly activities. While some of my church peers and most outsiders found the charismatic ordeal to be phantasmical and plain ol’ crazy, I became enchanted by the initiation. The initiation process was quite simple really. As believers in Christ, we must receive the baptism of the holy spirit which usually took the form of speaking in tongues, clinically known as glossolalia.

Of course the Pentecostal church never taught us the clinical implications of our supernatural experiences. They were bestowed upon us by the Lord himself in all his glory and power, so for the most part, I didn’t question it. I chose to believe despite my sporadic hesitation periods which I rarely expressed. My first encounter with glossolalia at 13 years old was both ecstatic and terrifying. I recall one of the youth leaders whispering in my ear at an altar call session, “Go ahead; speak it out, do it.”

Not only did I feel immense pressure from the male youth leader but from God. Was I really worthy enough, at 13 years of age, to receive the baptism of the holy spirit? Did the Lord truly want me to have it? In my frenzied state, I just began to mutter the linguistic gibberish acquired from years of listening to other holy-spirit filled folks. However, as I continued in my glossolalic utterances, I began to encounter sensational currents coursing through my body that exerted a sense of empowerment I had never before experienced. 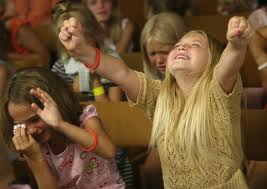 Many women in the church immersed themselves in the charismatic experiences and discovered forms of empowerment through their initiation process. The heightened mental, emotional, and physiological effects of the supernatural ordeals created community, increased self-esteem, and developed deeper connections with our believed creator. Interestingly enough, practicing glossolalia provided me with a greater awareness of my bodily movements, bringing me closer to God while leading to a deeper respect for my body and increased confidence.

I took great pleasure in actively pursuing speaking in tongues, participating in trance-like states (drunk in the holy spirit), and rebuking evil spirits when I sensed them. There was an obscure romanticism behind these spiritual occurrences that was immediately lost when I educated myself of their clinical significance during graduate school. For instance, according to many studies on the Pentecostal sect, regular practice of ecstatic spiritual rituals and worship can have potential links to forms of psychopathology– hallucinations, paranoia, schizophrenic behavior, neuroticism.

Intense religious experiences – such as mystical experience, conversion, and glossolalia “‘speaking n tongues”) have often been explained as symptoms of results of mental disorders (Religious Ideas and Psychiatric Disorders, Hallahmi and Argyle, 1977).

Recent developments in neuroscience focusing on religious experiences discovered the concept of God changes the brain, particularly when the relational concept is directly associated with ecstatic worship and rituals. In the book, How God Changes Your Brain, neuroscientists Andrew Newberg, M.D. and Mark Waldman studies the brain patterns of active members of a Pentecostal church who speak in tongues on a regular basis. Glossolalia is typically accompanied by trance-like states such as body gyrations, meditative contemplations, and euphoria.

Interestingly, the neuroscientists found that the sample of Pentecostal members “surrendered voluntary control – and thus a significant degree of ordinary consciousness – by deliberately slowing down frontal lobe activity…which neurologically increases the emotional intensity of the experience”(How God Changes Your Brain, 2009, p. 49). Reading about the neural construction of God led me to not only fall out of love with God, but also provoked feelings of betrayal by the religious community and leaders whom prevented and discouraged alternative explanations of these spiritual phenomena.

During my detachment process, I initially felt freed from the restrictive and phantasmical practices, but to my surprise, my former sense of self-worth and empowerment was dilapidated. I experienced intense withdrawals from the ritualistic practices of my religious past, and longed for the emotional bonding experiences I once shared with God. I realized I had to redefine and rediscover my sense of worth and meaning in the world. This realization encouraged me to become acquainted and embrace my carnality, my role in the environment, and my connection to others.

While my journey was far from simple, I can’t imagine ever living a life that was entirely insular and codependent on a force I now perceive as imaginary. My identity as a woman has reached new heights through my separation from the church and charismatic rituals which so often blinded me from the ‘real world.’ Identity formation is a complex, interconnected process that takes a lifetime to disentangle, develop, and create, but for the first time in my life, I was empowered with the choice to decide what my identity could be.

My pneumatological experiences contributed to the formation of my identity, and I will continue to cherish the positive aspects gained from my experiences, but having a choice to pursue knowledge, alternative truths and experiences, and most importantly, feeling grounded, is the most fulfilling spiritual phenomenon of all.

Andreea Nica is a freelance writer, scholar, egalitarian, and yogi. She holds a M.S. from the London School of Economics and Political Science in Gender, Media, and Culture Studies. Andreea also holds a B.A. in Psychology from Northern Arizona University. Currently, she is writing her memoir on transitioning from Pentecostalism, focusing on institutional power, subjectivities, and socialization. She is the Founder of OrganiCommunications, empowering startups and social enterprises in strategic and digital communication ventures. Andreea plans on pursuing doctoral study within Sociology, focusing on Gender and Sexuality Studies. She is the author of 2 blogs: OrganiCommunications and Progressive Thinking. You can find her in Seattle, WA. with her partner and kitty, probably doing yoga.@convergingearth  @integratedcom

Like Loading...
‹ ETHICS OF INDIVIDUAL RIGHTS AND CARE SENSITIVE ETHICS IN THE CONTEXT OF THE GAY MARRIAGE DEBATE by Carol P. Christ
A Song For All Beings by Jassy Watson ›