Women for a Franciscan World by Dawn Morais Webster

Women: Architects and Engineers of a Franciscan World

This New Year’s Eve I find myself attending Mass at St. Austin’s Church in Austin, Texas. A long way from Hawaii and en route to Argentina which gave us Pope Francis. This Mass is also a celebration of the Solemnity of Mary, Mother of God.

This crossing of many currents is perhaps as eloquent a statement as any on where women have traditionally found themselves in the church—up on a pedestal or totally in service to others. Both exalted and silenced. Tradition has not served women in the church as well as women have themselves served the church and the community through many ministries. The male leaders of the church have been happy to raise their eyes heavenward and sing the praises of Mary and the many female saints while consigning the women around them to positions of pure service, if not servitude.

Women have been seen primarily as little more than petri dishes, vessels for the development of fertilized eggs and the perpetuation of the human race. The refusal to accord to women the right men enjoy of making their own decisions about their lives is the basic dehumanizing affront that underlies the tradition of male dominion over women.

Women who still see themselves as part of the church, look to the New Year, and to Pope Francis, for concrete action that acknowledges the full equality in the church that they have attained in politics, business and civil society. Their patience with men without wombs telling women who have them what they should or should not be doing with “the fruit” therein is frayed to the point of exhaustion. They wait to be consulted, to be accepted as full participants in all aspects of the life of the church; to be acknowledged as equals and be listened to as much as they have been pressed into silent service through the ages.

If anyone can remake the church and promote a more Christ-like spirit, it is a pope who takes his name from the saint who heard and responded joyously to Christ’s call to “rebuild my house.” Leonardo Boff, one of the founding fathers of Liberation Theology expresses just that hope in a comment that Paul Vallely quotes in his excellent book, Pope Francis: Untying the Knots: “Francis is more than a name—it’s a plan. It’s a plan for a poor Church, one that is close to the people, gospel-centered, loving and protective towards nature which is being devastated today.”

More than once Vallely quotes a former long-time aide who describes Jorge Mario Bergoglio’s irritation with the high-handed advice of Rome. He had no patience, we are told, for “Italians with emptying churches telling bishops in countries with growing congregations what they should and should not be doing.” This pope should be able to understand that women who bring life into the world are done with being patronized by men who have no ability to bear the burden and the privilege of doing the same. 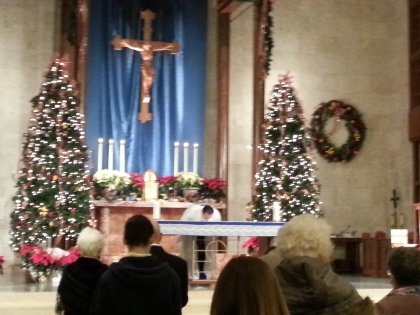 Pope Francis’ attitude towards the meddlesome Curia offers hope to women who have long had to deal with the men of the church telling them what they should or should not be doing with their bodies. Vallely makes the argument repeatedly that this is a Pope who has undergone a personal change: from a charismatic leader who was “unyielding and domineering with the Jesuits in his charge” during his time as Provincial of the order in Argentina to a pontiff who has sent several signals that he intends to bring back the spirit of Vatican II. The man who was once the “hammer” to Liberation Theology with its active solidarity with the poor has taken many steps to usher in its revival. In word and deed, he has embraced “a new model of leadership, one which involved consultation, participation, collegiality, and listening.”

Pope Francis is a pope for our times and for our hurting planet. It is the prayer of millions of people in the pews who have grown weary of the politics of the Church, that he may he continue to be guided by the spirit of the saint who in his time, threw off tradition in favor of the tough truth of the Gospel. And women, given their due, could be this Pope’s most effective engineers and architects for the much needed, long overdue makeover of a church that is in terrible disrepair.

Dawn Morais Webster was born in Kerala. She is the mother of two young adults, and wife of a man with Quaker and Episcopalian roots. She was raised Catholic in largely Muslim, cosmopolitan Malaysia and had her schooling with Franciscan nuns who remain an inspiration. Her blog at http://freecatholic808 is a small voice–but she believes she is part of a much larger community of faith-filled dissenters. Hawaii has been her home for more than a decade. The islands’ mindfulness of its past and the wisdom of those who have gone before, as well as its attention to place and people, help the soul to sing.

Like Loading...
‹ How is it That God Speaks? by Kelly Brown Douglas
Seriously?! Let’s Blame Feminism for the Creation of a “Wimpy” Nation by Michele Stopera Freyhauf ›