Home › Buddhism › The Pull of Mara by Oxana Poberejnaia

The Pull of Mara by Oxana Poberejnaia

Recently I need to take a deep breath every time I glance at the news headlines. There are terror attacks and military conflicts. People kill each other and cause each other immense suffering. The worst thing is that so many of these conflicts are between people who have lived side by side for centuries: between related ethnic groups or neighbouring people.

I have found that often, while reading news items about tragedies and injustices, I often take sides. I seem to “naturally” support one warring party. This would depend on ideology, ethnicity, or culture that I share with one of the rivals. This is nothing new. People have been joining their brethren in war for the history of humanity.

However, our time is interesting in that we have access to many opposing views. In my life, every time I take a side, eventually I manage to find information or discover a point of view, which supports the opposite side.

I remember once I was telling my Mom about the plot of “Battlestar Galactica.” I said: “And because there are so few humans left, the fate of the whole humanity depends on each individual.” My Mom responded: “This is the case at any time.”

Recently I jokingly said to my friend that it feels to me that at the moment, because of accessibility of all the tragic news, there is a war going on for each soul on earth. It seems that each person is tried whether she can withstand the pull of hatred, prejudice and revenge, the pull of Mara. (In Buddhist texts, Mara is the personification of evil, and, in particular, the illusion of the attractiveness of the temporary world.) 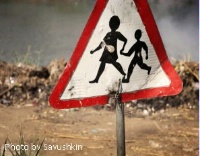 I have been watching an interview of a woman who has taken part in one ethnic conflict. She reflected on the role of women in that war. She said that women, as more emotional beings, follow the call to protect their families. She also described a harrowing and a very emotional episode in the war, when she held a wounded child in her hands, and was thinking that if she was given a prisoner of war from the opposing side, she would have torn him to pieces.

I have no solution for this situation. I have no answer for the eternal question of how to solve ethnic conflicts. However, even this very woman admitted in her interview that women who serve in the enemy’s army must believe they serve the just cause.

As I mentioned earlier, in addition to culture and ethnicity, I also join people on the basis of ideology. There are concepts of justice, truth and fairness. And we all feel these are worth fighting for. At the same time, we realise that people with the rival ideology also have ideas about justice and truth – they are just different from ours. 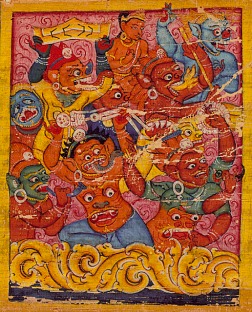 Things they call “mine” I call not so;
I am not one of those so saying.
Hear this, then Evil One, the path
I know you cannot even see.

Mara can always latch to anything to which a person holds on. However, when a person does not respond to a “pull” in any direction, it is described as “attaining final Nibbana without her consciousness becoming established anywhere at all.” (The Life of the Buddha, p. 199)

Like Loading...
‹ With Women by Kate Brunner
Who is She? an excerpt (edited for brevity) from the 25th anniversary edition of The Return of the Goddess, A Divine Comedy by Elizabeth Cunningham ›