Home › Art › Who is She? an excerpt (edited for brevity) from the 25th anniversary edition of The Return of the Goddess, A Divine Comedy by Elizabeth Cunningham

Who is She? an excerpt (edited for brevity) from the 25th anniversary edition of The Return of the Goddess, A Divine Comedy by Elizabeth Cunningham

Introduction by Maeve: Elizabeth’s July post usually features an excerpt from my Chronicles in honor of my feast day, July 22.  This year the excerpt comes from the novel that opened the way for my story.  Ever since a playdough figure took shape spontaneously in her hands, Esther, a minister’s wife,  has been on a quest to find out Who She Is! Here she encounters the Lady as the Virgin Mary. (For my take on the BVM, aka Ma, the scene stealer, see The Passion of Mary Magdalen and Bright Dark Madonna.)

A kitchen, yes. That’s what a sacristy was: a sacred kitchen, Esther mused as she stood in St. Paul’s sacristy, the light strong but thickened by the plain, stained-glass, lead-fitted windows over the sink—the piscina, if you were high church. The walls, an ancient, graying yellow, did what they could to reflect the filtered light in a gallant effort to create an atmosphere intended to be cheery.

Esther did feel cheered by the sheer familiarity of this unfamiliar sacristy: the smell of candles, the huge chest for the fair linens, the high counter for flower arranging, the wooden comer cupboard neatly storing glass cruets and vases, bottles of Communion wine, the cleanliness and orderliness of it all. She began a closer inspection with an eye to finding the manual. By the bulletin board, she paused to read page clipped from some devotional pamphlet.

Being a member of the altar guild is a privileged discipline, a service of love, an offering of time, when perhaps the children have dental appointments, ball games, and you yourself have people coming to dinner. It is preparing the altar for a saints’ day, all alone in the sanctuary with the quiet, the peace, the beauty of it all—a special closeness to God; polishing brass and silver, knowing you are doing something beautiful for God, though definitely lousy for your hands—dirty nails and broken cuticles….

Yes, Esther thought, only women could be so privileged…

The whole procedure, painstaking in ritual detail, was taking longer than she had expected. As she scrubbed a vase, Esther looked for a clock and spied one to the right of the sink, a shiny white clock, incongruous with its stolid surroundings. In the next moment she forgot all about noting the time. 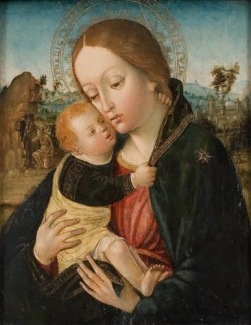 Painting of the Madonna and Child by Ambrogio Borgognone. (Not the exact image described in the excerpt but similar).

Above the clock, in a cheap frame, hung a picture of the Lady. Esther had not noticed her before. She was well above eye level, the dark frame blending with the wooden ceiling of the sacristy. Putting the vase in the drainer, Esther stepped back to get a better view. The painting seemed muted, suspended in a perpetual dusk. Only the golden flesh of the mother and her child gleamed. Esther crossed to the door and found the light switch.

Now the image revealed the subtle richness of color that marked it as Renaissance. Of course it was only a paper print. Esther could see the creases where it had once been folded. Someone must have unearthed it from a drawer and had it framed and hung in the sacristy to encourage the women, hand-maidens and matrons, in their devotion.

For all that it was a worn print, crookedly hung in a dark corner—or perhaps because it was—the picture moved Esther. Mary wore a mantle that could be called neither blue nor green; it was a darkness that held both. Her dress was red, earth red. What you could see of her hair beneath her mantle was a gold that had nothing to do with blonde. Her lids were half-lowered over dark brown eyes. Her skin tones conjured images of Mediterranean sun, olive trees, figs, dates, vineyards. So did her son’s. Jesus, a deliciously fat, naked baby, about nine months old, was flexing and wriggling his toes. One dimpled arm reached across his mother’s breast towards the black lace border of her dress.

Esther raised her eyes to Mary’s face again: the smooth, almost perfect oval, the merest whisper of rose in her cheeks, given fuller expression in her lips. Was it the veiled eyes; was it the generous mouth, not pursed exactly, but somehow restrained; was it the artist’s intention or her own imagination that made the sweetness of the moment depicted almost unbearably sad?

Both Esther and the painter knew: Jesus would remain behind at the temple, without telling his mother, at the age of twelve. Later he would go off into the desert and into his ministry where she could only trail him with the crowd. “Who is my mother?” he would answer when she asked to see him. Repudiated or not, she would watch him die, cradle his dead body as she had cradled him newborn, swaddle him for the grave as she had swaddled him in the manger. And what of the Resurrection? There was no account, as far as Esther knew, of a mother and son reunion.

The image swam. Why was she weeping? The inherent pathos of the story? Or was there bitterness in her tears. Even anger. Because being a woman meant tending the body, so that others could ignore it, sacrifice it, transcend it. Wiping the tears and the shit, washing the diapers or the swaddling bands. Rinsing the purificator, cleansing it of lipstick stains and sacred wine. Polishing the brass, breaking your cuticles for God. Quietly, invisibly. Without making claims. 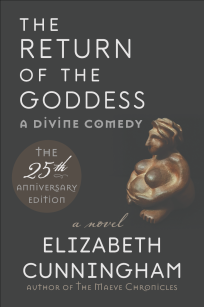 The Lady, who is she?

What would happen, Esther wondered, if Mary ripped off her mantle to reveal, say, dreadlocks? What if she decided one night to dance naked under the moon? What if she took a lover? Or flew into a rage? Even given her eternal maternity, what if the paintings and the statues showed what giving birth was really like: the pain and the blood, the power of it, the fierceness?

Elizabeth Cunningham is best known as the author of The Maeve Chronicles, a series of award-winning novels featuring a feisty Celtic Magdalen. The 25th anniversary edition of The Return of the Goddess, A Divine Comedy will be published on September 1, 2017.  She has published three collections of poems, most recently So Ecstasy Can Find You. Her debut mystery novel, Murder at the Rummage Sale, was published last summer; she is at work on a sequel. Her graphic novels The Book of Madge and Madge Returns are forthcoming this November. An interfaith minister and counselor in private practice, she lives in New York State’s Hudson Valley. She is a fellow emeritus of Black Earth Institute.

Like Loading...
‹ The Pull of Mara by Oxana Poberejnaia
Another One Bites the Dust: Orthodox Priest Defrocked for Declaring God Our Mother and Father Is Love by Carol P. Christ ›

Tags: Celtic Magdalen, Elizabeth Cunningham, The Maeve Chronicles, The Return of the Goddess