In Andean traditions the entire month of August is devoted to Pachamama.

Pachamama is the Supreme Goddess honored by the indigenous people of the Andes including Peru, Argentina and Bolivia. She is referred to as both the physical planet Earth as well as the universal Feminine Energy in time and space. Her name literally translates as Pacha – meaning world, land, earth, universe; and Mama, meaning Mother. She is the Mother of the World.

In Incan mythology Pachamama is also celebrated as a fertility Goddess who oversees planting and harvesting. She is responsible for the well-being of plants and animals and is often depicted as a Dragon or serpent representative of the Andean Mountains. When Pachamama feels disrespected it is thought that she causes earthquakes. Andean people believe that recent earthquakes in the region are a result of humanity’s destruction, disregard and disrespect for the planet.

Not unlike many other indigenous goddesses or earth mother figures, Pachamama came to be united with the Virgin Mary following the Spanish conquests in the 16th century which led to a forced conversion of the indigenous peoples to Catholicism. While indiegenous temples were razed with Catholic shrines and churches replacing them, and ancient gods and goddesses swallowed by the one almighty, the animistic religion of the natives could never be fully outcast. The natives held strongly onto their customs and as a result many rituals, ceremonies and traditional beliefs were adapted into Catholic teachings. Thus we see today, old ways of honoring ancient Gods and Goddesses such as Pachamama are still very much alive,  particularly in places such as Argentina, Chile, Bolivia and Peru.

With the formation of organizations such as the Pachamama Alliance in 2004, a partnership with a group of people from the modern western world and indigenous leaders from remote areas of the Equadorian region in the Amazon, Her presence and the ancient Incan prophecy has been spreading. The prophecy  says that we are in the age, now, where the eagle of the North and the Condor of the south fly together. This is a time where the earth will awaken and we will return to natural ways. Hear the words of the Inca Spirit Messenger Willaru Huayta:

“We must return to the ways of nature and recognise that we are part of the sun, moon, earth, water and air. That mother nature is within us and we within her.”

“We must return to the ways of nature and recognising the earth as our sacred living mother. “

“We must return to the ways of nature in the ways we live each day.”

“We must return to the ways of nature and remove the negativity in our lives, the egotism which blinds us to the beauty of the natural way.”

“Pachamama, Mother Earth, has sorrows and cries for us. She sees our ignorance, how we are lost in the darkness, destroying, out of balance.”

The Pachamama organization was formed over the concern of the destruction of rainforests and the worldwide impact this was having. The Pachamama Alliance is about connecting indigenous wisdom and modern knowledge and they are committed to educating and inspiring inividuals everywhere to bring forth a just, sustainable, and thriving world.

My latest painting is of Pachamama.  She emerged as a response to my Pop’s death. On the day we were told he was passing, I stood at my altar and lit a candle. I closed my eyes and clasped my hands in prayer to send him unconditional love and blessings for his journey home. When I closed my eyes, I had a vision of Jesus on the Cross. This was comforting, as well as surprising considering where my faith lies, and that my pop had no religious faith.

At the memorial service the pastor said a number of things which were simple, yet profound.  He spoke of making your ‘dash count’. The dash that sits between the year you were born and the year that you die. Make it count, for life slips on by so very quickly.   Of course we all know this, and we probably say it from time to time, but death is stark reminder of the fragility and vulnerability of life and how we are here only for an instant. It is also a reminder that life is the space in between. It is the mystery. Live it!

The pastor also spoke about the journey we all take home upon our death, and the eternal love and peace that we are held in. His words were comforting and touching, yet death brings with it a renewed deep pondering of life’s big unanswered questions. Who really came to take Pop home? Where has he gone?   Despite having my own earth-based faith there can still arise a degree of uncertainty and questioning of one’s faith, despite how strong it may be.

Two days after the funeral I stood staring at a very large blank canvas. I would usually approach with an intention, but this time I  had only one question on my mind. With tears, a broken heart and a life of beautiful memories spent with Pop, I asked out loud in a stern and demanding voice – who came to take Pop home?

I started to paint, throwing on colours, using plenty of red symbolic of blood, for it was a form of Leukemia, or cancer of the blood, that eventually took hold of Pop. Almost immediately she emerged from the portal. Can you see Her? 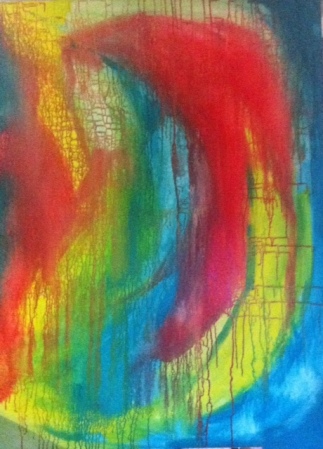 I sat with these initial markings for some days as I was astounded that She (whoever that was) appeared so quickly and so clearly. I still hadn’t received any kind of direct answer to my question, just a sense of a great earthy, feminine energy.

I stood in the kitchen one morning, staring at the work so far, as I do, and I asked again, who took Pop home?  I heard a booming voice, so loud and clear I looked around to see if someone were there: PACHAMAMA!

I had heard of Pachamama as I have been following the Alliance for some time but knew nothing really about the Goddess except that she was an Earth Mother.  When I researched Pachamama, her presence made so much sense for Pop was an avid gardener and provided food for the family for decades. In the veggie patch there still stands a scarecrow dressed in Pop’s clothes. Even after his passing he still resides over the garden that continues to be tended by the family. The garden that I spent hours in as a child planting, digging, picking off pests, pollinating zucchini flowers, chasing butterflies and avoiding bees. 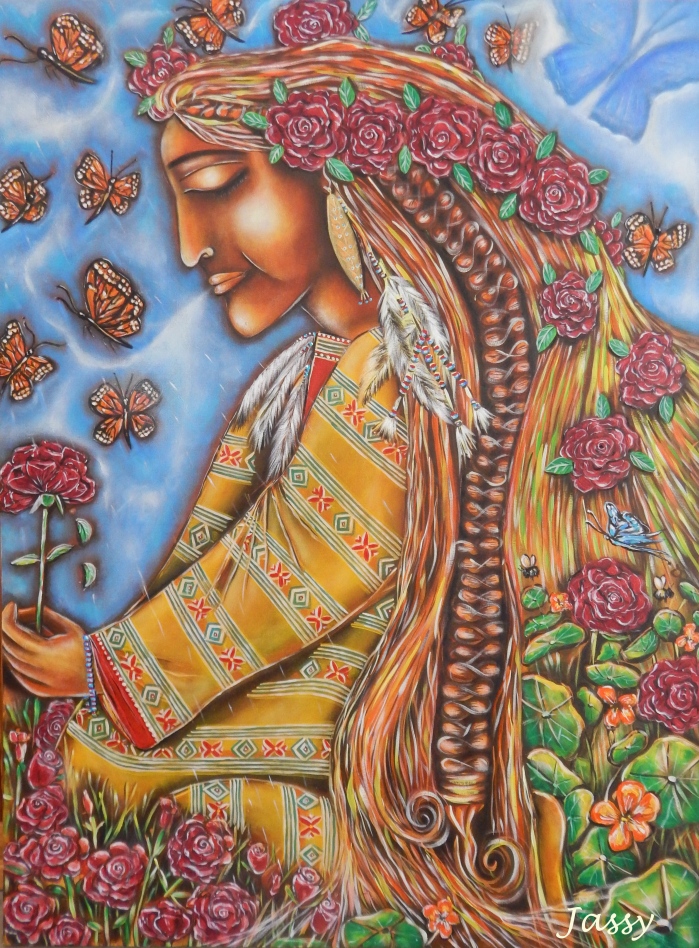 Here she is, larger than life, complete after months of work.

Pachamama’s message is about transformation. Here she represents our eternal oneness with the earth. The red roses inspired by the roses Pop and Nanna have in their garden and by the beautiful display at his memorial.  Pop appears as the blue spirit butterfly on the right, symbolic of his transformation. Blue was his favourite colour. His eyes were a piercing, clear, watery blue and I have vivid memories of a blue tartan dressing gown he wore often. The Spirit Butterfly stands out from the other butterflies, for Pop is the one and only ALBERT FERGUS ROLLINGS whose last breaths became Her sacred breathe on which he was carried home, back to the earth and into the arms of the Great mother, eternally loved and comforted.

So on this day in honour of Pachamama and Pop, and what also coincides with National Tree day in Australia, I will plant a tree (or 3) which is not unlike a traditional Andean ritual offering to Pachamama called Apachates. These are often a hole or well dug into the ground and offerings of all kinds including stones, leaves, seeds or food are buried in the Apachetas to “feed the Mother.” Prior to planting, permission is asked of the Mother to hurt Her with plows to prepare the soil. At this time, men will stab the soil with plows shaped like spears, and women will follow singing to the Mother as they plant.

I would love for you to join me and plant a tree in honor of the Great Mother, in honour of the Earth and all her beings.

This post was originally published on August 1, 2014 on Feminism and Religion.

Jassy Watson who lives on the sub-tropical coast of Queensland, Australia, is a mother of four, passionate organic gardener, Visionary Artist, Teacher, Intentional Creativity Coach and a student of Ancient History and Religion at Macquarie University in Sydney. She is the Creatress of Earth Circle Studios; a small school for the sacred creative arts. Jassy teachers regular workshops based around themes exploring the feminine. Regular creative events and presentations are also held that have included visits from international scholars, musicians and artists. Jassy is passionate about helping women and girls awaken to their creative potential and building community through creativity. See her prints and Soulful Woman Oracle Cards.

Like Loading...
‹ Reflections on the First Harvest by Deanne Quarrie and Belladonna Thomas
Take Only What You Need: Can We? by Carol P. Christ ›