Home › Divine Feminine › Spiritual without a Tradition and Feminist to the Core! by Carol P. Christ

Spiritual without a Tradition and Feminist to the Core! by Carol P. Christ

In “Who Owns the Sacred?” Eline Kieft, who was raised Protestant and considers nature and the ancestors her teachers, noted that those of us who have left the Christian tradition but who have not signed on to another tradition are often demeaned; she writes:

any form of spirituality outside the five major religions is considered as empty, eclectic, post-modern consumerist product that lacks meaning and substance because of its diluted, selective ‘picking’ of traditions from other times and contemporary contexts.

I have heard this criticism from feminists and non-feminists alike.

Since 9/11, Christian feminists have questioned the widespread assumption that Christianity is the only true or important religion. However, recognition of religious diversity among Christian feminists is frequently limited to the 3 so-called Abrahamic traditions. More rarely Buddhists and Hindus are included. In either case, religious diversity is defined in terms of the 5 so-called “great”—and patriarchal–religious traditions: Christianity, Judaism, Islam, Hinduism, and Buddhism. Ironically (or not!) the recognition of religious diversity among feminists serves to underscore the notion that the only legitimate feminists in religion are those who are working to transform patriarchal religions.

Indigenous earth-based traditions are more rarely included. “New” religions such as Wicca or Druidism are acknowledged even less frequently, though they are beginning to be recognized in polls on religious affiliation. Those who do not belong to any “tradition,” old or new, are usually ignored.

It has become popular to speak of “faith traditions” as a way of referring to diverse religious paths. From time to time, I come across petitions asking “leaders of faith traditions” to add their voices in support of a variety of liberal and progressive causes. I do not usually sign. By many criteria I am a “leader” or “founding voice” in the Goddess movement. However, I do not consider myself to be a follower of a tradition, nor am I an ordained “priestess” with a congregation.

Moreover, I do not profess “faith” in any individual, tradition, or text. In fact, I am suspicious of any form of faith that involves giving up discernment and power. All texts and traditions have been transmitted by fallible human beings. All of the so-called great traditions have taught things that I consider manifestly wrong, including the subordination of women, other groups of human beings, animals, and nature. Priests, rabbis, imams, gurus, and other teachers have been guilty of the abuse of power–including sexual abuse–and because of that I would never “trust” any of them.

Like Eline Klift, I learn from nature and ancestors, but do not affiliate with any specific group. I came to love nature through my grandmothers. While floating in the ocean, standing before a California redwood, or looking in the eyes of a deer, I felt connected in the web of life. When I began to study religion, I struggled to understand my connection to nature and all beings as spiritual while being told that the spirit is above, not within, nature.

I was pleased to discover that indigenous traditions find the spirit within nature, but I have not studied with an indigenous teacher, and I am not by birthright or adoption a member of an indigenous group. I have learned a great deal from my study of the religious traditions of Old Europe, including ancient Crete. 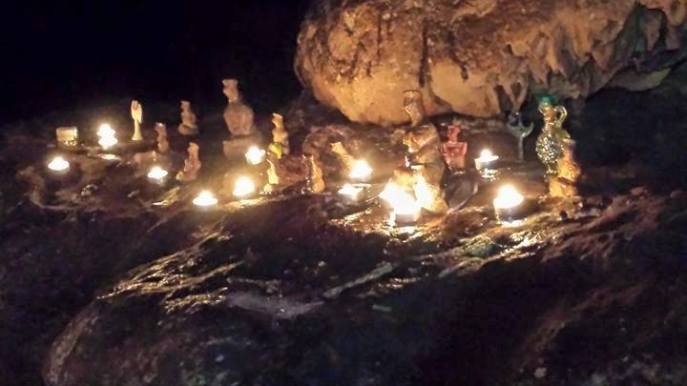 altar in cave in Crete

I find the notion of reverence for the powers of birth, death, and regeneration as discussed by Marija Gimbutas meaningful. Yet I am separated from the traditions of Old Europe by several thousand years, and my ancestors have not been engaged in the agricultural work in which this insight is rooted for more than 100 years.

My interest in ancient Goddess traditions was sparked by questions I was asking from within my study and practice of Biblical religions. I was looking for the female God who was missing in them. I first learned about the modern western practice of Goddess spirituality from Starhawk and Z Budapest. For a time, I was captivated by the idea that they might be transmitting a Goddess tradition that had been handed down through the Christian era by witches and heretics.

Before long, however, I came to question certain aspects of this “tradition.” Why was the male God the one who underwent death and rebirth in the journey of the Wiccan year as presented by Starhawk? Who were the “Guardians of the Watchtowers” invoked along with of the four directions and what was a “Watchtower” anyway? Why was “birching” (being spanked on the bottom with a stick) part of Wiccan initiation? Was nudity an intrinsic part of Goddess spirituality?

When I learned that many details I had been told were “Wiccan tradition” were in fact part of Masonic and other western patriarchal traditions adapted by Gerald Gardner, I breathed a sigh of relief. I distanced myself from the idea that there was a Goddess “tradition” that had been inherited from the past that I should be following.

I understand the desire to root spiritual beliefs and practices in the teachings of a tradition. The idea that “our tradition teaches that …” provides answers to many questions. Moreover, the answer “I am a Buddhist,” “a Christian,” or “a Wiccan” provides a sense of personal belonging and satisfies others.

In fact, however, there are many of us who do not “follow” any tradition, old or new, and who do not give up any of our powers of judgment or decision-making to any text, tradition, individual or group. Many, but not all of us, are feminists. Feminism taught us to question all inherited texts, traditions, and authorities. And it warns us not to give our power over to anyone or anything.

As feminists, we are finding and creating answers to our spiritual questions by listening to our bodies and nature and by “picking and choosing” ideas and rituals from a variety of sources. (This is also true to a greater or lesser extent for feminists working within traditions.) The spiritualities that sustain us will be “hybrid,” cobbled together from diverse cultures and traditions. There is nothing inherently wrong with this.

Process relational philosophy tells us that nothing in the world was ever created out of nothing. Every moment is a new creative synthesis of elements of the past. Every “tradition”—no matter how old—was at one time created by bringing together insights and practices that had been handed down from somewhere or from someone.

Those of us whose sex, nationality, cultural inheritance, race, ethnicity, color, or other qualities give us power over others need to commit ourselves to creating a more just world. We should be wary of committing spiritual colonialism. But we should not be made to feel ashamed or inferior because we do not ally ourselves with or follow any religious or spiritual tradition, because we listen to our bodies and nature, or because we derive our spiritual insights from many sources.

And who knows? Our unabashedly feminist creative syntheses might be precisely what the world needs at this point in time.

Like Loading...
‹ I’m Getting Triggered by the Impeachment Trial and I Bet I’m Not Alone by Janet Rudolph
Mis(sing)Understanding: Kobe, Pompeo, and a Paper Towel by Marcia Mount Shoop ›