Home › Ancestors › IS THE SPIRIT OF GREAT GENEROSITY IN CRETE A SURVIVAL OF ANCIENT MATRIARCHAL VALUES? by Carol P. Christ

IS THE SPIRIT OF GREAT GENEROSITY IN CRETE A SURVIVAL OF ANCIENT MATRIARCHAL VALUES? by Carol P. Christ

At a coffee shop in Agios Thomas, Crete last month a perfect stranger offered to pay for the coffees and sodas of the 16 women on the Goddess Pilgrimage to Crete. This spirit of great generosity is rarely experienced in the United States or other parts of Europe, but it is still common in rural Crete and some parts of Greece.

In fact our group was in Agios Thomas because our bus driver Babis, also in a spirit of great generosity, insisted on stopping to show us his village when we were passing nearby. He guided us to see Roman rock cut tombs and arranged for the early Byzantine church to be opened. At the end of the our pilgrimage, Babis stopped the bus at a wooded glen beside a small church where he offered us his own homemake raki, wine, and olives, accompanied by local sheep cheese he had purchased while we were climbing a mountain. After every meal that we ate in local tavernas, we were offered bottles of cold raki, fruit, and sweets.

This spirit of great generosity has long been commented on by travelers in Greece, who often speak of it as unexpected (for them) hospitality to the stranger or traveler. That it is, of course. Through the work of Heidi Goettner-Abendroth, I now understand that the famous Greek hospitality to the stranger has deep roots in matriarchal cultures. According to Goettner-Abendroth, equality of wealth is assured through the widely-practiced custom of gift-giving in matriarchal cultures. Those who have give to those who have less through rituals that also forge the bonds of community—which ensure that the circle of giving will continue. Often these rituals involve sharing food, followed by singing and dancing. The American Indian custom of “give-away” is part of this tradition. 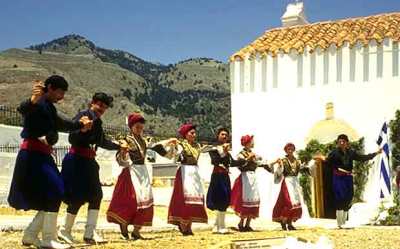 In rural Crete the customs of gift-giving are not limited to kindness to strangers. Rather they are deeply woven into the fabric of communal life. Our group has been invited to two weddings that occurred during our stays in local villages. “Everyone” was invited to these weddings. It was no problem for the families of the bride and groom to include us, because the food and drink were not measured out in terms of numbers of plates and glasses. At one of the weddings, we were served spaghetti with sheep cheese and tomato and cucumber salad, followed by lamb stew, followed by goat stew, washed down with local wine, followed by raki. The band played all night, and everyone from the youngest to the oldest, danced.

I now see that the spirit of great generosity expressed in all of these events has its roots in matriarchal Ariadnian Crete c.7000-1450 BCE. Crete was originally settled c. 7000 BCE during the Neolithic period, which Marija Gimbutas called Old Europe. Crete has been conquered by patriarchal invaders for the last 3500 years—among them the Myceneans, the Dorians, the Hellenes under Alexander the Great, the Romans, the Byzantines, the Arabs, the Venetians, the Turks, and most recently the Nazis. Patriarchy was not only an external force. In 1943 the Nazis shot 500 civilians and burned 6 villages following the battle of Kato Symi. Such violence must also have been practiced by the Myceneans and all of those who followed them.  From Mycenean times forward, religious symbols became increasingly male-dominated, and they increasingly glorified violence. Family laws justified patriarchal rule and inheritance.  War was understood to be a “part of life.”

How did the Cretans manage to preserve the spirit of great generosity in the face of all that? This question was posed by Wendy Valhoff, one of our pilgrims, after her our coffee was paid for by the man who did not know us. She suggested that it must have required great commitment and courage to preserve ancient values for over 3000 years—in the spite of conquest, opposition, and violence. She is right. The survival of a spirit of great generosity rooted in cultural values that conquering powers sought to replace–for over 3000 years–is nothing less than miraculous.

It is not popular in academic circles to imagine that Ariadnian Crete was or even that it may have been “matriarchal.” Even those scholars who affirm that the Goddess was the primary religious symbol, speak of ruling elites and kings. They insist that only ruling elites could have built and administered the “palaces” such as the famous ones at Knossos and Phaistos. Indolent assumptions keep them from seeking evidence of great building projects not built by conscripted labor or slaves—such as Stonehenge–or imagining that principles of participatory democracy could have been practiced—as they were by the Iroquois.

What if we put the shoe on the other foot? What if we ask: how could the spirit of great generosity that we find in rural Crete have arisen in the context of patriarchy, private property, and war? The “rational” answer to this question may be that it would not have. A more “logical inference” may be that the spirit of great generosity still practiced in rural Crete is a “survival” of the values of Ariadnian Crete, the last flowering of the culture of Old Europe. This survival was made possible by the stubborn unwillingness of male and female Cretans to give up the matriarchal value of great generosity they have passed down in an unbroken line for more than 9000 years! This thought gives me hope for the future of humankind.

Carol P. Christ  has just come back from the fall Goddess Pilgrimage to Crete which she led through Ariadne Institute.  There she gave thanks for the gift of life on altars to Mother Earth.  It is not too early to sign up for the spring or fall pilgrimages for 2014.  Carol can be heard on a WATER Teleconference.  Carol’s books include She Who Changes and Rebirth of the Goddess and the widely-used anthologies Womanspirit Rising and Weaving the Visions.

Like Loading...
‹ She Loves It All by Alla Renée Bozarth
A Poem About Sister Love by Marcia Mount Shoop ›