My Immortal Mother-in-Law by Elizabeth Cunningham

Before Olga Eunice Quintero Smyth died on December 4, 2014 at age 101 and 10 months, I was tempted to believe she was immortal, literally. I knew Olga for forty-five years (from age 16 to 61). For thirty-five of those years she was my mother-in-law. Our history began when I was kicked out of high school and went to work at her free-wheeling school, her utter lack of any interest in reforming me a blast of fresh air. It ended with me sitting beside her as she was dying, softly singing “Row, Row, Row Your Boat.”

Olga was named for a Russian princess her mother encountered when she was a babe in her arms en route to Trinidad from her native Venezuela. Olga took for granted her descent from Incan royalty as well. Her mother moved the family to New York when she was eleven. A few years later, she won a scholarship to Mount Holyoke College. She married a classmate’s brother, Julian Smyth, great grandson to Nathaniel Hawthorne. If that weren’t enough, Olga claimed for Julian’s line direct descent from the first century Celtic Queen Boadicea. As long as she could speak, she spun tales. “Where in Africa was she born?” one of her nurses asked me. “What kind of a dancer was she?” 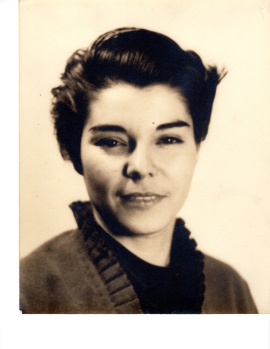 Five feet tall, dark and beautiful, it was Olga’s ambition to go into the coffee trade at the height of the Depression. Job interviewers laughed at her and told her it was a man’s world. Undaunted, Olga changed tack and attended Bank Street College of Education, becoming a pioneer in her field. With her husband, whom she rescued from a dull desk job, she founded High Valley School. Their students did not fit into a conventional classroom for a variety of reasons, all of which now have diagnostic labels. Olga didn’t bother with labels. She just observed each child, his or her quirks and interests. Even kids with severe dyslexia learned to read when encouraged to pursue their passion for baseball or comics. If a child was disruptive, she put him to work in her garden.

A minister’s daughter growing up in the 1950s, I’d seen two alternatives for women: marriage, which appeared to demand self-suppression, or spinsterhood, which seemed to offer some hard-won tranquility. I had never known a woman who did things her own way, who pleased herself and was pleased with herself. Here was Olga confident, sexy, professionally fulfilled. Though widowed in her mid-fifties, she’d enjoyed a happy, unconventional marriage. She was a mother, too. From what I could see, she had it all. If she could, I could, too.

This conviction and Olga’s example stood me in good stead years later when a chorus of women from my mother’s generation (including my mother) informed me I could not be a writer once I became a mother (subject for another post). Though marriage into Olga’s family compound was not without challenges, because of Olga I had a husband who had no traditional expectations of women at all. Suffice it to say, my children are now functioning adults, and I am still a writer.

A lapsed Catholic (once she left Trinidad, religion wasn’t fun anymore) Olga was the most theologically oblivious person I ever knew. Yet when I was ordained she gave me a clergy stole woven in Guatemala. The subject of my novels didn’t interest her much, but she funded some of my research trips. She preened when she recognized herself in Spencer Crowe in The Return of the Goddess. She clearly inspired Maeve’s eight mothers and their motto, “A story is true if it’s well told.” There is a definite resemblance between Olga and the sublimely imperious Virgin Mary in The Maeve Chronicles. The mother-in-law/daughter-in-law story in Bright Dark Madonna owes much to our relationship. In Red-Robed Priestess, I turned to Olga’s favorite queen Boadicea (Boudica). I dedicated Wild Mercy to her, a collection of poems based on the tarot. “To Olga Smyth, the first Empress I ever knew. “

When we were no longer able to care for Olga at High Valley, where she had her school and where I ran a center after she retired, I grieved deeply. In my mind, Olga and High Valley were one. Olga had more to teach me. She remained Her Self, no matter where she was. Even when she could not move or speak, people responded to her extraordinary presence.

Through her last days (and beyond), Olga inspired/s me, becoming one with a character called Ancient Dreamer, part of a poem cycle in progress. I offer these in Olga’s memory with gratitude and love.

song of the ancient dreamer

you don’t need open eyes to see
you don’t need to be awake to wander.
the mountain thinks it’s old
but I am older. if you see me,
and maybe you won’t, don’t
tread on my mossy bed, don’t disturb
my fine-woven cloak, fresh flowers,
fallen leaves, don’t disturb my powers
bound and freed by dreams.

song to the ancient dreamer

ancient dreamer, you are the boat
and the oars and the sail,
you are the wide, slow river, too
let me ride awhile with you
let me remember your dreams.

ancient dreamer, catch the current
follow the tide to the wild wide sea,
the plains of your face a shore
where I wait and keep watch
awash on the shoals of your breath.

ancient dreamer, there is a rim
where the sky and the ocean meet
and the moon and the sun disappear.
if I don’t see you when you go
I will dream of you when I sleep.

I dreamed I was a tall tree
mightier than most
I gave shelter to many
my shadow was very long
like my almost eternal life.

now I wake to an empty sky,
when the mighty fall
the world must shift.
what will grow, I wonder,
in all the light I’ve left ?

Elizabeth Cunningham is best known as the author of The Maeve Chronicles, a series of award-winning novels featuring a feisty Celtic Magdalen. Her third collection of poems So Ecstasy Can Find You will be published in September, 2015 by Hiraeth Press. She is currently working on a mystery series. An Interfaith minister, she is also a counselor in private practice and a fellow emeritus of Black Earth Institute.