One of my morning practices is Lectio Divina, divine reading. Instead of reading scriptures, I read poems. The practice calls on me to be alert and contemplative. Recently, I have been reading The Shambhala Anthology of Women’s Spiritual Poetry, an extraordinarily diverse selection of poems from 2300 BCE to the late 20th century. I won’t be quoting from the collection, but I do recommend it to FAR readers as a sample of our literary, religious and feminist legacy.

Writing has always been one of the more accessible forms of expression for women. You don’t need expensive paints or canvas, clay or stone. To complete your work, you don’t need access to a theatre or an orchestra. Just a scrap of paper, a writing implement, a stolen moment, and, yes, the opportunity to be literate, not easily come by in many times and places for women or men. If you are literate, the act of writing itself does not require even Virginia Woolf’s much-to-be-desired room of one’s own. Jane Austen is said to have written at the dining room table surrounded by the chaos of family life. 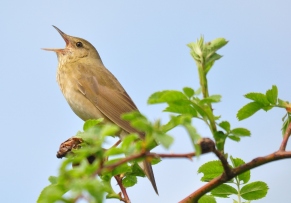 I practice writing poetry for a number of reasons. Several years ago, I scrapped my prose journal, because I could no longer stand to listen to myself go on about my life. If I had something to say, I wanted to distill it to its essence. The best thing about the practice is not the poems, most of which will never see the light of day, but the change in perception. I see poems everywhere as I go about my daily life. Birds, light, wind, plants, water, dreams—and sometimes even fellow humans—touch me at another level, regardless of what I manage to get down in words. Reading poems affects me just as much. In celebration of National Poetry Month I’d like to share a couple of my favorites by my late friends Patricia Monaghan and Johanne Renbeck. (See two earlier FAR posts). I hope you will enjoy and explore their work further.

from Mary: A Life in Verse by Patricia Monaghan

Mary Describes the Angel to Elizabeth

Imagine the look of a man
who will never be a husband:
he has a special thinness,
a resistance to being fed.
He roused in me such freedom!

And when he moved, it was
with the fresh angularity
of adolescence, even though
he was old, old, his skin
sheer as glass, fragile.

From Open the Door to Yearning by Johanne Renbeck

Old ladies are dying, laying
heads of thin hair down on
tables and floors, leaving rooms
littered with lifetimes, leaving
unironed clothes, spindly plants,
torn slacks next to a sewing
machine, leaving newspapers yet to be
read, a magazine open mid-story, a
stovetop unwiped, a puzzle undone, a
disconsolate cat hissing under the bed.
Old ladies are dying, slumping
spines into chairs, leaving
days strewn with lost names and
lost thoughts and lost spatulas, leaving
panic, leaving misery about immobility,
inability, jars that couldn’t be opened,
drawers that wouldn’t slide shut.
Old ladies are dying, leaving
gray wrinkling children to
weep, to rage, to heap disgust.
Old ladies are dying, taking
lifetimes of breathing and heartbeats,
taking lithe limbs, the wink of a man,
babies that laughed, swims in the sea,
work that succeeded, songs that excelled.
Old ladies are leaving.
They are taking their joys, and
leaving the rest behind.

Last night I came into possession of
my entire skeleton.  I thought I’d take it
into my studio and use the parts to make
art, but my husband said he didn’t like the
idea of taking it apart.  He favored burying it
intact.  Folded up there on the dirt, the
skeleton looked so skinny, the bones were
brown and cracked.  With some pleasure, I thought it a
wonder that I’d done as well as I had.

Today, I walked up Breezy Hill, hearing the water
of its brook breaking over rocks next to me, and
up at the next cascade, and the next, sound layered on
sound.  Every bare tree rang with bird song; layers of
song flowed in waves across the hill.  Little feathered
balls of twig bone poured huge songs out to the empty
spaces, filled the hollow places with intent.
Without them, we are lost.

It’s the song of birds that makes it possible to haul bones out of earth,
to string them with sinew, to mold muscle and flesh once again.
It is bird song, bird song alone.

From Sanctuary by Patricia Monaghan

That boreen that circles the big turlough,
its bramble hedges reckless with growth:

I want to walk there in the pale dawn
in spring, deep in the shadow of the hill.

bubbling toward the sea and of small dark-furred
hunters on their secret paths. No wind disturbs

the grass, all is still; deep dust muffles even
my footsteps; time halts; stars dim into pearl.

I want to be walking forever, always on the way
towards a kitchen garden planted with sweet peas

and marrows, with herbs and plums and roses,
I want to be forever almost there, about to arrive,

not quite at the cottage door, I want the scent
of fresh bread to offer me its yeasty promises,

I want never to arrive, never to break out of darkness
into the yellow half-circle of light from the kitchen door,

The poems are reprinted with the permission of Patricia Monaghan’s and Johanne Renbeck’s literary executors, Michael McDermott and Robert Renbeck, respectively.  “Mary Describes the Angel to Elizabeth” is from Mary: A Life in Verse by Patricia Monaghan, Loveland, Ohio: Dos Madres Press, 2014.  “Invitatory: Lauds” is from Sanctuary by Patricia Monaghan, Cliffs of Moher, County Clare, Ireland: Salmon Press, 2013.  It is reprinted by kind permission of Salmon Press. “Old Ladies are Dying” and “Resurrection” are from Open the Door to Yearning by Johanne Renbeck, Staatsburg, New York: Meridian ArtWords, 2014. All proceeds from the latter are donated to arts organizations.

Elizabeth Cunningham is best known as the author of The Maeve Chronicles, a series of award-winning novels featuring a feisty Celtic Magdalen, now also available as audiobooks. She recently published her third collection of poems, So Ecstasy Can Find You. Her first mystery novel Murder at the Rummage Sale is forthcoming from Imagination Fury Arts in August, 2016. A counselor in private practice, Elizabeth is also a fellow emeritus of Black Earth Institute.

Like Loading...
‹ Feminism and Buddhism: constructive wave interference by Oxana Poberejnaia
The Pope Punts and Catholics Vote with Their Feet by Carol P. Christ ›