Home › LGBTQ › The Explosion of the TV Show Queer Eye: Part One By Anjeanette LeBoeuf

The Explosion of the TV Show Queer Eye: Part One By Anjeanette LeBoeuf

In 2019, when mentioning Queer Eye, Queer Theory isn’t on the table, but the Global Netflix hit show is. Responses will range from how each episode gets the viewer to cry, the love of avocado, the French Tuck, and how much this new show means for representation, visibility, and the ardent need for these types of conversations to take place on television screens and homes globally.

The first Queer Eye for the Straight Guy premiered on the cable channel Bravo in 2003. The cast made up of predominately white, openly gay men who would descend into the life of a heterosexual male and do a whole life make over. The show became a hit. The original Queer Eye would run for five seasons and the Fab Five (the five gay men) would become highly popular. 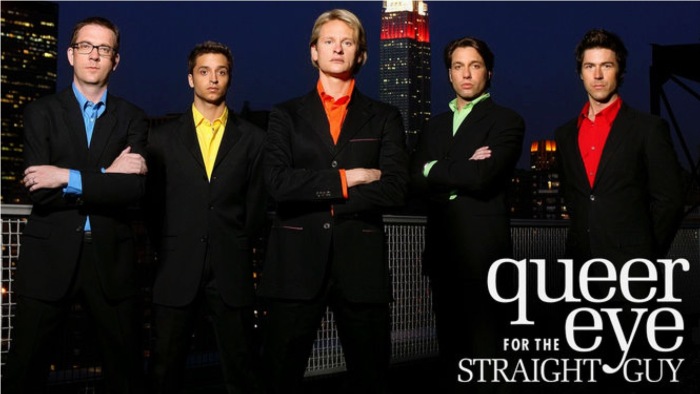 Netflix in 2017, ordered a new season with a new Fab Five. The new Queer Eye premiered on February 2018. By July of that year, Netflix had already ordered two more seasons. The raising popularity of the show continues; two more seasons have been ordered and produced. The new Fab Five: Bobby Berk – Design, Karamo Brown- Culture, Tan France- Fashion, Antoni Porowski- Food and Wine, and Jonathan Van Ness – Grooming. Karamo is an African American, Tan is a Pakistani Brit living in America, and Antoni is originally from Canada. This new Fab Five helps to immediately show the diversity taking place in each episode. 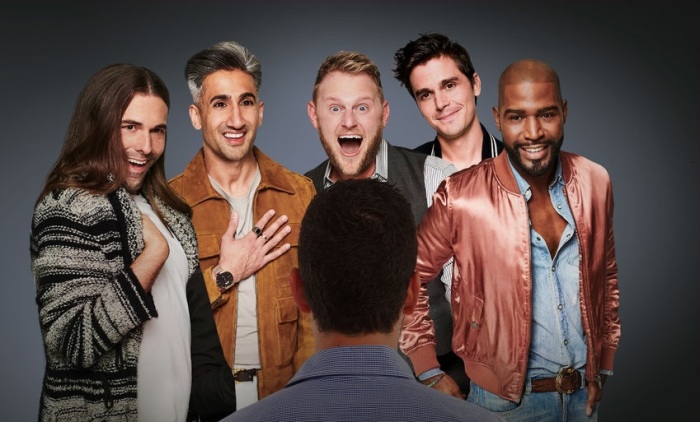 This new version contains the original structure of the Fab Five entering the lives of men and provide support, advice, and make-overs of their looks and houses. The new 2017 series goes beyond making over the physical bodies and spaces of their “heroes” with undertaking hard hitting and important emotional and psychological cleansings.

The first season tackled men from all different races and sexualities. Neal, a South Asian man, has a fantastic moment between him and Tan where they talked about the pressures of being in a South Asian family.

Episode Three introduces a police officer. This episode’s opening sequence has the Fab Five being pulled over by a state trooper with Karamo driving; highlighting the ingrained fear and distrust men of color have with authorities. Karamo brings that to Corey and they have a very visceral conversation about the realities of people of color and police. The gentle yet pressing conversations about the things that can divide people out of fear grows with each episode. The Fab Five also deal with Bobby Camp, a devout Christian father of six. This episode was powerful as both Bobby Camp and Bobby Berk have an important conversation about religion and homosexuality.

Season Two starts in the town of Gay, Georgia to help an African American woman named Tammye. Tammye is a loveable force, a pillar of her church, and a mother to a gay son. This episode is remarkable. (I sobbed while watching this episode on a plane.) Mama Tammye, as she has the Fab Five call her, explores her journey, her road to loving and honoring her son and showing that love and acceptance as Christ’s love in her community. 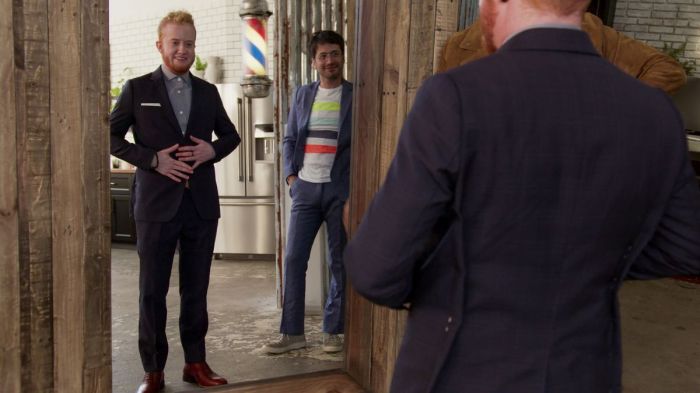 The exploration of transitioning in reality- without the money of Caitlin Jenner- where transition surgeries can accompany complications and money difficulties. Tan expressed that he was not aware of all the components and aspects of the Trans community. I have read so many stories about how this episode changed viewers’ lives, got them connected to others, and gave them the courage to ask for help – queer and straight alike.

Season Three kept up the momentum with the people they were helping including the show’s first lesbian. The Fab Five help two sisters with their BBQ restaurant but more importantly with helping bring out the gorgeous women they were. They bring one of the sisters to the dentist and fix her teeth, in scene that still brings tears to my eyes, she looks at herself in the mirror, smiles, and breaks into tears as she hasn’t smiled fully in years.  The season also looks at a widower who needs help in the final steps of moving past active grief. 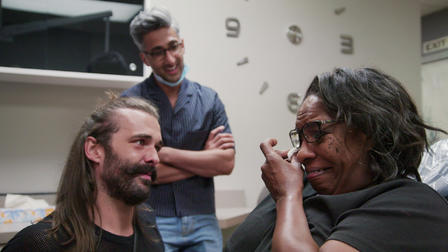 Season Four might be their best due to the range of diversity and issues that each episode tackles. The season starts at Jonathan’s high school to help his drama teacher. The episode highlights the difficulties that queer teenagers faced in the past and what they are still facing today. Episode Two is one of my all-time favorites, as it follows the first disabled hero. Everything about this episode is special – from Bobby renovating the house so that Wesley can do his own laundry, cook his own food, and see himself in his bathroom mirror, to Tan getting his outfits tailored to fit his wheelchair, to Karamo helping him come to a healthier place surrounding his accident and past life.

The season continues with the Fab Five helping a Kansas City Chicana find her identity and grow her arts initiative, a veteran who has undertaken building homes for other veterans, and a farmer struggling to figure out how to survive in a changing society.

The towards the end of each episode, the Fab Five will sit down with the hero and talk about the experiences over the week. This becomes powerful and raw, when both the Fab Five and the heroes expresses how important the process is, what has taken places, and what has been dealt with on highly emotional levels. People watching the episodes have expressed how they have found things in each episode to which they relate to, grow in understanding, and have felt seen and represented. It has brought incredible visibility and representation to a long list of things that have been swept aside, hidden, or not talked about. This show, while marketed as a make-over reality show, is more about finding our humanity and our connections with each other.

Anjeanette LeBoeuf is currently during research for an upcoming book about Japanese Interment Camps. She is the Queer Advocate for the Western Region of the American Academy of Religion. Anjeanette also writes for the activist blog, Engaged Gaze. Her focuses are divided between South Asian religions and religion and popular culture. She has become focused on exploring the representations of women in all forms of popular culture and how religion plays into them. She is an avid supporter of both soccer and hockey. She is also a television and movie buff which probably takes way too much of her time, but she enjoys every minute of it. Anjeanette has had a love affair with books from a very young age and always finds time in her demanding academic career to crack open a new book.