Home › Authorship › Sisters of the Joyous Mysteries: an interview with author Isabella Ides by Elizabeth Cunningham

Sisters of the Joyous Mysteries: an interview with author Isabella Ides by Elizabeth Cunningham 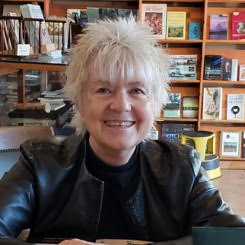 Isabella Ides’ White Monkey Chronicles is my lectio divina, the wisdom, humor, and wonder of her story savored daily. (For an overview, see BJ Austin’s review.) Although the titular white monkey is at the heart of the chronicles, and his charge, foundling/avatar Conrad Eppler, is a boy, I have never encountered a more vivid evocation of goddess—multi-dimensional, earthy, transcendent, fierce, compassionate. No one knows Godma better than the Sisters of the Joyous Mysteries, an order of rogue nuns, the focus of this interview with the author.

Give us a thumbnail sketch of the three remaining members of the order, Sister Mary Subordinary, Sister Merry Berry, and Mother Mary Extraordinary.

Mother Mary Extraordinary is ancient, icy white, her soul as scuffed as an old shoe. Extraordinary’s veil hides long white hair that reaches to her ankles.  Sister Merry Berry is youthful, dark as an espresso truffle, her hair a disarray of dreadlocks.  She ditches her veil, crochets a Rastafarian beret, and adopts a pair of florescent orange running shoes. Nun on the run. The orderly Sister Mary Subordinary is almost without physical detail. She is selfless, a giver, a maker of bread and soup. She is porous. Sometimes her soul escapes her. Mary Subordinary has visitations; the monkey god, for one, slips in.  Subordinary herself can enter other minds, although she tries not to snoop.

Have you encountered rogue nuns in your own life?

I spent my first-communion year at a Catholic school in Hollywood, on Sunset Boulevard. One day on the playground, Sister Mary Agnus asked if I wanted to see the bones of a saint. Yes, I did! She reached into her deep pocket and fetched out a small gold case with red velvet lining and a glass portal.   Forget Mary Poppins. I was enthralled. Yet in my secret life, I did not believe in her god.  I was a seven-year-old redactor, appalled by the vision of an ocean of children drowning as the ark of animals sails on.

Then years of public school in the suburbs drained the world of mystery.  I jumped at the chance to enroll in an all-girls Catholic high school. My notions about nuns changed irrevocably the day I wore a faux zebra coat over my school uniform.  Sister Mary Malua asked to try it on. Her Sister friends giggled like girls.  And with a shock, I was made aware that they were girls. Like me. These young Sisters, fresh off the boat.  Irish – they spoke Gaelic when ruffled — upper-class girls, smart, some of them brilliant, but not very pretty, and not necessarily traditionally gendered.

And none of them as rogue as my creations. Indignant on their behalf, I stepped into the role of fairy Godmother to the Sister Cinderellas — working for no pay, made to obey their priest confessors, denied agency, denied priesthood, doomed to be brides of an indifferent god.  Waving my writer’s wand, I de-colonized their minds, redressed them, and sent them invitations to a spiritual ball, the likes of which they had never known.

Toni Morrison said that she wrote the novels she wanted to read. I wrote the world I wanted for my beloveds.

Their mysterious foundling, Conrad Eppler, is home-schooled by the sisters who have widely and wildly varied approaches to his education. Give us a brief description of their curricula. 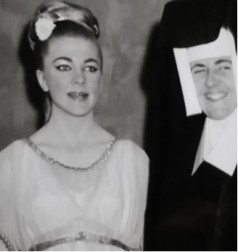 Paraphrasing Marx, from each according to her gifts. Sister Subordinary, mindful of Conrad’s origins, reads to him from the Ramayana, stories of the monkey god, Lord Hanuman, and the story of Guha, her idea of a perfect devotee. Guha’s practice is to faithfully kick the statue of Shiva that the Brahman priests have brought to his forest.  She passes to Conrad the spiritual gifts of discernment and doubt.

Merry Berry gives Conrad the childhood that she never had. This is one of the fascinations of motherhood and mentorhood,  how the child/student changes the teacher. Motherhood is actually one of the deep themes of the Chronicles, that and redemption. How we transform and are transformed by what we create, what we give birth to in the world.

Mothering a child, a planet, a poem, a prayer, a god.

Mother Mary Extraordinary teaches Conrad astral travel. She is a visionary, come to grief over dead and dying dreams. She is cranky, reluctant to crank up further investments in the material world that betrayed her. Her most potent gift comes late in the novel. She is the difficult parent. The dark side of the moon.

The sisters have a highly original approach to prayer, which lands them in mortal trouble with the Great Church. Tell us a little about the flowering of the heretical practices.

The Great Church cast out its rebel brides for ordaining sister priests.  Unbound, all holy mayhem broke loose at the convent.  New sacraments were invented, Sisters married each other, created scrumptious communion breads, and each sister wrote a personal mass, worshiping the gods as she imagined them. Then disaster. The prayer eaters came and licked the pages of the prayer books clean.  When a Sister’s prayer book went blank, death soon followed. And then there were three.  Mary Extraordinary.  Mary Subordinary. Merry Berry.

When the sky-blue baby deity is delivered to the convent, the three survivors crack open one of the old prayer books to enter his name in the litany of infants.  Theirs is a radical hospitality.  All gods are welcome. Well. Almost. This hospitality doesn’t quite extend to those gods who deny that they have mothers, or that claim one-and-only status, or label their progeny the only begotten.  In the Sisters’ theology every child is a coming, and a godsend.

We’ll close with an excerpt from one of the sisters’ prayers:

Litany of the Infants

in refugee camps
in quarantined villages

they set sail in Moses-baskets

afloat on the Nile
launched

teach us thy trade.

Isabella Ides was born under the Hollywood sign and attended a Catholic School on Sunset Boulevard. Her father ran search lights for movie openings.  Thus she was bent towards stage lights and spirit lights from the get go. A poet and playwright, she considers her debut novel, White Monkey Chronicles, the mother lode.  Everything leads to it.  And away.

Elizabeth Cunningham is best known as the author of The Maeve Chronicles, a series of award winning novels featuring a feisty Celtic Magdalen. Her novels The Wild Mother and The Return of the Goddess have both been released in 25th anniversary editions. She is also the author of Murder at the Rummage Sale. The sequel, All the Perils of this Night, will be published in 2020. Tell Me the Story Again, her fourth collection of poems, is now in print. An interfaith minister, Cunningham is in private practice as a counselor. She is also a fellow emeritus of Black Earth Institute.

Like Loading...
‹ From the Biblical ‘Woman on Fire’ to Female Kurdish Fighters: The Women Who Mama Up by Tallessyn Zawn Grenfell-Lee
Bare Bones by Sara Wright ›