What I Learn from Women in Southern Morocco by Laura Shannon

I feel deeply fortunate to be able to travel regularly to southern Morocco. In Taroudant in the Souss Valley, and further south in the Anti-Atlas Mountains, my groups of students have the chance to discover women’s cultural traditions including music and dance, weaving and embroidery, household and healing rituals. In the seven years I have been leading these tours, women have joined me from a dozen different countries and as many different faiths, and most of them end up feeling at home here just the way I do.
What makes southern Morocco so special? Many threads come together to create the extraordinary ambience which permeates this part of the country. First of all, there is the Berber influence: a large percentage of Moroccans in the South are Berbers, and many elements of ancient North African Berber culture, with roots in Neolithic times, remain percepible beneath the relatively recent overlays of Arabic culture and Islam.
The prevalence of Sufism, which views people of all faiths as brothers and sisters in the human family, is another reason why fundamentalist Wahaabi Islam has not gained a foothold here as it has in other parts of the Arab world. The Sufi message, that everyone has the ability to connect to divine grace in their own heart, is one of the elements of the gracious hospitality and warm welcome which my students and I always find profoundly moving.
Moroccan Islam retains many ancient pre-Islamic beliefs, including the reverence for special springs, caves, trees, and other sacred sites in nature. 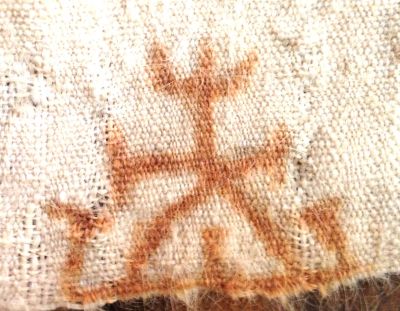 Reverence for ancestors and saints is also still very strong. Everywhere you see the white-painted tombs of marabouts, women and men who lived exemplary lives long ago and are now considered saints. Their tombs are important places of prayer, where individuals may come at any time simply to pray, often with singing and drumming, or to cook and offer food to the poor, in order to receive the saint’s blessing or baraka.
Glimpses of a pre-patriarchal worldview remain visible through the overlays of Christianity and Islam imposed by Romans and Arabs respectively, showing matriarchal structures from earlier times. Traditionally, women always had a central role in Berber society and this remains the case, though in the male-dominated public sphere, this may not be immediately apparent. The indomitable spirit of women here (where, significantly, female genital mutilation is not practiced) shows their strength as individuals as well as in the family and the community. For instance, in stark contrast to Western society, where most women and even young girls report dissatisfaction with their physical appearance (a Psychology Today study concludes that ’84 percent of women and 58 percent of men report having dieted to lose weight’ and ‘a significant minority of [people] believe life is worth living only if you are thin’), ‘Moroccan women accept themselves as they are,’ says my friend Latifa. ‘Whatever you have, you are proud of it.’
This absolute self-acceptance is particularly evident in the hammam or steam bath, where women of all ages, shapes, sizes, and levels of ability go weekly to wash themselves and their children. Because the Moroccan ideal of female beauty is based on an aesthetic of abundance (here, being thin is a sign of poverty and ill health), most women here are plump and seek to stay that way. Another friend, Dounia, tells how groups of women friends will meet at each other’s houses every couple of weeks to talk, laugh, dance, and enjoy their favorite sweet and fattening foods ‘to make sure they don’t get too thin’. The headscarf is not obligatory in Morocco, and many women don’t wear it, but those who do try to tie it to emphasize the appearance of a double chin, which is considered very attractive.
Women’s strength and power is also visible in the way they sing and dance. The different women’s bands who come to play for my groups combine monophonic call-and-response singing with complex polyrhythmic drumming to provide a high-energy opportunity for women to literally let their hair down. With headscarves off, hair and hips flying, women of all ages move their bellies, shoulders and hands in movements which combine grace and strength, sensuality and spirituality. The best dancers are universally appreciated, their talent seen as a way of praising God.
Women also express their knowledge, skill, and power in artwork and handicrafts.

The traditional fassi style (from Fés) of double-sided embroidery requires expert strategic thinking. My friend Bouchra, a master of the craft, foresees every stitch of her entire design, so that the pattern is identical on both sides of the cloth but no stitches are doubled (to avoid wasting thread). This skill is also metaphorical: ‘Women must know where they are going, how to get there and how to come back.’

My friend Malika learned all the textile arts from her mother and grandmother: to spin, weave, sew, knit, embroider, crochet. ‘When we do those things together it relieves stress, it brings calm to our minds and blesses us with the joy of creation. Women need to create, to use their hands and their minds. When women stop doing those things, they begin to get sick.’
All of my upcoming Women’s Dance and Culture Tours to southern Morocco are fully booked, but many other kinds of tours are offered through the award-winning ecological guest house which organises my groups, La Maison Anglaise. For information, visit cecu.co.uk/holidays-with-heart/
Further reading:
Davis, Susan Schaefer (2018). Women Artisans of Morocco. Loveland, Colorado: Thrums.
Makilam (2012). ‘The Central Position of Women Among the Berber People of Northern Africa: The Four Seasons Life Cycle of a Kabyle Woman’ in Matriarchal Societies: Studies on Indigenous Cultures Across the Globe, ed. Heide Göttner-Abendroth. New York: Peter Lang, pp 178-189.
https://www.psychologytoday.com/us/articles/199702/body-image-in-america-survey-results

Laura Shannon has been researching and teaching traditional women’s ritual dances since 1987, and is considered one of the ‘grandmothers’ of the worldwide Sacred / Circle Dance movement. She trained in Intercultural Studies (1986) and Dance Movement Therapy (1990), and is currently pursuing postgraduate studies in Myth, Cosmology, and the Sacred at Canterbury Christ Church University in England. Her primary research in Balkan and Greek villages seeks out songs, dances, rituals and textile patterns which descend from the Goddess cultures of Neolithic Old Europe, and which embody an ancient worldview of sustainability, community, and reverence for the earth. In 2018 Laura was chosen as an Honorary Lifetime Member of the Sacred Dance Guild in recognition of her ‘significant and lasting contribution to dance as a sacred art’. Her articles and essays on women’s ritual dances have appeared in numerous publications, including Re-Enchanting the Academy, Dancing on the Earth: Women’s Stories of Healing Through Dance, She Rises! Vol. 2, Inanna’s Ascent, Revisioning Medusa, and Spiritual Herstories – Call of the Soul in Dance Research. Laura is also Founding Director of the non-profit Athena Institute for Women’s Dance and Culture. She lives in Canterbury, Greece, and the Findhorn community in Scotland.

Like Loading...
‹ Mother of All Fears by Trelawney Grenfell-Muir
Metamorphosis and a Press Conference: A Kafkaesque and Shakespearean Fantasy about an Unreal Individual by Barbara Ardinger ›