Home › animals › TWO TORTOISES IN THE WEB OF LIFE by Carol P. Christ

TWO TORTOISES IN THE WEB OF LIFE by Carol P. Christ

The Gods made only one creature like them—man.  Greek TV documentary

The sight of a reptile or an amphibian usually provokes, at the very least, a feeling of repulsion in most people. Natural History of Lesbos

In the past days and weeks the two tortoises with whom I share my garden have woken up from a long winter’s sleep.  Henry, testudo marginata, has been up for a while now.  More than a month ago when I was cutting back and weeding in the area of the garden where he had been sleeping, Henry roused himself to sit in the sun near me for a few hours each day before creeping back under a shrub.  At first I thought I had disturbed him, but when he came back out day after day while I worked, I began to wonder if he was coming out to say hello. 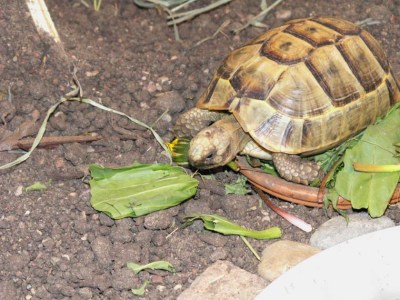 Scotty, testudo graeca, was nowhere to be found.  As I moved my work around the garden, I did not find him in the corner where he had slept the previous winter.  This worried me slightly, but I figured he must be under the rue in the one area of the garden still to be trimmed back.  Imagine my surprise when I almost tripped on him on my way down the stairs to the cellar.  Clever boy, he must have found the garden entrance to the cellar open one day in early winter and slipped in.  The fact that I found him at the foot of the stairs and not in a dark corner was evidence that he too had heard the call of spring.

What we love we protect and what we know we love.  Natural History of Lesbos

In the years Scotty and Henry have lived in my garden, I have come to know and love them.  In truth, I began to know and love tortoises as a child when my Dad found “Torty” trying to cross a busy road and brought him home to live in our backyard.

Before global climate change Scotty and Henry would have slept 4 to 6 months each winter, but in recent years they may wake up on warm winter days.  Their bodies are still “in torpor,” so they move slowly and do not eat.  These days I too sleep more in winter, and when I let myself relax into the dark, I think of the wisdom of tortoises.

As I write on this early spring morning, Henry has just moved out from under a bush and is sunning himself against a warming terrace stone which is receiving the first sunlight of the day.  In an hour or more his blood will be warm and he will begin his daily rounds—walking over, under, and through the plants in search of tender green leaves that suit his palate.  Like the goats, he does not fancy the tough leaves of the aromatics like sage or lavender, but like us, he and Scotty will choose sweets—rose petals, tomatoes, or fruits—over healthier greens.  Tortoises have no teeth, but with their bony gums they tear food they hold down with their flipper-like front feet into bite-sized pieces.

You might think that as cold-blooded reptiles, tortoises would love the summer heat, but I have learned that like humans and other animals, they stay out of the mid-day sun.  In summer they wake up early, warm themselves, and then roam the garden for a few hours.  Then they take shelter in the hottest part of the day and wake up again about 4.

In the days when I drink my morning coffee in the garden, I enjoy the company of tortoises.  They don’t say much, nor do they vary their routines much. They used to hiss when I picked them up, but now that they know me, they don’t do that anymore.  I love to look into their eyes and try to imagine what it would be like to live in slower motion and not to have a great deal to do each day.  I wonder what it would be like to curl up into a house I carried on my back.

Last year I learned that tortoises and turtles perfected their evolution 200 million—200 million—years ago and have changed little since.  Human beings have been around for about 2 million years, modern humans only for 200,000 years.  It is highly unlikely that human beings will be around for 200 million more years, but if life survives on planet earth, tortoises might be.  To put this time frame in perspective, tortoises perfected their evolution while Pangaea was a single continent.

40% of Americans do not believe in evolution at all, and of the 60% who do, most would probably agree with Teilhard de Chardin that “man” is the “crown” and culmination of the evolutionary process.  Those who believe in God might also agree with the ancient Hebrews and Greeks that of all living things, “man” is the most like God.  Some might find the likeness to God in human reason, others in the human capacity to love and care for others.

My view is that both intelligence and the capacity to respond to others are found throughout the web of life and therefore are not uniquely human traits.  If I were Goddess or God, I would admire the ancestors of Scotty and Henry who found and perfected a niche in the web of life that enabled them to survive the movements of continents, massive global climate change, and the great catastrophe that ended the age of the dinosaurs.  If I were asked to choose which I valued more—humans or tortoises—I just might choose tortoises.

*Testudo graeca is vulnerable to extinction in the wild in Greece due to habitat destruction and the demand for pet tortoises in other countries.  Scotty and Henry were born in captivity in the garden of the British Consulate in Athens.  While it is important for human beings to know and love other living beings, we must also respect their lives and habitats in the wild.

Carol P. Christ is looking forward to the spring Goddess Pilgrimage to Crete which she leads through Ariadne Institute.  Take an extra $100 off tour price if you join by March 31 and mention this blog.  Carol can be heard in a recent interview on Voices of Women.  Carol is a founding mother in feminism and religion and women’s spirituality. Her books include She Who Changes and Rebirth of the Goddess and the widely-used anthologies Womanspirit Rising and Weaving the Visions.

Like Loading...
‹ Sharing a Snowstorm with The Goddess of Winter by Carolyn Lee Boyd
Women’s Ritual Dances: The Dancing Priestess of the Living Goddess by Laura Shannon ›