To my lips
a prayer comes
thank you,
I see.

When we decided to buy some land on which to build our home, one of the deciding factors was the wonderful big rocks on the hillside behind where we imagined building our house. Over the years, we would go out and walk through the woods and stand on the rocks, and I often said that I wanted to create a sacred space down there to visit regularly. As I realized later, there was no need to “create” the sacred space, it was already there.

Following two miscarriages, I would often go to the woods to sit on a chair-shaped rock and connect with nature and my body. During my subsequent pregnancy with my daughter, I would return to this place to sit and connect with my baby and prepare for her birth. After she was born, I brought her to these rocks and these woods to “introduce” her to the planet. At some point at the end of 2010, I suddenly “heard” the words priestess rocks when I was standing out on these large flat stones that look out over the horizon. It felt like their name, I suddenly knew it. So, in July of 2012 when I became ordained as a priestess, the priestess rocks felt like the absolutely perfect place to bear witness to my ceremony of ordination. They called me. They named me priestess first.

In late December of 2012, I decided to begin a year-long spiritual practice of “checking in” every day at the priestess rocks in the woods. I committed to spending at least a few minutes there every day, rain or sleet or shine, with children or without, and whether day or night throughout 2013. My idea was to really, really get to know the space deeply. To notice that which changed and evolved on a daily basis, to see what shared the space with me, to watch and listen and learn from and interact with the same patch of ground every day and see what I could learn about it and about myself.

I wanted to really come into a deeper relationship with the land I live on, rather than remain caught up in my head and my ideas and also the sometimes-frantic feeling hum of everyday life as a parent and teacher. When I went down to the woods to “listen” to my idea for this year-long experiment, I spoke a poem that included the word “woodspriestess,” and I thought…maybe this is what I’m doing…maybe this is who I am. When I enter the woods, I often experience what I have termed “theapoetics,” spontaneous, spoken aloud poetry that brings me into direct connection with that which I call the Goddess. 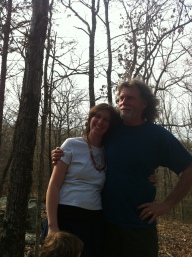 Standing on the rocks with my dad (and my daughter).

As planned, I maintained my woodspriestess practice throughout 2013, eventually spending approximately 330 days in the same place in the woods and learning a great deal in the process. As I described in a prior post, six generations of my family on my paternal side have been born, lived, and died within a 35 mile radius of the very hillside that I find so meaningful now. When asked where I’m from, I know in my bones that I’m from right here even though my parents moved to Missouri from California in the 1970’s (I was born in MO several years after they moved).

While sharing family records with me and drawing a circle over the four county area upon which generations of my ancestors have lived my father explained to me, no wonder you feel like this is your cultural heritage and where you belong. Your lineage is right here, right where you like to be. My ancestors traveled to the hills and woods of Missouri primarily from Tennessee and Kentucky, a blended lineage that includes women from First Nations tribes and white settlers descended from early colonists of the US (hailing from Germany, France, and Ireland).

One April morning in 2013 my dad showed up at my door unexpectedly and said he had an early birthday present for me. My grandmother was deep in the dying process at this time and he said he thought I might need this present. It was a string of what he called “woodspriestess beads” that he had carved for me. On the string is one bead for each of the seventeen species of trees that grow naturally in this part of Missouri as well as a series of beads made from trees that hold some kind of family connection for me.

There is a bead from part of the wood in the tiny house in which I was born and one from the house I grew up in (a restored log cabin built in the 1800’s). Beads are included from the tree I used to swing in with my sister when we were girls, from an apple tree we planted together when I was twelve, and from a peach tree that grew magically from the compost pile. A bead from a memorial tree we planted for my great-grandmother joins one from a maple tree my grandpa mailed to us decades ago from California. There’s a bead from my own homesite, one from the tree under which my third baby is buried, and one from the cedar tree that was the “topper” for the frame of our house.

The blood of earth

feeds me
The blood of the Goddess
holds me

We dance together
in an ancient ecstasy
blood deep
bone rich
holy, potent, and pure.

Molly Meade is a priestess, writer, teacher, and artist who lives with her husband and children in central Missouri. She is a doctoral student in women’s spirituality at Ocean Seminary College and the author of Womanrunes: A guide to their use and interpretation. Molly and her husband co-create at Brigid’s Grove: http://brigidsgrove.etsy.com and she blogs about theapoetics, ecopsychology, and the Goddess at http://goddesspriestess.com.

***I was inspired to make this post after having read several other heritage-oriented FAR posts:

I Come From a Long Line of Beautiful, Strong and Capable Women by Jassy Watson

Connection to Ancestors in Earth-based Theology by Carol P. Christ

We Could Have Been Canadians and Other Thoughts about My New England Colonial Heritage by Carol P. Christ

Echoes of Mesopotamia by Molly Meade

Like Loading...
‹ Who “Gets” to be a Feminist? by Sara Frykenberg
The Importance of Rituals by Elise M. Edwards ›