The Elusive Patriarchy by Oxana Poberejnaia

The sense of separate personal identity is elusive. It is difficult to observe, find and bring to the surface of consciousness where, according to Buddhist beliefs, it dissipates naturally, like a bubble of foam popping. In the same way patriarchy is entrenched in so many different ways and on so many different levels in society that it is as difficult to reach out to it and weed it. 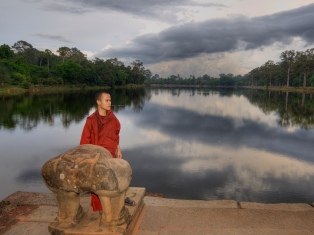 There is a Sutta in Theravadin Canon called “Khemaka Sutta” (About Khemaka). The main character in the Sutta, Buddhist monk Khemaka explains his understanding of the “lingering residual ‘I am’ conceit, an ‘I am’ desire, an ‘I am’ obsession.” Khemaka says that it is as difficult to capture and wash away as the remaining scents in clothes that have been washed over and over again.

In Western psychology, there is a notion of catharsis: allowing one self to experience previously repressed emotions. For instance, ancient Greek tragedies like Oedipus are seen as these psychological journeys for the audience. The spectators initially refuse to admit they have certain forbidden impulses. However, through empathising with the protagonist they unwittingly allow themselves to experience those. Healing happens as a result.

I often witness with surprise patriarchal actions performed by men who outwardly proclaim feminist values. Similarly, some women express feminist ideals and then in the same breath turn 180 degrees. For instance, men might say things like: “I’m all for feminism, but I want my wife to stay home and look after my children.” Women might say: “I aim for career growth. I hate my current job, thought – all my colleagues are female. And my female boss is a bitch.”

Like the “I am” scent, patriarchal values are entrenched into our being. Like the forbidden emotions, we hide patriarchal views. However, patriarchy will resurface unless a person notices her patriarchal inclinations. To do this, one needs firstly honesty, and also power of awareness and concentration.

The patriarchal side of our self hides, escaping from the attention of the conscious “I”, which tries its best to be feminist. Sometimes it helps, like in the case of cathartic dramas, to witness the patriarchal tendencies and actions in other people. This can lead to the sudden realisation that one is looking at the mirror.

Thus, in addition of honesty and awareness, certain bravery is also needed, especially for men. They need to admit that a patriarchal macho still lives beneath the surface of a modern feminist man.

One such man told me that he had an experience where he realised he had been patriarchal. A male friend of his shocked him by displaying angry behaviour and saying hurtful words. The reason behind this was the problems that this friend was experiencing and the tension he held. In a true patriarchal manner, the friend decided to upload this emotional garbage on a junior person.

In effect, this is what patriarchal men do the world over to the women. However, in this case the man who told me the story said he saw himself in this unsightly behaviour and he felt sorry for his own patriarchal attitudes.

Sadly, such instances of abuse directed at men, more often than not lead men to oppress women even more to regain their patriarchal status. Let’s hope that more and more men look into the mirror of patriarchal behaviour, recognise parts of their own selves and change their ways.

Like Loading...
‹ Chants of Help and Self-Compassion to Heal the World by Lache S.
The Reindeer Goddess by Judith Shaw ›