In fact, Avalon does exist, because Jhenah Telyndru did more than wish. In 1995 she founded The Sisterhood of Avalon. Twenty-two years later, the Sisterhood is going strong and growing, attracting members from all over the world. I urge you to explore their website where the Sisters speak eloquently about their vision, structure, and purpose.

I spent a weekend at their Ninefold Festival, an event open to all women, where I’d been invited to be a guest speaker. Though the sisterhood leads pilgrimages to Glastonbury, the probable site of ancient Avalon, the Holy Isle springs to life wherever the Sisterhood gathers, in this case a university field campus where half the cabins turned out to lack heat, and plumbing was somewhat…delicate. A cold snap (on the heels of a heat wave) presented additional challenges, but everyone was cheerful and game and pitched in to help. Everywhere I went I heard laughter, deep conversation, snatches of song. A number of the Sisters are gifted singers and songwriters. Their ritual chants are transporting. I look forward to their forthcoming recording of original music.

Among the participants were women who had known each other for years as well as newcomers, arriving singly or with friends. I was impressed with how warmly everyone was welcomed and included. In her keynote address Jhenah Telyndru spoke passionately of sisterhood, challenging the stereotype of women as untrustworthy rivals, enjoining us to lift each other up, to find collective strength in each sister’s gifts. The Sisterhood is filled with women who have learned to be collaborative leaders and are dedicated to teaching those skills to others. In short, they are building a strong, flexible, evolving structure intended to outlast any individual or personality. The present Sisterhood of Avalon, reclaimed from the past, is creating a dynamic future—which is an act of collective service not just to the Sisterhood. We all need encouragement to imagine new ways to live and connect.

“You are what you do,” Jhenah stressed, a bracing corrective to New Age solipsism.  “You take care of those in your square mile.” Surprisingly my age-old sense of inadequacy (I-can-never-do-enough-and-what-I-do-is-not-good enough) was not triggered perhaps because of Jhenah’s emphasis on discernment of our own particular vocation. The daughter of a fiery preacher of the Christian Social Gospel, I was brought up to believe that writing novels was not service but self-indulgence. Though I have questioned that belief intellectually, that weekend I took to heart that storytelling can also be service. 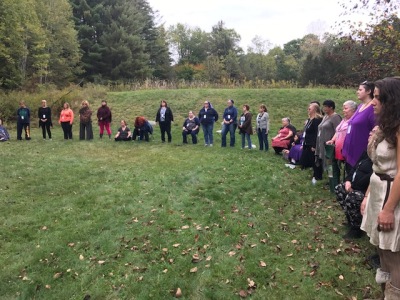 By the end of the weekend, several newcomers declared their intention to join the Sisterhood. In contrast, a women’s circle, who came to the festival together, told me they were content with their own community and added “It is an honor to be able to visit other women’s circles.” The Council of Nine, part of the leadership structure, gave information on how to become a member, but there was no pressure and nothing but respect for women on other paths. I would like to add that though the Sisterhood of Avalon works with Celtic mythology, Welsh in particular, there is no emphasis on ancestry. All women drawn to the path are welcome, and the membership reflects and encourages a growing diversity. (photography by Canita Lee)

Though I am a fan of the Sisterhood, I will not be joining. For eighteen years I led an earth-centered ritual community open to all. Many of us share memories of camaraderie and joy, but none us ever felt called to organize our community. It had a natural lifespan, and now it is gone, though the friendships endure, and seeds may fly and take root in unforeseen ways. That transitory community had one kind of beauty; the Sisterhood of Avalon has another. Instead of reproaching myself for what I had not done, I felt a deepened sense of peace about my choices, one of the gifts of my time in Avalon.

The title of my talk was “Motherwit: for when your/the world feels like it’s coming to an end.” I’d come up with it a year ago and the topic seemed even more relevant that weekend with several of the Sisters coming from Houston. We all returned home to the news of the shooting in Las Vegas. The questions of how to cope, how to survive and rise from personal and global disaster are ongoing. One thing I know: sisterhood is powerful, comforting, and alive. I will close with the poem I wrote for the Sisterhood and for all sisters everywhere.

sisters, we are not alone
although it often feels that way
we are circles
around the sun and moon
ripples widening out and out
expanding rings
of young and ancient trees
stones circles that still stand
sisters, let’s always remember
we can hold each other’s hand

Elizabeth Cunningham is best known as the author of The Maeve Chronicles, a series of award-winning novels featuring a feisty Celtic Magdalen. She has recently released the 25th anniversary edition of The Return of the Goddess, A Divine Comedy. Later this year she will publish The Book of Madge, a graphic novel that opened the way for The Maeve Chronicles. She is the author of three collections of poems as well as the classic cozy mystery novel Murder at the Rummage Sale. She is at work on a sequel. A fellow emeritus of Black Earth Institute, she lives in New York State’s Hudson Valley.

Like Loading...
‹ An Algorithm for Capturing White Heteropatriarchy: The Woman Caught in Adultery and the Failure of the Civil Rights and Feminist Movements to Embrace Intersectionality by Blanche Cook
Restricting Access to Birth Control is Immoral by Katey Zeh ›