At times I am invited to speak about The Pub Church. When I lived in Boston, I was part of a church that met in a pub. A church in a pub is not a typical form of church, obviously; so, people curious about or interested in forming an alternative form of church invite me to speak about it. The invitation is usually for me to share how I started The Pub Church – and that is how people first think of it, that it was started by one person, which was definitely not the case. So, in those moments, I stumble as I try to disabuse people of that idea and try to find the best way to enter the topic of how a new church starts, a topic about which I have strong opinions (more on that later). The Pub Church, Boston grew unexpectedly out of its context. It began with three friends venturing to the local pub to eat fish and chips on Fridays and ended in an experience of community that caused someone to reflect, “why can’t church be more like this?”

Its start is quite different than what people expect. In many ways, those of us who helped start it fumbled our way into it. We didn’t set out to start a pub church or ever imagine that something like that would develop among us, but it did, somehow, and it took us by surprise. I still think this was part of pub church’s magic.

Context: I was new to Boston – having gone out there for my graduate program in 2004. That fall semester a classmate who was from the area invited me to join him at The Crossroads Pub for its Friday fish and chips special, which he assured were the best in town. After that first visit, this weekly Friday outing quickly became a ritual and over time the gathering grew. I invited friends and they in turn invited others. Soon enough we outgrew our usual little nook where five to six of us would sit together (if a bit cozily) and we spread out into another nook doubling our numbers.

It was in that setting that friendships and community began to develop in a way that spark something among us. Some of us in the group were students of theology at Boston University, though not everyone was, nor were they necessarily theologically inclined or interested in Christianity. Nonetheless, our conversations often touched on theological topics and on people’s experiences with church, including the negative, hurtful, and at times abusive experiences some had suffered. The community that was forming at our weekly Friday gatherings prompted us to affirm that our pub gatherings were much more church-like than what many (most?) of us had experienced in actual churches – because for many, both inside and outside of church, Christianity is not Good News. Being in a pub, at a weekly gathering centering around food, drink, and friendship, in which theological topics were discussed and religious experiences processed, people experienced something that felt more church-like, in the best sense of that term, than ever before. 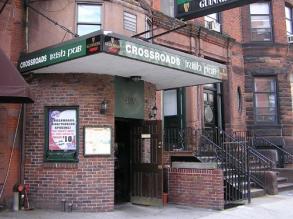 We know, both personally and based on current events, that people’s experiences with church can be negative, hurtful, and abusive. We need only turn to the #churchtoo hashtag to read the stories of so many who have experienced abuse at the hands of people who called themselves Christian – and, worse, ministers. There is a crisis of loss of trust and confidence in the tradition and in its adherents. This was certainly true for some who gathered at the Crossroads. At best, some experienced church as rigid and stifling, a context in which one was not allowed to be oneself but had to conform to the expectations imposed from above, and at worse, church was a source of judgement and condemnation – whether it was for being nonconformist, or for being gay/lesbian/bisexual/queer, or, because when one survived sexual violence, church was not a place one felt welcomed to talk about such things. Instead, its patriarchal language, symbols, and theologies of redemptive violence created a culture that also often extended the abuse experienced. In short, while church had not been Good News for some in the weekly Friday gathering, in the context of this pub and the growing community of friends, Good News was being experienced, embodied.

Thus, the question that started it all, “Why can’t church be more like this?” It was both a question and a clarion call. It provoked our curiosity and our imagination, and for some of us, for the first time in a long time, it provoked a serious interest in the possibility of “church.”

To be continued…next: The Pub Church, Boston: Birth