Home › General › “Not If But When” by Barbara Ardinger

“Not If But When” by Barbara Ardinger

As I’m writing this early in March, the CDC has recently said of the outbreak of the coronavirus (Covid-19) that it’s a question of “not if but when” the epidemic will strike the U.S. As we know, it started in China, where it was underreported. Some U.S. cities are setting up quarantine centers, the Faux New Channel is now proclaiming conspiracy theories about the origin of the virus, and Mr. Trump has appointed Mr. Pence to be Coronavirus Czar. Which would be fine if either man believed in science.

We’ve seen epidemics and pandemics before—the post-World War I Spanish Flu, HIV/AIDS, Ebola, SARS, the avian and swine flus, and many more. This new disease as already killed people on six continents. My purpose here is to briefly review two books in which a pandemic is a major plot driver. You know those books you read and keep and go back to again and again? Two of my go-to novels are Station Eleven (2014) by Emily St. John Mandel and Doomsday Book (1992) by Connie Willis. 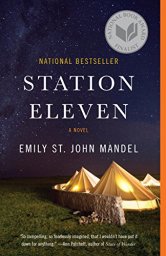 Station Eleven is set in the near future when the Georgia flu, which first appears in the little nation near Russia and has an incubation time of mere hours, wipes out worldwide civilization as we know it. Chapter 6 gives an “incomplete list” of what the Georgia flu did: no more swimming pools, no more ballgames, no more ground transportation, no more electricity, no more light, no more pharmaceuticals, “no certainty of surviving a scratch on one’s hand,” no more airplanes, no more fire departments, no more police, “no more countries, all borders unmanned.”

The novel opens during a performance of King Lear as a movie star named Arthur Leander playing Lear has a heart attack. Jeevan, a member of the audience, runs up on stage to give Arthur CPR, but it’s too late. Later that night, Jeevan receives a phone call from a friend who tells him about the Georgia flu. In just days, it’s filled hospital after hospital. Flash forward twenty years, and we meet Kristin, one of three little girls who had minor roles (no lines) in Lear. Before he died, Arthur gave Kristin a copy of Dr. Eleven, a graphic novel created by one of his ex-wives. Dr. Eleven is about a planet that is mostly ocean and where one safe place is called Station Eleven. Action in the novel alternates between significant scenes from Arthur’s life and Kristin’s adult life.

Twenty years after the Georgia flu has destroyed civilization, Kristin is a member of the Traveling Symphony, a group of survivors who give concerts and perform Shakespeare’s plays. They travel through forests that had been farms and squeeze along roads jammed with empty cars with skeletons in them. (People who tried to escape from the cities.) The Symphony has three pickup trucks (engines removed—no more gasoline) drawn by horses to carry the scenery, though most of the people walk and talk. They travel to a small town where a prophet lives and claims young girls as his wives. They go to an airport north of Chicago, where an old friend of Arthur’s has set up a museum of the 20th century that displays credit cards, telephones, and other useless trash. What happens there? Read the book.

Half of Doomsday Book is set in Oxford University in 2054, half in an English manor house in 1348. It’s fascinating to read books written in the past and set in the future: Willis’ Oxford is filled with highly advanced technology. But let’s just remember Arthur C. Clarke, who wrote 2001: A Space Odyssey in 1968. Did we see any of his and Kubrick’s lovely revolving space ships nineteen years ago?

The History Department of Oxford has mastered time travel in 2054. They send “historians” to observe earlier periods. After Professor Dunworthy and others have trained Kivrin to be such a historian, teaching her Middle English and dressing her for the 14th century, they “drop” her in 1320…and it all goes wrong. The interpreter implanted in her chest doesn’t work at first, so she can’t understand anyone. (There are also “corders” implanted in her wrists so she can fold her hands like she’s praying and record what she’s observing.) She becomes extremely ill as soon as she’s dropped and is picked up by a tall man she thinks must be a cutthroat. (He turns out to be Father Roche, a nearly illiterate priest who thinks she’s St. Catherine.) Roche carries her to the local manor house, where she meets an elderly woman who will later blame the arrival of the Black Death on her and on errors committed by the priest. Also living there are Eliwys, wife of the absent nobleman, and their daughters, Rosemund and Agnes, with whom Kivrin bonds. Kivrin recovers from her initial sickness, but when three nobles of the Catholic Church arrive, they also bring the Black Death. This is when Kivrin learns she’s in 1348, not 1320. And she has no idea where the drop point is. The plague kills everybody in the town, including both little girls. Kivrin and the priest try to treat them, but of course there’s no modern medicine.

Meanwhile, an influenza epidemic overwhelms Oxford in 2054. Dunworthy has to deal with the Acting Head of History, who thinks the flu came through the net from the past and shuts it down, which strands Kivrin in the middle of the Black Death. One of Dunworthy’s allies is an eager teenager named Colin, who is related to the doctor who worked on the drop. Soon the whole city of Oxford is quarantined, and every room in every academic house is filled with sick, contagious people. The technicians who planned the drop, including Badri, who programmed the drop, are likewise sick or have run away. Dunworthy is so busy trying to find a way to rescue Kivrin that he, too, falls ill. It’s not till later, when many of the people in modern Oxford have died, that Dunworthy learns about the technological error that sent Kivrin to 1348, when the Black Death killed half the people in England and Europe. Dunworthy is now obsessed with rescuing Kivrin and bringing her home.

But I’m not going to write a spoiler here. Read the book and find out what happens to Kivrin and Father Roche and Dunworthy and the modern Oxfordians. I could hardly put it down. Considering what we’re seeing on the TV news every day, you won’t be able to, either.

Like Loading...
‹ Are Your Shackles Showing? Hyperbole, Metaphor or Shades of Reality? by Karen Tate
Coronavirus: The Villain Is Not Mother Nature: It Is Ourselves by  Carol P. Christ ›