Home › Feminism and Religion › Designing with the Goddess in Mind: A Meditation on Greek Spring Fountains by Carol P. Christ

Designing with the Goddess in Mind: A Meditation on Greek Spring Fountains by Carol P. Christ

During the past week I have been thinking about Greek spring fountains while designing a water fountain for my new apartment in Heraklion, Crete. When the architect sent photos showing that the tiles had been removed from my balconies, I noticed an enclosed niche that could be used for stacking wood, turned into a closet, or as I began to imagine, would be the perfect place for a fountain to bring the soothing sound of running water to my balcony.

The general design was immediately apparent to me. The water spout would be on the back wall, a low wall at the front of the niche would enclose a water basin, and a motor would recirculate the water. All that remained were the details. I hoped to find a traditional water spout, the sort that looks to me like a womb and to place an image of the Goddess on a shelf on the wall above it.

Greek water fountains are traditionally found at spring sources. Altars and shrines both pre-Christian and Christian were often built near springs. The water spout that looks like a womb can be understood in “the language of the Goddess” as a symbol of Goddess as the Source of Life. Just as women give birth through their wombs with a great rush of watery liquid, even more so the spring gives birth to life, sustaining not only humans, but also animals and plants. The connection of female bodies to the spring source is intensified when we remember that in the division of labor in traditional societies, women and girls are almost always the ones who go to the springs to collect water and bring it home.

Watching this video again and yet again, I feel transported back to Sappho’s school. The singers wear little make-up and eschew the fashionable sexy clothing so many young women in Greece and elsewhere in the modern world prefer. They radiate innocence.

In The Dancing Goddesses, Elizabeth Wayland Barber writes that all over Europe and up until recent times, young unmarried girls went out together in the spring to dance by rivers. Their dancing helped to stimulate the fertility of the earth. Wayland Barber hypothesized that only unmarried girls participated in this dance because their fertility was most powerful because it was stored up, untapped, not yet used to create children.

When I first read this explanation, I was not sure if I liked it or agreed with it. But one night in Piraeus when a newly engaged young woman led the dance at a local taverna, I understood. This young woman was still a girl, yet she danced with assurance of her power to create life. I could almost physically feel seeds from her soon to be fertile womb spilling out onto the floor as she danced.

I had a similar sensation as I watched the young women singing about the special spring. Unlike the newly engaged girl at the taverna, they seemed not to be thinking about men or marriage, but rather to be wholly involved with each other and their song. Their power was in their singular focus. This, I imagine, was also the situation of Sappho’s students.

I searched high and low on line and on the telephone and sent my architect to search, but unfortunately, we were unable to locate a traditional spout—new or used—for my fountain. 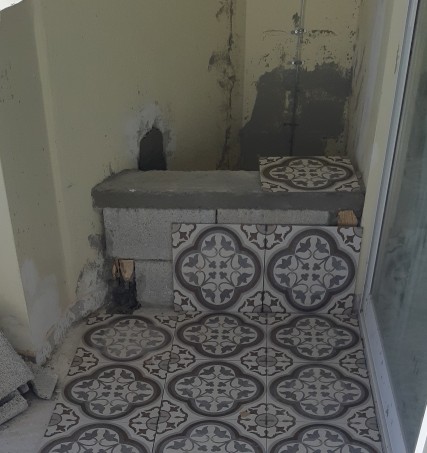 All we could find were brass taps, many with with dragon mouths, and lion head spouts. At first, I rejected the idea of a lion head spout, because lions have been understood to be a symbol of male power: in Crete, the emblem of the overlords from Venice. But this lion grew on me, I especially liked his open, interested eyes. I decided to choose him and for the water to pour forth from his mouth into my pool.

He is not a Lion King. She is the Water, the Source if Life. He is Her child.

Carol P. Christ is an internationally known feminist and ecofeminist writer, activist, and educator who will soon be moving to Heraklion, Crete. Carol’s recent books are  Goddess and God in the World: Conversations in Embodied Theology and A Serpentine Path: Mysteries of the Goddess. Carol has been leading Goddess Pilgrimage to Crete for over twenty years: join her in Crete. Carol’s photo by Michael Honneger.