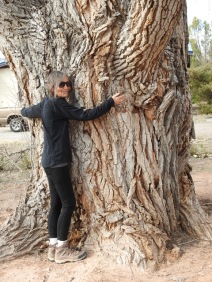 I awakened this morning to frozen raindrops hanging from trees – jeweled beads, snow capped hills, and a cacophony of spring songs – I was serenaded by robins, chickadees, phoebes, goldfinches, and nuthatch tweets as I walked out the door into the early morning sun. I listened for the cardinals, who for the moment were absent. It was cold! 28 degrees at the end of April speaks to anomalies, or more realistically, Climate Change.

Yesterday we had rain, and working in the still damp air is literally a healing experience. The fragrance is a combination of chemicals released by soil-dwelling bacteria, oils released from plants during dry spells and ozone created when lightning splits oxygen and nitrogen molecules that then turn into nitric oxide.

I dug in baby trees that I had rescued from the side of the road the day before. Salt kills tender cedar seedlings if the road crew misses slaughtering them. Around Maine trees are worthless except as an economically viable product, a heartbreaking reality for someone like me.

As I turned over rich woodland earth to create a home for two of the larger seedlings I breathed in the intoxicating scent of moisture laden decaying detritus until I thought my lungs would burst.

After living in a dry wind driven desert for months I am still inhaling woodland air like a starved creature (Fresh unpolluted air is a gift without parallel). Placing my two cedars in their new home near a “mother tree” I tamped down the soil with a deep sense of satisfaction. I also potted up two seedlings with damaged roots hoping that they will recover enough to be planted in the ground by fall. 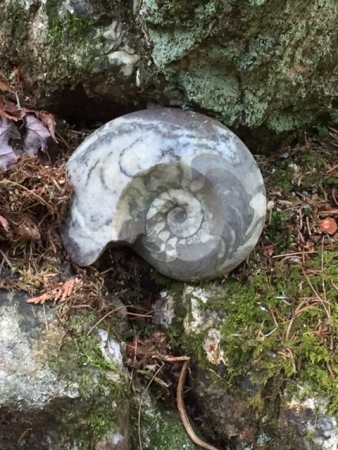 Afterwards I placed the latter in a terra cotta pot below moss covered Trillium rock where I dug in my brother’s ashes on an Earth Day thirty two years after his death. Normally, wild Trillium and Mayflowers are in bloom by his natural granite marker, but not this year – the most consistently cold April I ever remember, and perhaps one that is eerily appropriate.

Normally I do not ‘celebrate’ Earth Day because every day is an Earth Day for me, but this year is different. We are in the midst of a pandemic, one that humans brought upon themselves with their disregard for the Earth. Nature does not discriminate; she is focused on Earth’s survival and our egregious behavior has created a perfect storm for viruses to erupt killing people indiscriminately as S/he struggles to re – dress gross imbalances. Climatologists have been telling us for years that pandemics would occur with more and more frequency as the Earth continues to heat up.

Working outside to dig and plant trees is my way of honoring the Earth, this day and every day. I also honor my little brother. I think how much he would appreciate the cedars I placed under his stone hollow. He loved them as much as I do; Some days, I think I must love all trees for us both.

Like Loading...
‹ Designing with the Goddess in Mind: A Meditation on Greek Spring Fountains by Carol P. Christ
Redemptive Forgetfulness by Marcia Mount Shoop ›