Home › Ancestors › Yes There are Goddesses in the Bible, Part 3

Yes There are Goddesses in the Bible, Part 3

This blog post is the 3rd in a series of looking for female deities in the bible who have been translated out of easy reach or otherwise hidden within its words. In my last blog post I discussed bird imagery and the bible. It is available here.

You can’t complete a discussion about birds without also bringing up Lilith. She appears by name only in one place in the bible; Isaiah 34:14. Isaiah uses the word liyliyth as a feature in a hellish landscape. Although it is also a name, liyliyth is treated as a common noun. The most prevalent translation is “screech owl” although others have included such names as night creature, night monster, night hag, and she-vampire. 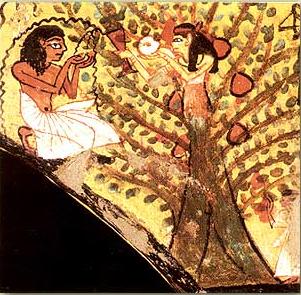 Isis as tree goddess providing nourishment in the form of fruit and drink. From the tomb of Pashedu from the 19th dynasty (1314-1200 BCE).

By biblical times, Lilith had already developed a bad reputation. In Babylonia there are seals that show her as a night demon known for stealing infants. In the Enuma Elish, the Sumerian creation myth, Lilith was a nasty, evil, spirit living in the trunk of the tree that the Sumerian Goddess, Inanna wanted for her throne.

It is interesting that Lilith is associated with tree mythologies. Throughout world mythology there is the archetype of the world tree or the axis mundi. These world trees tend to have some elements in common, most especially a serpent at its roots, a bird in its branches and sacred wells or rivers that feed its roots. These wells are often described as holding the knowledge that nourishes the tree.

There are examples all around the world of the world tree. The Garden of Eden is not one of them as there is no bird in either of the trees – the Tree of Knowledge nor the Tree of Life. And the serpent is not at its roots but in the garden at large.

Mythologist Golan points out how the world tree pattern is also seen in eastern cultures where the Rig-Veda and Edda hymns describe a snake dwelling in the roots of a tree which reaches unfathomed depths, along with birds connected with its upper levels. The Norse tree Yggdrasil has a viper named Nidhoggr at its roots, an eagle in its branches, and three wells that feed it; Mimir, Urd, and Hvergelmir.

The only place that the archetype of the world tree exists in the bible is in the Isaiah quote albeit evoked as a punishment for a wayward population. And truly all the elements are reversed; beautiful images of wildlife nesting and tending their young are made into images of horror and ugliness. Along with the screech owl are other wild beasts of the negative variety. For example, the satyr is variously described as a “demon-brute” or wild goat (I personally love goats but this one is clearly of the bad variety).

Below is the next passage, Isaiah 34:15 (from the New King James Version).

There the arrow snake shall make her nest and lay eggs
And hatch, and gather them under her shadow;
There also shall the hawks[1] be gathered,
Every one with her mate.

Even the placement of the tree (where all this nesting is occurring) is turned from lush garden to dry forbidding desert. We do know that there was once water because of the mention of islands, a place, by definition, surrounded by water.

Focusing on Lilith’s name gives us beautiful clues to Her essence. The most familiar connection of liyliyth (Strong’s #3917)is to the Hebrew word layla which means night. Other words etymologically connected with Lilith’s name are the Libyan lilu/water, Lithuanian liete/to pour and lyti/to rain. To Golan, these “suggest that Lilith of the Ancient East was a vestige of the goddess of heavenly moisture, older than Sumerian mythology, i.e., the Great Goddess.”[2] Her very name brings us back to living waters and moisture.

But Lilith didn’t just nest in the branches of the tree, she also lived in the trunk as did Eve and other Middle Eastern Goddesses. In fact, the tree of life in Eden is named after Eve. Eve, in Hebrew, means life. It could functionally be called “the tree of Eve.” The Goddess living in the tree, is one of Her many facets and an element that identifies Her as a Great Mother Goddess.

In many societies, the tree is considered to be the ancestor of humankind. As religion scholar Mircea Eliade writes there is often a mythological ancestor related to or born from the cosmic tree.[3] We still speak about our ancestors as being “the roots” of our “family tree” of which there are many “branches.” This certainly gives a literal meaning to the phrase “tree of life.” There are even passages in the bible which explicitly recognize humanity’s connection:

And he shall be like a tree planted by the rivers of water,
that bringeth forth his fruit in his season;
Psalm 1:3

With Lilith’s relationship to birds, trees, tree trunks, and water, She is clearly an ancient Great Goddess whose beauty and power were reversed, making her into something evil and cursed; not all that different than the treatment that Eve received.

Image: Isis as tree goddess providing nourishment in the form of fruit and drink. From the tomb of Pashedu from the 19th dynasty (1314-1200 BCE).

Next up: Another tree goddess from the bible.

Janet Maika’i Rudolph. “IT’S ALL ABOUT THE QUEST.” I have walked the spirit path for over 25 years traveling to sacred sites around the world including Israel to do an Ulpan (Hebrew language studies while working on a Kibbutz), Eleusis and Delphi in Greece, Avebury and Glastonbury in England, Brodgar in Scotland, Machu Picchu in Peru, Teotihuacan in Mexico, and Giza in Egypt. Within these travels, I have participated in numerous shamanic rites and rituals, attended a mystery school based on the ancient Greek model, and studied with shamans around the world. I am twice initiated. The first as a shaman practitioner of a pathway known as Divine Humanity. The second ordination in 2016 was as an Alaka’i (a Hawaiian spiritual guide with Aloha International). I have written three books: When Moses Was a Shaman, When Eve Was a Goddess, and One Gods. In Ardor and Adventure, Janet.