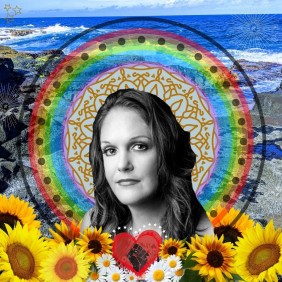 As the American Embassy was bombed in 1999, I was hunkered in a Russian Orthodox Church, gazing at the brooding, whitewashed faces of icons, hands raised in endlessly frightening benediction. Hundreds of men met my eye, as I found myself asking, “Where are all the women?” In 2005, the sun peaked over the horizon on Mount Sanai as I entered the chapel at Saint Catherine’s Monastery, which houses the oldest collection of Christian orthodox icons in the world. As a sensory overload accosted my eyes, ears, and nose, I scanned the scene to find only two women crammed among all the icons; one was a nameless daughter sacrificed by her own father. Where were all the women? A few years later, I knelt at the Temple of 1,000 Buddhas in Thailand. Not a woman could be found. Where are all the women?

For over a decade, I’ve painted folk-feminist icons of revolutionary women from history and mythology, a subversively artistic attempt to answer my own question by painting the women who have been ignored, excluded, or strategically erased. From Pauli Murray to Sarasvati, Gloria Anzaldua to Papahanoumoku, this work continues to be a gift, joy, and a tremendous part of the mission of my non-profit, the Tehom Center, which empowers marginalized women by teaching about revolutionary women through art, writing, retreats, and academic courses.

Learning these histories and legends is a vital part of empowerment, a corrective mechanism rooted in the radical imagination of intersectional feminism. So, too, I have learned, is seeing reflections of ourselves as sacred, valued, and worthwhile. So, I’ve started a commission project called Subversive Sister Saint Series series to do precisely this. Here, photography and digital design meet heart and halo (or aura if you prefer), a creative canonization process that celebrates the innate worth residing within us all.

This series of commissions features everyday revolutionaries—Sister Saints, Holy Family Icons, Holy Drag Queens, and Holy Helpers—as icons worthy of respect, love, and celebration. We may not find ourselves in history books, stained in glass, or the centerpiece of an epic myth, but we do revolutionary acts of goodness and grace, protest and proclamation that are worthy subversive canonization!

This series invokes everyday contemporary women (this, of course, includes transwomen) into the subversive sister sainthood. You can commission one of yourself, or as a gift for someone else. Invoke, honor, and own the holiness and worth that dwells within with a tangible reminder of your worth. This series is also open to anyone who identifies as gender non-conforming, gender queer, or gender non-binary. Here, after over a decade, I decided to canonize myself into this subversive sainthood. 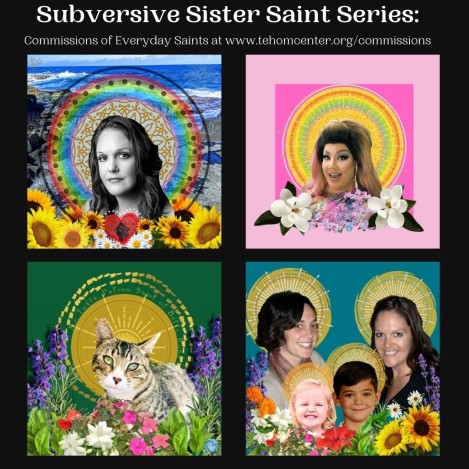 The idea of the “holy family” has been used as a discriminatory litmus test to exclude, damn, and oppress marginalized families. This series seeks to lift up families who have had their legitimacy legislated, voted upon, or debated by politicians. If your family has been excluded, or subverts the status quo, I would love to create a portrait of your family as a Holy Family Icon. Featured here is my own queer family, filled with adoption, foster care, and deep trauma histories. 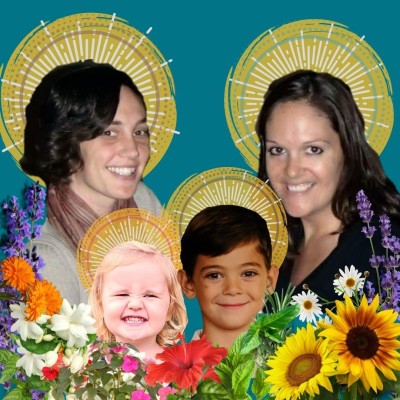 It’s no secret that drag queens have often been maligned and excluded within religion. Holy Drag Queens elevates the amazing queens who do sacred work in reminding all humanity of our dignity, fabulousness, and self-worth. Featured here is Miss Terra Cotta Sugarbaker as she leads Drag Queen Story Hour at the Atlanta Mayor’s office and encourages us all to vote with Drag Out the Vote!

Holy Helpers: Animals Among Us

This series captures the sacredness of the animals in our lives. A vital part of subversive spirituality, these icons are a visual voice for the voiceless. Featured here is my family’s sweet kitty, Mr. Tickle, Patron Saint of Belly Rubs. While such a series may appear trite on the surface, it’s imperative to remember the sacred role animals play in the circle of life. Countless people have shared with me that there are points in their lives when they would not have kept living had they not had a pet to care for. Holy Helpers is a way to visually honor these lives. 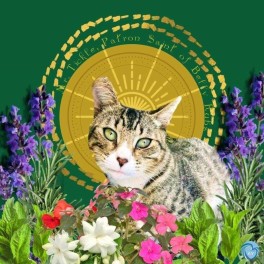 In the meantime, claim your own sacred worth. Grab a sheet of paper and some crayons, markers, or colored pencils. Draw a big circle and fill it in with your own aura or halo. Cut out the circle, hold it behind your own holy head, and take a look in the mirror! You are beloved, sacred, and worthwhile, subversive sister saints!

Rev. Dr. Angela Yarber, with four publications listed among the Top LGBTQ Religion Books, is the author, artist, and Executive Director of the Tehom Center non-profit, and teaches an online course on Queer Spirituality: Global Perspectives.

Like Loading...
‹ My Brother John—1949-2020 by Esther Nelson
Mourning with the Goddesses, Now More than Ever by Carolyn Lee Boyd ›