The current pandemic has kicked our collective butt by putting a huge dent in our ability to maintain relationships so necessary for keeping our social gears greased and running smoothly.  Grabbing coffee with a friend or meeting up for lunch in order to “catch up” with one another are activities that in times past we took for granted.  Meetings nowadays (both work related and social) are done primarily via Zoom.  Even a doctor’s visit can be accomplished electronically—a mode that, in my opinion, leaves much to be desired.

Besides feeing socially deprived over the past year, I’ve experienced a number of other losses.  I’ll mention a few of them, but am not prepared to write about the ones that sting the most. I gave up my house in Richmond, Virginia, and moved to a high-rise condominium just down the road.  I’ve yet to make it “home.”  Halfway through the Spring semester, all classes at the university where I taught went online. The Fall semester followed suit, delivering classes (mainly) online.  I didn’t want to box myself in on a screen.  I find classroom interaction meaningful in a way that I cannot replicate on Zoom.  I gave up teaching.  In August, I drove to Las Cruces, New Mexico, and have been here ever since except for a brief visit in September to New Jersey for my brother’s funeral—another loss.

There have been some positive happenings as well.  In New Mexico, I live two doors down from my daughter and son-in-law.  Even though most of the state is shut down due to COVID-19, my yard has been spruced up with new rock and cacti.  I now enjoy sitting outside under the pergola.  The midday sun warms me down to my bones.  Our small family gets together for “happy hour” every evening—something that helps us feel whole. 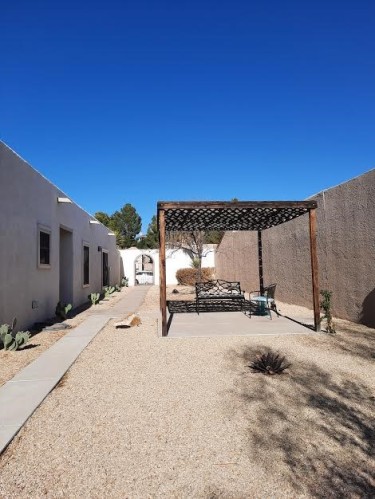 But still, this calendar year has been shrouded in grief—a grief I feel viscerally.  I began seeing a therapist in February.  She asked, “Why are you here?”  I simply said, “Grief.  It’s overwhelming me.”

I recently read Kathleen Glasgow’s YA (Young Adult) novel, How to Make Friends with the Dark, a story about 16-year-old Grace attempting to just get through every day after her mother suddenly dies.  I understand Grace when she looks into the mirror and says, “…the girl who stares back looks haunted, like she’s been scooped out from the inside, like she’s lost twenty pounds in a day….I rest a hand on my chest.  How is it physically possible for a heart to be beating so fast and a person doesn’t die?  I feel like I’m going to split open any minute.”

At her mother’s funeral, Grace experiences “[t]he wet cement feeling….A thousand bricks on my chest….A whole canyon forming in me, immense and desolate…. I have no idea how I am going to live with such a giant piece of sadness in my body all the time, knowing it will never get any smaller.”

Grace resists attending a “grief” group led by one of her high school teachers because “Adults always say they want you to tell them how you feel, but when you do, they mostly just tell you to try to feel another way….It would be nice if once, someone would just say, ‘Girl, you are in the shit and you will not be getting out soon.  So here’s how to make friends with the dark.’”

Viktor Frankl (1905 – 1997) was an Austrian neurologist, psychiatrist as well as a Holocaust survivor.  He’s probably best known for his book Man’s Search for Meaning.  He founded the school of what he named “logotherapy,” healing through finding meaning.

This is one of Frankl’s famous quotes:  “A man’s suffering is similar to the behavior of gas. If a certain quantity of gas is pumped into an empty chamber, it will fill the chamber completely and evenly, no matter how big the chamber. Thus suffering completely fills the human soul and conscious mind, no matter whether the suffering is great or little.”

Frankl’s solution is to seek meaning in whatever circumstances you find yourself.  His popular book gives an account of Frankl himself discovering meaning while suffering in the Nazi concentration camps during World War 2.  Frankl channeled what energy he had to move forward with meaning and purpose.

All well and good, but how does one accomplish that?  I think that at times when we suffer from overwhelming grief, we are so intent on getting over it that we don’t allow ourselves to sit with our grief and feel the anguished sadness.  Perhaps we could then express (painting, writing, and dance come to mind) that raw pain that sits like “a thousand bricks on my chest.”

Maybe rituals surrounding death and loss nourish a friendship with the dark.  “Shiva,” a Jewish ritual, allows space for people to grieve the death of a loved one as friends and relatives gather with the bereaved family for seven days to mourn and pray.  The community helps to sustain those who have suffered loss.

In Argentina, where I grew up, many women wore black for a year after the death of a family member.  Men wore a black armband when they experienced the passing of a relative or friend.  It signaled that the wearer was grieving and temporarily fragile.

Slogging through the messiness of grief is foreign to me.  My fundamentalist upbringing frowned on paying any attention to sadness.  After all, look how God cares for the birds of the air and the lilies of the field.  We had no mourning rituals.  The deceased went immediately to Jesus’ arms.  What’s to mourn?

I, like Grace, would like to be able to make friends with the dark, move through the mire of sorrow, and then come out on the other side transformed with renewed energies for living life more fully.  Perhaps a first step is to just sit with the dark and open up myself to its possibilities.