Home › Activism › For the Love of Gaia by Jassy Watson

For the Love of Gaia by Jassy Watson

On January 26, 2013 a rare, devastating tornado hit our community in Queensland, Australia, a coastal town on this sub-tropical coast. My family experienced nature’s elemental force firsthand and hopefully will never again. The tornado viciously shattered houses, peeled away roofs, uplifted cars and trees, and took down power lines, tearing apart everything in its path. With absolutely no warning, literally out of the blue, it formed over the churning sea, rapidly intensifying before striking land, awakening the vulnerability and fragility of all life in its midst.

When it struck, our four kids and I were waiting in our car while my husband ducked into a mate’s house to borrow a tool. We heard the sound of a roaring jet plane overhead, as my husband came running, screaming at us to get out of the car. Turning to my left, in a vision imprinted forever, a spiral of debris flew toward us. Scrambling, we got the kids out of their harnesses and safely indoors. I lagged behind, taking care of the children first, and fell out of the side door of the van with the wind’s impact. As I got up to run, a large piece of roofing tin flew straight for my head. I dove, seeking safety under the front of our running car. My life flashed before my eyes. All of us in a state of shock, the tornado was gone as quickly as it had come, we were unscathed except for a few minor cuts and bruises. It was only a few moments before the immediate danger passed. We ventured outside to inspect the damage, destruction surrounded us.

Catastrophic events unfolded over the following days, as the worst regional floods on record engulfed our community. The Burnett river burst its banks in a raging torrent, destroying everything in its wake: houses, livestock, cars, and household contents. All manner of things floated downriver, turning the nearby sea murky and muddy. The community suffered immense grief: thousands of people homeless overnight, livelihoods and memories—for some, taking a lifetime to build— washed a way in moments. “Why us?” some asked. If a divine presence exists that cares for us and loves us, why would we be subjected to so much tragedy and trauma? Events like this either further cement our faith, or lead us off course, disenchanted with the meaning of life and its divine purpose.

Not only am I grieving for our community, I am overwhelmed with grief for Mother Earth. Humanity’s destructive imprint on this planet has become even clearer as I witnessed this disastrous event. I couldn’t stop thinking about where all the stuff washed out to sea would eventually end up. What damage will it cause to our delicate ecological system? In addition to the countless material items, agricultural chemicals now further polluted the sea, including pesticides, herbicides, fungicides and fertilisers; agtryine, dimethylamine, deithanolamine, paraquat dichloride, amitrole, tralkoxydin, atrazine, permethrin, difenoconazole, terbutryn, fipronil, and butanone. Dangerous industrial chemicals were added to the polluted mire, including; methyl isocyanate, parathion, arsine, phosphoryl trichloride, phosgene, acrolein, hydrogen selenide, methyl hydrazine, phosphourous trichloride, diborane, bromine, fluorine, hydrogen cyanide, nitrogen dioxide, chlorine, sulphur dioxide, sulfuric acid, and on and on. The list is endless and all of it washed out to sea, which fast became a toxic soup. The “authorities,” as always, played down the environmental damage, telling us the ocean and rivers would recover. But will they? And to think that this is just one town from across the globe and these incidences are happening more and more frequently!

I can’t help but ache inside over the chemical warfare that we are waging on the planet. It is really difficult not to fall into a depression over it. Will we ever wake up to realise that the way most people are living is unsustainable? Poisoning the earth body poisons our bodies. In Gaia and God, Rosemary Radford Ruether alarmingly states that by 2030 pollution and over population will be so dreadfully endemic that it will very likely be too late. I hope that statistical evidence has improved since the 1994 publication of her book. Regardless, my heart fell heavy. I found myself caught up in the negative, forgetting about all the good being carried out in the world. (Carol Christ’s mission to save the wetlands of the Greek island of Lesvos is but one inspiring example.). I remind myself that I can exist inside hope and happiness alongside tragedy and suffering. It is possible to find peace that passes understanding. We must awaken to the fact however, that a culture of domination imperils the planet’s survival. Ruether argues that to heal the planet we must find a new set of symbols and language that transform “the interrelations of men and women, humans and earth, humans and the divine, the divine and the earth”. With this re-definition of relationships, it is hopeful that Gaia, the living, breathing entity that is our life force and the very source of our being, can be, to some degree, not only renewed, but respected. It takes people, communities, and nations to demand respect and unity for all living things. We can all take positive action and make a difference, no matter how small a gesture. Every commitment to action counts. 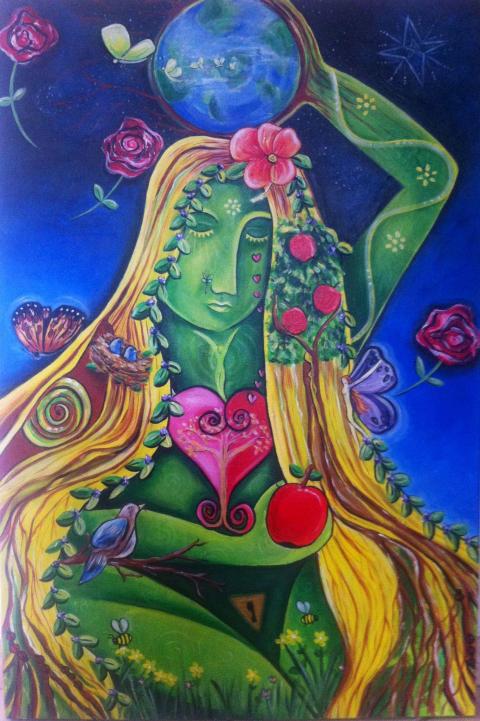 For the Love of Gaia Copyright, Jassy Watson 2013

I painted “For the Love of Gaia” in response to my overwhelming grief, as I witnessed the tornado’s destruction and contamination on our doorstep. It represents an element of my pledge to do more to help heal the planet and all her beings, to be committed 100% to repairing the web. This painting is a visual expression of the Earth as a living body, our bodies as living earth. We are One and connected to every living being and organism in the universe. I painted Gaia as abundant and healthy. In her heart new life grows in the form of a tree and the baby birds in their nest waiting for their mum to deliver the worm. The bees are pollinating and the lady beetles nesting. The roses symbolise how beauty can fade in an instant; life can change in a moment. The butterflies symbolise metamorphosis: birth, death, and rebirth. I’ve covered Gaia’s body in faint spirals, for she cries tears of love. The apple, here symbolises knowledge, love, health, and abundance. Her hair descends into the earth as roots and in her hand she holds us safe…or not, delicately balanced.

Gaia’s sacred triangle remains locked. Do you hold a key?

Jassy Watson, who lives on the sub-tropical coast of Queensland Australia, is a mother of four, a passionate organic gardener, an artist, and a student of ancient history and religion at Macquarie University, Sydney.  She runs a small business Goddesses Garden and Studio to keep women’s sacred circles, art, music and gardening practices alive.

Like Loading...
‹ Protecting our Families: How the U.S. Falls Short in Protecting New Mothers (and Fathers) by Michele Stopera Freyhauf
(Femen)ism? by Kile Jones ›