Home › Abuse of Power › Who Is Jephthah’s Daughter? The Sacrifice of Women and Girls by Carol P. Christ

Who Is Jephthah’s Daughter? The Sacrifice of Women and Girls by Carol P. Christ

er midrash on the story, I invoked Daniel Cohen’s powerful retelling of the story of Iphigenia.  Cohen concludes that Artemis told Agamemnon that his ships would sail only if he sacrificed his daughter not because she wanted him to do it—but because she hoped this challenge would induce him to realize that the costs of war outweigh any possible gain.

I suggested that these words be spoken whenever the story of Jephthah’s daughter is told:

We read this story not to celebrate Jeptheh’s terrible act, but to remind ourselves that every father or mother who goes to war or condones war is signifying his or her willingness to sacrifice not one but many beloved daughters, not one, but many beloved sons. 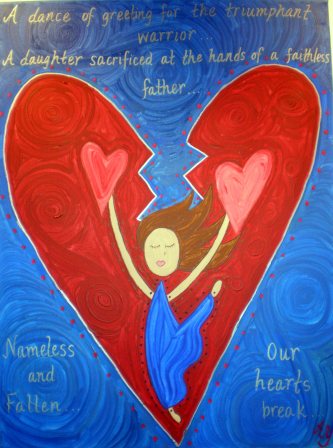 As soon as I completed my midrash on the text, I realized that it was incomplete. My midrash glossed over the fact that Jephthah and his counterpart Agamemnon each sacrificed a daughter.  When speaking of the story of Jephthah’s daughter as a “text of terror,” feminist commentators generally focus on the fact that in patriarchal societies daughters are considered as less valuable than sons, as property, and as expendable.  My midrash had not focused on the gender dynamics of the story.

We read this story not to condone Jephthah’s terrible act, but to remind ourselves that in patriarchal societies women and girls are considered expendable and are sacrificed every day on the altar of male power as domination.

The story of Jephthah’s daughter provokes us to question the world in which the story of Jephthah’s sacrifice of his daughter can become a sacred text.  In matriarchal societies, mothers were honored as the givers of life and no mother’s daughter and no mother’s son would ever have been sacrificed. The values associated with mothers—love, care, generosity—were the highest values.  Jephthah would have learned to honor his mother, his sisters, and his nieces.  He would have been taught to be gentle, he would not have been told he had to become a hero, and he would never have been conscripted into an army.  He would never have sacrificed his daughter on the altar war. 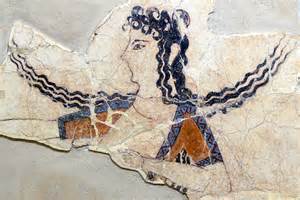 Let us bless the Source of Life.

Carol P. Christ  has been busy creating a newly released new website for the Goddess Pilgrimage to Crete which she leads through Ariadne Institute.  It is not too early to sign up for the spring or fall pilgrimages for 2014.  Carol can be heard on a WATER Teleconference.  Carol’s books include She Who Changes and Rebirth of the Goddess and the widely-used anthologies Womanspirit Rising and Weaving the Visions.

Like Loading...
‹ Beyond Clenched Teeth: Reflections on Forgiveness by Elizabeth Cunningham
How is it That God Speaks? by Kelly Brown Douglas ›