Spring arrived in the Northern Hemisphere and all of Goddess’s children are waking up from our winter slumbers.  Birds are singing, fruit trees are blossoming, bees are buzzing, and early spring bulb flowers are in full bloom.  Signs of spring fever are evident as we find ourselves full of energy and vitality for new projects and relationships.

As new life emerges from the Earth we can more easily reflect on our place in the greater scheme of life.  It’s a good time to question the values of our consumer society and ask if there is another way.

In contrast to these values of domination, separation, and consumption, ancient wisdom traditions teach that we are all connected – to each other, to all life, to the whole natural world and to the spiritual cosmos. 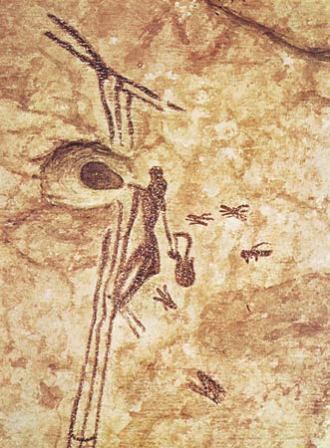 One canary in the coalmine that points out the lack of balance we have created with our industrial, military, consumer society is the disappearance and collapse of bee colonies all around the world.  This is something that we ignore at our own peril. Without bees we could lose 30% of our food crops.

The relationship between humans and bees dates back to prehistoric days.  Cave paintings found in Spain, from between 6000 and 80000 BC, depict our Neolithic ancestors gathering honey from wild bee colonies. 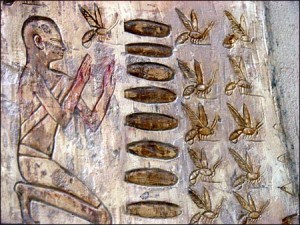 The earliest record of humans keeping bees in human made hives dates back to Egypt of 2400 BC.

The ancients believed that the bees’ ability to make honey was a gift from the divine.  Bees who give us their sweet honey, used for food, drink and medicine have long been associated with Goddesses all around the world.

detail from The Call of the Bee Goddess by Judith Shaw

In ancient Egypt the main temple of the Goddess Neith was known as the “House of the Bee.” She was often depicted as a veiled Goddess which perhaps was an allusion to bees, often called hymenoptera meaning “veil winged”. In truth the bees’ wings are beautiful lace-like fluttering veils.

The Greeks, who only knew how to collect wild honey, inherited bee keeping from the Minoans, who worked with and honored bees since the beginning of the Neolithic era. The Great Mother Goddess was often called “Melissa”, meaning “the Queen Bee.” In the myth and imagery of both cultures, associations of the Mother Goddess with the little honeybee are abundant.

Gold ring depicting the Bee Goddess and Her devotees, the melissae, from the grave of Isopata near Knossos, Crete

India’s ancient sacred text, the Rig-Veda, contains numerous references to bees and honey. The Indian Bee Goddess, Bhramari Devi, whose name comes from the Hindi word bramari, meaning ‘bees’, is said to make Her home within the heart chakra. Here She emits the buzzing sound of Bees. All across ancient India the humming of bees represented the essential sound of the universe.

Bees are also sacred to the Celtic Goddess Brigid. The ancient Celts believed that Brigid’s bees brought their magical nectar to earth from her apple orchard in the Otherworld.   Her power, manifesting through bees, endures through time. A Christianized version of Brigid, Gobnait, protected Her people with the help of bees. She thwarted a band of robbers attempting to steal the people’s cattle, by loosening a swarm of bees on the rustlers, sending them fleeing in terror.

Through working with bees I have learned personally what amazing community organizers they are. The ancients saw bees as beings that create order. Each bee diligently works their part of the community with cooperation and organization, ensuring the welfare of all. Perhaps the early Neolithic people, in whose hearts the Goddess reigned, were inspired by the honeybee to create their own communities on cooperation and harmony. While at the same time bees made the early agricultural societies possible through their work as pollinators of many of our favorite foods. Like the honeybee, the modern day Way of the Goddess is one that honors a balanced approach to living in nature; an approach that honors cooperation, harmony and work well done.

Now that spring has arrived, I rejoice in the return of the honeybees to my garden and in the magic of new life as it emerges from the dark, fertile Earth. The Bee Goddess calls us all to remember that through loving cooperation, focus and hard work, we can produce life’s sweet nectar. 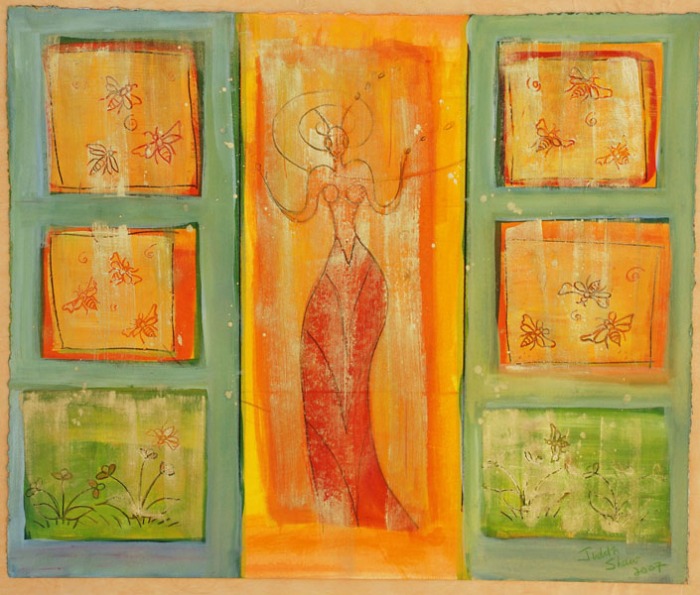 The Call of the Bee Goddess by Judith Shaw

Judith Shaw, a graduate of the San Francisco Art Institute, has been interested in myth, culture and mystical studies all her life.  Not long after graduating from SFAI, while living in Greece, Judith began exploring the Goddess in her artwork.  She continues to be inspired by the Divine Feminine in all of Her manifestations. Originally from New Orleans, Judith now makes her home in New Mexico where she paints and teaches part-time.  She is currently hard at work on a deck of Goddess cards. Her work, which expresses her belief in the interconnectedness of all life, can be seen on her website at http://judithshawart.com

Like Loading...
‹ My Afternoon with Amina Wadud: Some Pearls of Wisdom for a Warm Autumn in Santiago by Vanessa Rivera de la Fuente
IS EVIL PART OF THE NATURE OF REALITY AND DIVINITY? by Carol P. Christ ›