Home › Feminism › What If a Woman Played That Role? “The Martian” and Gendered Space Heroes by Sara Frykenberg

What If a Woman Played That Role? “The Martian” and Gendered Space Heroes by Sara Frykenberg

Sci-fi fan that I am, I recently went to go see the film The Martian, after hearing overall good reviews from friends and family alike. A ‘stranded in space’ film, The Martian considers the plight of fictional astronaut Mark Watney (Matt Damon). He is mistakenly left behind by his captain and crew who all believe he has been killed during a Martian surface storm in which they must flee the planet or risk their shuttle’s, most likely, immanent destruction.

This all said, if you want to watch this film without spoilers, stop reading now. I’ll give you a minute…

Okay, you have been warned! 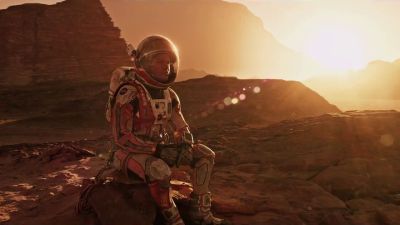 A classic hero type, Watney is strong and resourceful. He finds seemingly impossible solutions to his many problems, contacting NASA through the discarded and disabled Pathfinder probe, using nuclear waste to heat and power his rover well past its intended abilities, and even growing food within the habitat left behind by his Ares 3 mission team, using Mars soil, his own feces and potatoes. (His strategy of eating microwaved potatoes with ketchup, by the way, was how I survived graduate school!)

Like many survival films, such as Cast Away or 127 Hours, the protagonist is able to overcome personal, physical and intellectual challenges in order to beat the odds and survive (yes, I told you there would be spoilers: Watney makes it home to Earth at the end). Mark is actually somewhat of a genius, as one might imagine astronaut training demands: he is a botanist who ‘dabbles,’ in engineering, mathematics and even computer-science based linguistics. Epitomizing the reasonable logic of a “man” of the enlightenment, Watney can solve any problem that he, with a team of NASA experts, puts to his mind. “Man” triumphs over inhospitable nature even on other planets.

While my tone may sound critical here, I actually, really enjoyed this movie. I like to see the human spirit triumph and survive. However, when Mark’s proudly declared that he is the official colonizer of Mars partway through the movie, I was very disturbed. This assertion reminds me that the idea of the “human spirit” is too often dangerously mixed into Western discourses of power as dominance as self-preservation… a delusion that has been used to justify far too many atrocities, colonial and otherwise. And, as is often the case after seeing a movie where “man’s genius beats the universe,” I also found myself wondering, how would this film have been different if a woman was cast as the lead?

I brought this question up while at dinner one night and my father-in-law responded, “Nothing would change;” but I’m not so sure. I’m also not so sure that I would want nothing to change, because a man’s experience does not represent a constant or universal for human experience (nor does a woman’s experience).

For instance, we watch the slow deterioration of Watney’s body due to mal nutrition—I wonder, would a female astronaut, keeping a video-log like Mark, remark on the inevitable cessation of her menses? Where the movie depicts a man’s facial hair growing long and wild, would the shower scene for a female lead show her unshaven armpits, bush or leg hair?

How would a female lead’s deteriorating body compare to that of the thin body double for Mat Damon? Would audiences be as horrified by her emaciation when images of women’s emaciated bodies appear everywhere in popular media as a standard for beauty? Or would the actress have to be depicted as so thin that her experience reads more as starvation in order to evoke the same reaction? I read an article once in a fashion magazine about a model who had beat cancer and eventually realized that she was sabotaging her own recovery because her thinned-down body, devastated by chemo therapy treatments, opened up many professional opportunities for her. Would there be someone in the audience thinking, “at least she’s finally reached her ideal weight?”

The question I find myself considering the most is whether or not directors would depict this woman with equivalent genius and logical reasoning. As my husband reminded me, there are female survival stories. He joked with me, “Like The Dissent:” a horror film where terrorized female spelunkers try to survive as they are hunted by strange creatures. Okay—when we introduce the horror genre into this discussion, I do have to admit that there are many female survival stories; but our culture’s fetishizing of the pursuit, torture and terrorization of female victims is far from the “man triumphs over nature” hero story. My question is less, do American audiences want to see a woman survive, and more, how do they want to see her survive?

Would audiences accept a ‘Mary Watney,’ who was able to calculate the rations and potato growth necessary for the four years of her survival? Would a director show her making the same exciting intellectual discoveries, discoveries that capture viewer’s attention and give them hope when Mat Damon is making them? I would like to think that a woman could be depicted in this way—however, comparing The Martian to another recent space survival story, Gravity, I fear this is not the case.

Many people I’ve spoken with agree that The Martian seems more “realistic” than the over the top, action packed, space-daring of Dr. Ryan Stone’s (Sandra Bullock’s) survival in the 2013 film Gravity. And while given a male name and professional expertise, Bullock’s character is far from the space-ready “rational man” that Damon plays. She is nervous in space and largely untrained for the environment, contrasting Watney’s competence. She does not have equivalent technical expertise ‘only’ being a doctor of biomedical engineering after all, whereas Damon’s character, a botanist, seems a “jack of all trades.” And to top it all off, she largely owes her survival to the sacrifice of her superior officer, veteran Matt Kowalski’s (George Clooney’s) self-sacrifice in which he cuts his tether to her in classic hero style so that she might live. Stone then survives by a series of lucky risks that don’t even attempt scientific accuracy (imposter syndrome anyone?), showing her guts, her ability to transcend her despair and, in a delusional state, the male personification of her logical mind through the reappearance of Kowalski.

So, a woman has been depicted in this role… but the effect was rather different. While I don’t want to see women portrayed as identical to men in science fiction roles, I would like to see a smart woman with the equivalent training and expertise demanded of those in space programs. I would like to see a brave woman who is a problem solver.

In her classic book, Diving Deep and Surfacing, Carol Christ reminds us of the importance of hearing stories about women told by women themselves. I would love to watch a movie about being “lost in space” written and directed by a woman. Women are telling these stories, showing the diversity with which womankind approaches these issues. But what if we more readily saw women playing these roles? I, for one, would love to be a part of this audience and to see how our stories might change.

Like Loading...
‹ Microaggressions and the Grimké Sisters: Between Painting and Writing by Angela Yarber
Friendships That Save Lives: For Rita M. Gross 1943-2015, by Carol P. Christ ›