The Reindeer Goddess by Judith Shaw

Winter Solstice in the Northern Hemisphere is the day of the least daylight and the longest night. Long before Christmas our Northern European ancestors celebrated the Winter Solstice, the moment that heralds the return of the sun and with it the promise of new life in spring. Without the comforts offered by modern technology, this time of year must have raised fears in the hearts of our ancestors; fear that the sun would not return to its summer glory, fear that there would not be enough food for the winter, fears that surface most easily in the dark. A celebration of light would have been most welcome and needed.

The longest night was called “Mother Night” as it was during this time that the Goddess worked her magic to nurture the seeds laying dormant in the dark womb of earth so that new life could emerge in spring. It is a time to celebrate the eternal cycle of life, death and rebirth.

Saule, the Lithuanian and Latvian goddess of light and the sun, took to the skies on the Winter Solstice in a sleigh pulled by horned reindeer.  She journeyed with the aide of Her smith, who forged a golden cup in which to catch Her tears which then transformed into amber. During Her flight through the heavens she threw these pebbles of amber, like little bits of sun, and apples down to the world of humans below.  She was a spinning Goddess who used her skill to spin the rays of sunlight onto the world. 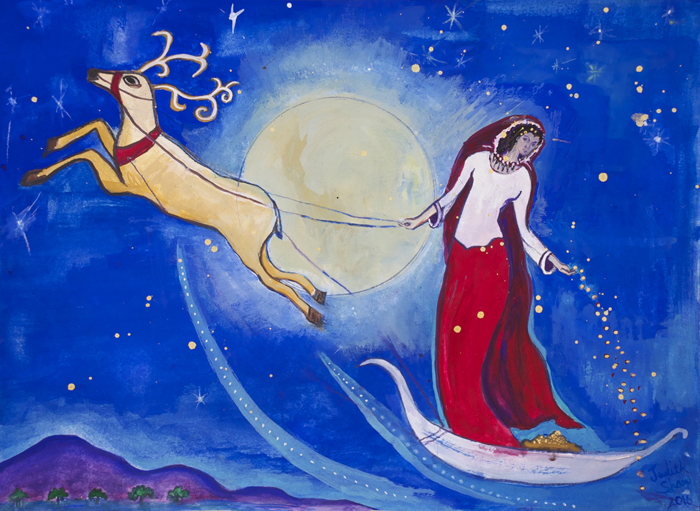 Saule ruled all parts of life, determining life, death and the well-being and regeneration of all.  She was the sun, riding every day in Her chariot across the sky. She also welcomed the souls of the recently departed into Her apple tree in the west.

Beiwe was a Sun Goddess of the Sami or Lapps, the indigenous people of the Nordic countries. The Sami were reindeer herders who relied on the reindeer for their survival. Beiwe, Sun Goddess, nourished them and their herds and helped Her people maintain mental health during the difficult months of darkness. She flew through the heavens with her daughter, Beaivi-nieida (sun maiden) in a ring of reindeer antlers flinging fertility and life back onto the land. On Winter Solstice Her people  smeared offerings of warm butter on doorposts to help Her gain strength for her flight high into the sky. Beiwe, like Saule was associated with spinning. Spinning wheels and flax were left as offerings on Her altars.

The Norse goddess, Frigga (Freya) was also a spinning goddess. She sat at her spinning wheel during the Winter Solstice weaving the fates of the year to come. This celebration was called Yule, from the Norse word for wheel. Christmas is often called Yule or Yuletide. The Christmas wreath was adapted from Frigga’s “Wheel of Fate,” symbolizing the cyclical nature of life.

Rozhanitza, Slavic Winter Goddess is also associated with reindeer and the Winter Solstice. She is

depicted as a horned Goddess with reindeer antlers. Folk art of red and white embroideries were made of Her for solstice celebrations. On Her feast day, December 26, cookies made in the shape of deer were given and eaten for good luck.

Reindeer are the only members of the deer family whose females have horns and are stronger and larger than the males. The males shed their antlers in winter, leaving it to the Deer Mother to fly through the long, dark night of Winter Solstice. The Reindeer was a sacred animal to our ancient ancestors of Northern Europe. The doe was seen as the giver of light and life. Their horns were associated with the tree of life and often times they were depicted carrying the sun, the giver of life, in their horns.

The Reindeer Goddess, gouache on paper, by Judith Shaw

Esther Jacobson in her book, The Deer Goddess of Ancient Siberia, concludes that the deer images found throughout the early nomadic and semi nomadic cultures of the vast steppe and mountainous regions of Eastern Europe and Asia are evidence of a Deer Mother as the source of life and death. Monolithic “Deer Stones” are found through out this region, carved with stylized depictions of reindeer as if in flight.

Horned Goddesses are found in the Celtic world also. Elen of the Ways, in Her most ancient form was the Guardian of the Leys, the ancient track ways. In Her guise as the Horned Goddess, She led the way on the migratory tracks of the reindeer.

We can learn from the wisdom of the past, a time when humans understood more clearly our tiny part in the cosmic web of life. and the necessity of honoring the earth and all its life. At this time when the shadow side of human nature once again seeks dominance through naked self-interest and the promotion of fear and hatred of others, let us remember and honor the Ancient’s belief in the Reindeer Goddess, the Sun Goddess and the Mother’s Night when She both flies high in the sky and dives deep into the earth to nourish and promise a renewal of life in the coming spring. Though it may be dark now, the light will return.

Postscript – While I was working on this article, news broke about the death of thousands of reindeer due to the warming of Siberia. Read a report on that situation on Huffington Post.

Judith Shaw, a graduate of the San Francisco Art Institute, has been interested in myth, culture and mystical studies all her life.  Not long after graduating from SFAI, while living in Greece, Judith began exploring the Goddess in her artwork.  She continues to be inspired by the Goddess in all of Her manifestations. Originally from New Orleans, Judith now makes her home in New Mexico where she paints and sells real estate part-time.   Give yourself the gift of one of Judith’s prints and paintings, priced from $25 – $3000.