Brigid, Goddess of Healing, Poetry, and Smithcraft by Judith Shaw

Brigid, the Celtic Goddess of Healing, Poetry, and Smithcraft, begins her reign on Imbolic, February 2, the midpoint between winter solstice and spring equinox. On this day the ancient Celts held their Fire Festival in honor of Brigid and the growing light. In Scotland, as recently as the mid-twentieth century, houses were cleaned and the hearth fires rekindled on February 2, to welcome in  Brigid.  Remnants of this festival are found in America today on Groundhog Day.

Like the Cailleach, She existed in many places and  was known by many names.  The Irish called her Brighde; she was Bride in Scotland,  Brigantia in Northern Britain, and Brigandu in France.  Some called her Brid, Brig or Brighid.  Later she was transformed by Christianity into Saint Bridget.  Her older name was BREO SAIGHEAD.   Her name has various interpretations, many relating to fire – “Power,” “Renown” “Fiery Arrow of Power ” “Bright Arrow”, “The Bright One”, “The Powerful One”, “The High One” and “The Exalted One”. 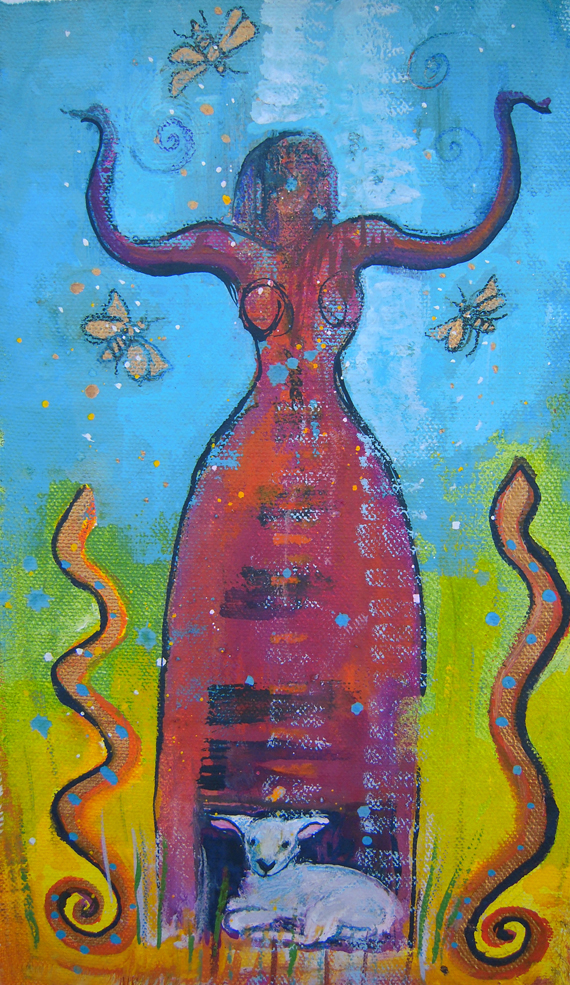 As a triple goddess She reigns over three aspects of life, all united by fire.  Her  sacred flame is symbolic of the creative principle. In Kildare, Ireland, Brigid’s shrine had a continually burning sacred fire, even after the shrine became a Christian nunnery.  Finally in 1220 it was extinguished by the orders of Archbishop Henry of Dublin.

As a Sun Goddess, born at the exact moment of dawn, she bears the gifts of knowledge, inspiration, and the life force and healing energy of the sun.  She is complete within herself.

1.   Fires of Inspiration – poetry, learning, divination, witchcraft, occult knowledge and prophecy.  In this aspect She appears as a poetess and a muse.
2.   Fires of the Forge – smithcrafts, blacksmiths, goldsmiths, housecrafts. In this aspect she is seen carrying her famous cauldron used for melting metals.  She may even date back to the beginnings of pottery and its firing. Through this forge aspect She is also associated with the martial arts, as a warrior goddess, who forges spears and arrows.  A smith creates anew and fixes broken things.
3.  Fires of the Hearth – medicine, spiritual healing and fertility, midwifery, inner healing and vital energy. In this aspect She is known as the Goddess of Healing.

Before the Celts, as far back as 3000 BCE, Brigid was known as a spring and summer goddess who shared her rule with the Winter Goddess, Cailleach. Another clue suggesting Her importance to people of the Neolithic and late Stone Age is that the  massive stones which make up Stonehenge and Avebury are known as Bridestones.

Through Her aspect as Goddess of Healing she is also associated with water.  She rules over sacred wells, where the womb of Mother Earth opens to the light of day.

She is identified with the changing moon. Her sacred animals are ox, boar, ram, cow and serpent. Her  reign begins at the time lambs are born. Bees are also sacred to Brigid. From Her apple orchard in the Otherworld, Her bees brought their magical nectar to earth.   People believed that small flowers and shamrocks appeared in Her wake.  New life springs up around Her.

“I am Brid, beloved of Erin, spirit of fire, healer of ills, warrioress of old, protector of life, woman of power, sovereign Mother of all creation. I create, I inspire, I make magick. I am old, I am young, I am eternal. I am the All-Power personified. I am me… Brid.”  –  (Celtic Myth and Magic – Harnessing the Power of the Gods and Goddesses by Edain Mc Coy, 65.)

In this season, allow Brigid into your heart.  Open yourself to inspiration and new creation.  Relish your alone time, allowing your fierce, warrior self to emerge, using Brigid’s gift for detail and creativity to resolutely fight the battle for good.  Embrace Her sacred discipline of work in all things you now approach. Notice small synchronicities which might bear prophetic messages.  Feel your connection to the divine feminine; feel yourself to be complete within yourself.

Judith Shaw, a graduate of the San Francisco Art Institute, has been interested in myth, culture and mystical studies all her life. Judith makes art, dances with abandon and experiences the world through travel and study. Her work, which expresses her belief in the interconnectedness of all life, can be seen on her website at http://judithshawart.com

Like Loading...
‹ Sustaining Feminist Spiritualities in the Seeming Absence of Community by Lache S.
Awakening to the Mystery of Absolute Beginnings by Carolyn Lee Boyd ›