As we enter Pride month, do you ever finding yourself wishing there were unabashedly queer resources to aid clergy and people of faith in nurturing spirituality, celebrating queer families, or offering liturgies that celebrated revolutionary queer women? Look no farther! The Holy Women Icons Project—a non-profit seeking to empower marginalized women by telling the stories of revolutionary holy women through art, writing, and special events—has created three such resources. Thanks to a generous grant from The BTS Center, these affordable and accessible online retreats and resources are available for clergy and laity alike. Check out these three offerings, along with the revolutionary seven queer women of color who inspired them!

HWIP’s 7-Day Online Queer Spirituality Retreat is an opportunity to subversively queer your spirituality, and for the LGBTQ+ community to celebrate our spirituality without having to translate it through the lens of heteronormativity. Open to everyone, the Queer Spirituality Retreat features seven different queer women of color: Pauli Murray, Frida Kahlo, Perpetua and Felicity, the Shulamite, Marsha P Johnson, Guanyin, and Gloria Anzaldúa. The most important part of the retreat is, of course, the revolutionary queer women who make it possible. So, allow me to briefly introduce you to seven queer women of color…

Pauli Murray was a queer black woman raised in Durham, NC. She was a civil rights attorney, coining the phrase “Jane Crow” to acknowledge the role of sexism in addition to racism in Jim Crow laws. In her sixties, she became the first African American woman ordained Episcopal priest. All the while she loved women, also claiming that if she could transition from Pauli to Paul, she would, thus providing hope and holiness, not only for women, lesbians, and African Americans, but also for transgender persons. Discriminated against because of her race, gender, sexuality, and gender identity, Murray was hope incarnate as she came out again and again, inviting us to consider “coming out” as a spiritual practice.

Frida Kahlo was a Mexican revolutionary, artist, and queer lover. Kahlo fell in love with both painting and Diego Rivera after a tragic bus accident put her in a full-body cast. Though she savored her role as the adoring wife of the “genius artist,” she was also a queer feminist, artist, and political revolutionary in her own right. One may say that Frida Kahlo was the inaugurator of folk feminist art, birthing the surrealist movement. Frida, a sexually fluid woman, pursued other lovers, and so did Rivera. Most famous among her lovers were artist Isamu Noguchi and dancer/singer/actress Josephine Baker. She painted her reality, inviting us to fully live into our own realities.

Perpetua and Felicity were North African women arrested for being Christian in the third century. Imprisoned together, there are stories that the two women—described as “dear friends”—held one another and kissed in their final moments before death on March 7, 203. Perpetua kept a diary, which is acknowledged as one of the first written documents by a woman in church history. Though Perpetua was married, her husband is conspicuously absent in her journals. Instead, it is filled with thoughts of Felicity. Gay historian John Boswell named Perpetua and Felicity as the Patron Saint of Same-Sex Couples. These two women had the audacity to love one another and their god at a time when neither was permitted, inviting us to consider the cost of queer spirituality.

The Shulamite teaches us to subvert spirituality. The Song of Songs is traditionally understood as a love poem between a man and woman. But the Shulamite, whose poem is found in Song of Songs 6-7, tells us something different because her lover was most certainly another woman. I first encountered the Shulamite in a passing reference by dance historian Wendy Buonaventura. She listed the Shulamite as an example of a bellydancer in the Hebrew bible. From there, dance history and Hebrew translation collided in the most unlikely way as queerness dripped off the pages of the sacred text. Since bellydance is historically a dance performed by women for women—where men are not permitted—it is most certain that the lover doting upon the Shulamite’s quivering curves was, in fact, another woman. As the Shulamite subverts traditional spiritualities associated with Song of Songs by Jews and Christians, she invites us to consider how we might subvert spirituality.

Marsha P Johnson  was a self-professed drag queen, sex worker, and gay liberation activist. She co-founded STAR, the Street Transvestite (now transgender) Action Revolutionaries with Sylvia Rivera. As a black trans woman, Marsha P has been overlooked as a formative presence in the Stonewall uprising and in the history of LGBTQ activism. Denied the privilege of marching in some of the first Pride Parades, she was often questioned by straight people, gay people, and the police about her sexuality or gender identity. Her response remained the same: “Pay it no mind.” This, she claimed, was what the “P” in Marsha P. Johnson stood for in her name. This patron saint of Christopher Street had courage to live authentically, as Marsha P invites us to “pay it no mind” when others wish to take away our pride. 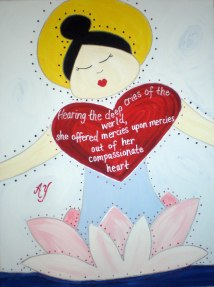 Guanyin is the Buddhist Goddess of Mercy and Compassion. In the Lotus Sutras, she originates from a bodhisattva named Avalokitesyara. Avalokitesyara is identified as male in the Lotus Sutras. Overtime Avalokitesyara transitions from male to becoming Guanyin, most often portrayed in feminine terms and referred to as “she.” Many scholars assert that Guanyin is androgynous and can take on the form of any sentient being, no matter the gender. And this is how most people speak about Guanyin, as the divinely androgynous one who is often portrayed in feminine form. Placing her into the category of “androgynous” stems from cisgender privilege, though. This privilege does not view the world through transgender eyes; if only one reads Guanyin’s transformative story through her lens of compassionate mercy, one may notice it is a story of transcending the binaries that bind, offering a wide embrace. Because Guanyin has been and continues to be claimed as a trans icon for many in the transgender community, Guanyin invites us to consider how we might transcend the binaries that bind. 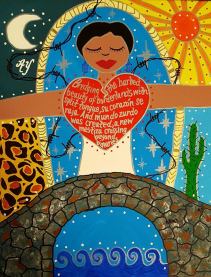 Gloria Anzaldúa was a scholar-activist who focused on the intersections among queer theory, feminist theory, and Chicana cultural theory. Born in the Rio Grande Valley of south Texas, Anzaldúa also bridged the borders of personal and academic writing, weaving together theory with lived experience, English with Spanish, and inviting readers into a new world—Mundo Zurdo—that transcended these seeming binaries. With split tongue, she code switched, building bridges broad enough to span chasms of differences, inviting us to build bridges at the borders of difference.

All seven of these revolutionary women offer the inspiration for these three Holy Women Icons Project’s Online Queer Retreats:

Whether it’s the 7-Day Online Queer Spirituality Retreat, Queer Families Retreat, or Queer Spirituality Resources for Worship Leaders, we hope you’ll join us in queering your spirituality and worship, and in celebrating these revolutionary queer holy women of color. Rage on! Be inspired! And take a look in the mirror to catch a glimpse at the fabulously queer holiness dwelling within.

Rev. Dr. Angela Yarber is the Founder and Creative Director of the Holy Women Icons Project. She holds a Ph.D. in Art and Religion. A professor of Women’s, Gender, and Sexuality Studies, she is the author of seven books. As an author and professional artist, she is creating a retreat center with her wife and child on Hawai’i Island as a part of the Holy Women Icons Project non-profit.

Like Loading...
‹ Game of Thrones is Over, Now What? By Anjeanette LeBoeuf
Spring Blossoming: The Holy Orchard as Goddess by Jill Hammer ›