Home › Christianity › The Philadelphia Eleven: A Documentary by Margo Guernsey

The Philadelphia Eleven: A Documentary by Margo Guernsey

Storytelling is as old as humanity. We tell ourselves stories – about who we are as individuals, about our families, and about our people – to understand who we are. A lot of narratives are told by a dominant segment of society at the expense of others. I am drawn to stories that flip the script. What stories about real people help us envision a world where all human beings can fulfill our God-given potential?

I practice listening deeply to stories. What is this person really saying about him or herself? What is the essence of what we learn from these events? It is never as simple as it seems. It can take time to find the soul of a story. 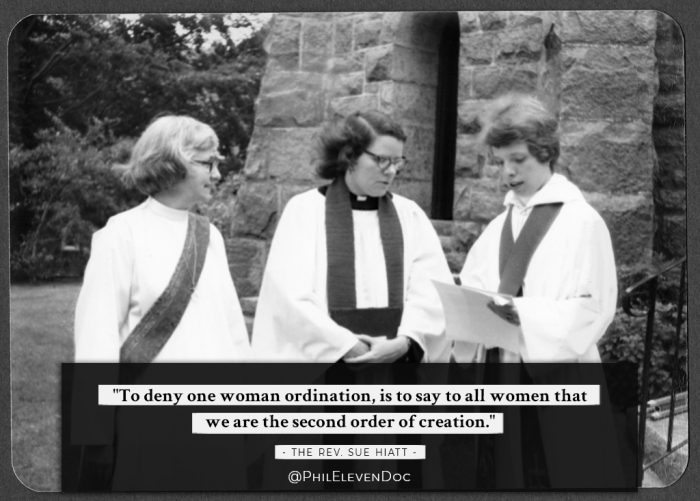 This story resonates. It is much more than the story of eleven women; it is the story of a path to liberation. What does it mean to be whole? How do we pursue our vocations, regardless of obstacles? How do we keep our integrity, when it feels like the easy answers ask us to compromise?

How do we stand up for justice in every moment, when life pulls us in so many different directions?

My team and I have been running a fundraising campaign to help bring this project to completion. In the past few weeks a community has come together to help tell this story by sharing and pledging fiercely. You too can join us on Kickstarter and help us support the project. The fundraising campaign is open until June 20th.

Click here to support The Philadelphia Eleven: A documentary film about the women who defied the leadership of the Episcopal church in 1974, and became the first women priests.

Margo Guernsey is a documentary filmmaker based in Boston, MA. Her feature directorial debut, Councilwoman is touring the country and will air on America Reframed, part of PBS’s WORLD Channel, in fall 2019. Margo began her film career in 2010 as a producer at WPBT2 (Miami), and produced and directed industrial videos in the Boston area for seven years. Over the past 20 years, she has worked as a union organizer, non-profit development director, Spanish/English translator and media instructor, always building multi-racial collaborations across class lines to inform the work of building a more just society. She has an MFA in Film (University of Miami), MA in History (Umass/Amherst), and a BA in History (Brown University).

Like Loading...
‹ Behaalotecha: Lessons and Questions for Feminists by Ivy Helman.
A Beary Peaceful Day Part One by Sara Wright ›

Categories: Christianity, Feminism and Religion, Women and Ministry, Women in the Church