This morning I was kneeling in front of my new wood stove kindling a fire from hot coals when I felt the presence of the Greek Goddess Hestia, Lady of the Hearth moving through the house. The goddess manifests as a crackling wood fire, and when I kneel before my wood stove to coax coals into flames I feel as if I am paying homage to her.

I have spent two winters without a wood stove, and have missed this ritual fall lighting of the fire, and the knowing that I am participating in ancient practice that extends back far beyond the Patriarchal Greeks to the dawn of humankind.

Today I felt her presence in a visceral way as I looked out the window at the first flakes of white snow disappearing into wet ground, and felt the hearth warming beneath my feet.

Hestia symbolizes the importance of creating sacred space within one’s home by honoring the fire that turns wood to ashes and re –kindles itself, resurrecting what was dead. This is also a time to give thanks for every tree that sacrifices itself to keep us warm… 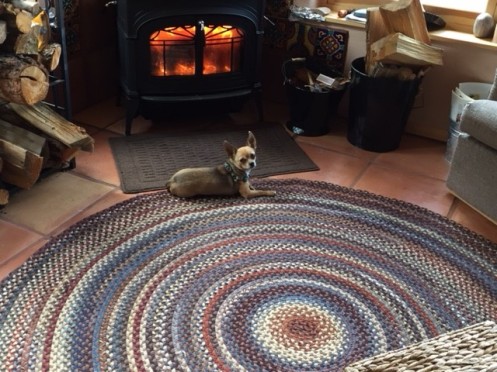 (one of author’s dogs, “Hope,” gravitates instantly to the heat of the wood stove)

Hestia’s name means “hearth” or “fireplace,” and her status shows how important the hearth was in the social and religious life of Ancient Greeks. Making and preserving fire was essential for early cultures, which made the household fire a sacred element at a very early stage of “her – story.” In later days, Hestia became its embodiment.

Hestia received the first offering at every meal in the household with families pouring sweet wine in her name and dedicating the richest portion of food to her.

The hearth fire in the household was not allowed to go out by any family unless it was ritually distinguished.

In the Greek myth, Hestia was one of three “virgin” goddesses; the other two were Athena and Artemis. I interpret this virgin aspect as being “one unto herself, indicating wholeness which has nothing to do with chastity. Athena was a goddess of war and got lots of attention, Artemis was Mistress of Wild Animals and also a great huntress. Hestia was acknowledged as Mistress of the Fire, and cultivator of the home place. Of the three goddesses she got the least attention, probably because the Greeks were a Patriarchal warring culture that valued men over women, and thrived on conquest, rape, and killing (power over). Honoring any peaceful nurturing goddess of the household was less important.

There is an interesting story about a potential rape of Hestia by a drunken god while she was sleeping. The braying of a distressed donkey awakened Hestia in time to ward off this atrocity and thereafter, on Hestia’s feast day a donkey that wore a garland was included in Hestia’s festivities. This intervention by a loving animal may carry a significance that is easily missed. Animals can represent women who are living in a state of wholeness because they have married instincts to awareness. To become en – souled is a holy undertaking that connects a woman to All That Is.

This winter I welcome Hestia as Keeper of the Fires into this house asking for her blessing, honoring WOMAN who tends the potentially transforming element of contained fire in her own home or realm.

Like Loading...
‹ May Love Rest You Merry this Solstice, As Darkness Holds Us in Her Grace
A Christmas Lament by Karen Leslie Hernandez ›